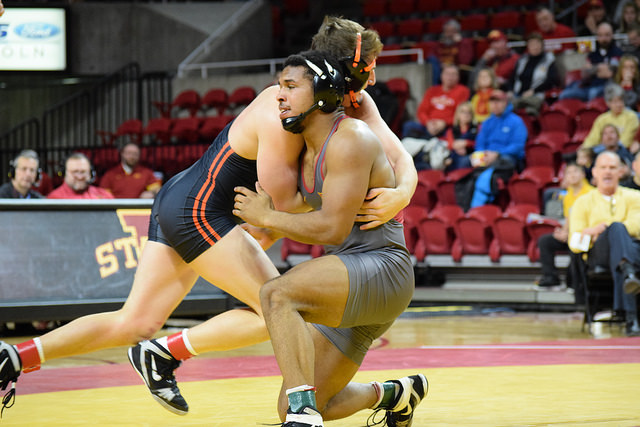 The Iowa State Cyclones look to continue their second half momentum this weekend when they take a road trip down to Oklahoma to face Big 12 rivals Oklahoma and Oklahoma State. Winners of five of their last six dual contests (their sixth dual win was an entire team forfeit) the Cyclones are in the middle of a hot streak that has seen contributions come from up and down the lineup. In their last dual against West Virginia the upperweights combined to go 4-0 for the first time this season, which led to a Cyclone upset.

Starting the two dual road trip off will be an Oklahoma team that looks to be in a very similar situation to Iowa State. One of the sport’s blue blood programs, Oklahoma has seen a sharp decline in postseason production, which resulted in school putting together a package that lured one of the nation’s top assistants, Lou Rosselli from Ohio State, and the team committed to its freestyle program stealing Oklahoma State’s second in command, Eric Guerrero. This mirrors the Iowa State team, who lured Kevin Dresser away from his on the rise to annual national prominence-program, Virginia Tech, and the hiring of Brent Metcalf from rival Iowa to head the freestyle program.

These two schools are in very similar situations, and in fact this was a topic of a recent Flo Radio Live episode, discussing the challenges both these programs face to return to former glory. Iowa State has been trending of late, while Oklahoma appears to be wrestling strong at this point of the season than they were back in November. The Sooners are coming off a 28-10 win over Northern Colorado (who beat ISU 22-20 in early January), but the Sooners also have a loss to West Virginia (who as we mentioned the Cyclones are coming off a win from).

This matchup took a turn for the worse for Cyclone fans as news broke yesterday that redshirt freshman Kanen Storr requested and was granted his release from the program. The Michigan product was figured to be a fixture of the future for Iowa State and given his youth and production on the mat he also looked to be one of the pieces Dresser could build around. With that all changed, it looks as though Kristian Vasquez will be the candidate to replace Storr in the lineup as he is the only other 141-pound wrestler on the roster.

Coming into the dual there will be four ranked wrestlers, with no head-to-head meeting between ranked opponents. Four of the weights in this dual have already faced off against their opponents this season, with the teams’ splitting, 2-2. On to the matchup previews.

The two weights where Sooners currently hold victories over potential Cyclone starters fall at 157 and 174 pounds with those matches occurring at the Lindenwood Open. At 157 pounds Justin Thomas defeated Chase Straw 6-4, and #13 Yoanse Mejias defeated Hank Swalla 10-5. Of note Dresser has used junior Danny Bush at 174 pounds more frequently than Swalla. Also, both Bush and Mejias are both standouts from the NJCAA division, in fact Mejias was a two-time national champion in the division wrestling for the Iowa based program NIACC.

The two Iowa State head-to-head victories come at 149 and 197 pounds where the Cyclones have two freshman that appear to be hitting their stride. The #17 ranked Jarrett Degen had his coming out party against Davion Jeffries, winning 11-6 at the Lindenwood Open which was Degen’s first college event as a Cyclone. At the time Jeffries was ranked in the top 20.

The other Cyclone taking a step forward is upperweight Sammy Colbray, who is coming off his biggest win to date where he downed West Virginia’s #15 ranked Jake Smith in the last dual. Colbray is definitely trending in the right direction and he will have a chance to continue his momentum against Andrew Dixon who he defeated 3-0 at the Lindenwood Open.

Other favorable Cyclone matchups will be at 133, 184, and 285 pounds. The duo of Markus Simmons and Ian Parker have been real solid of late, so regardless of who starts they will have a great shot at scoring Iowa State points against Jake Rubio at 133. The only senior in the lineup, Dane Pestano, has stung together his best wrestling of the season at 184 picking up victories in five of his last six duals. One of the heroes of the West Virginia dual, Marcus Harrington has also been producing winning five of his last seven dual starts.

The loss of Storr is going to be a tough blow for this team to recover from, especially considering they are already starting their fourth string at 125 pounds. Wrestle Stat projects Oklahoma winning this dual 24-9, however the computer predicts both Degen and Colbray to lose matches against opponents they have already defeated. If those two are able to repeat their November performances we could see a much tighter result, 18-15.