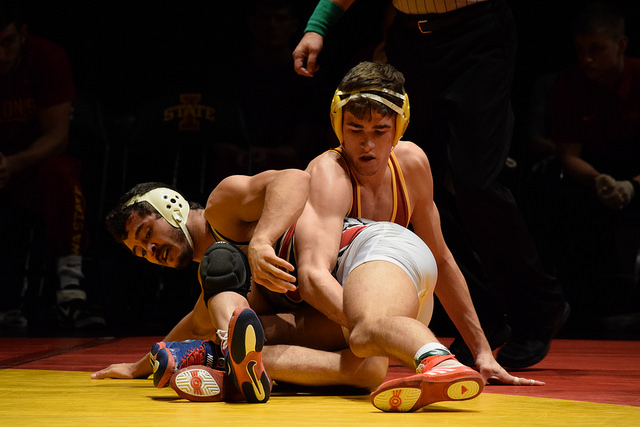 Coming off their conference defeat to Oklahoma 21-16, the Cyclones will continue their road trip with an even bigger challenge this Sunday when they head to Stillwater to face #7 Oklahoma State. One of the nation’s top dual and tournament teams, the Cowboys entered this weekend ranked #7 in both formats and they will be taking on #3 ranked Missouri tonight prior to facing Iowa State on the 28th.

The Cowboys come into this dual with eight individual ranked wrestlers and all but two of those carry a top ten ranking. This dual will feature the potential for two ranked head-to-head meeting in the lightweights, with the battle at 149 pounds being the best match to watch for on paper.

That’s because we will see rising freshman Jarrett Degen come into enemy territory looking to knock off the wrestler directly in front of him in the rankings, #16 Boo Lewallen. Since he stepped into the lineup in mid-to-late November Degen has been one of, if not the most consistent presence in the Iowa State lineup along with junior heavyweight Marcus Harrington. After taking a loss to Oklahoma’s Davion Jeffries, who was ranked to start the season, a win over Lewallen would be a perfect rebound for the young wrestler, especially considering Lewallen came out on top of their previous meeting this season, 13-7.

Speaking of Marcus Harrington, this dual isn’t full of wrestlers with a history of facing each other but the Cyclone and the Cowboy’s #11 Derek White go way back to their time as 197-pound competitors. These two first met back in 2014 where White came out on top of a tight 2-1 battle very early in their college careers. The more recent series win his held by Harrington, who won 3-2 when the pair met last January. This is a potential marquee win for Harrington if he is able to knock off a ranked foe.

Other Cyclones with favorable-to-even matchups on paper come at 157 and 184 pounds, where the Cowboys are without a ranked wrestler. Last night sophomore Chase Straw was able to even his season series against Oklahoma’s Justin Thomas where he came out on top 4-3. Straw’s Sunday opponent will be Jonce Blalock.

Finally, senior Dane Pestano will be looking to pick up a solid win over freshman Keegan Moore, who was ranked at one point this season. After qualifying for the NCAA tournament two seasons ago, this a match the holds some significance if Pestano wants to return to the championships. Last night Pestano was able to down Oklahoma’s Matthew Waddell 11-3.

With the departure of Kanen Storr from Iowa State’s lineup many wondered who would would be able to step into that weight. It appears Dresser has found his answer in Ian Parker, who is ranked #13 at 133 pounds but moved up in last night’s dual where he was victorious against Mike Longo. While many expected Parker’s move to 141 at some point in his career, the fact he is making the jump midseason shows just how tough the cut to the lower weight was and how confident Dresser feels his freshman will be able to make to bigger, stronger competition.

Wrestle Stat projects the Cowboys to come out on top of this contest, 34-0 though the Cyclones are more than capable of winning several matches.