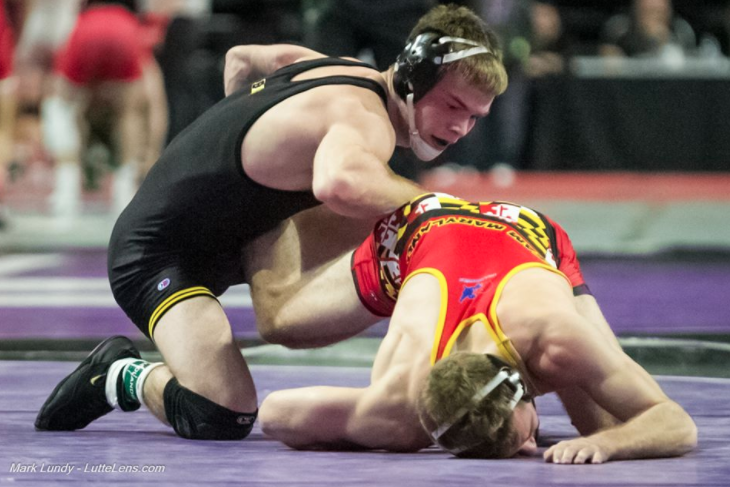 125: #4 Spencer Lee (Iowa) vs #16 Drew Mattin (Michigan)
1st: Lee whips Mattin over early in the period for a takedown, Mattin scrambles off his back so no near fall. They get back to their feet, Lee gets in on the legs finishes for his second takedown. Arm bar tilt for Lee and he picks up a quick 4 point near fall. Trap arm tilt for 4 more near fall for Lee. Mattin picks up a stall warning. Lee going for another trap arm tilt, 4 more near fall with :10 to. 14-0 Lee.

133: UR Paul Glynn (Iowa) vs #4 Stevan Micic (Michigan)
1st: Early takedown for Micic. Micic gets a leg turk and turns Glynn for a 4 point near fall. Stalemate break. Glynn is up and out on the restart. Micic drops levels and gets through’s Glynn’s hands for another takedown. Looks like Micic is trying to do a ball and chain on Glynn, but Glynn fights it off, end of period. 8-1 Micic.

2nd: Micic takes down, gets out to his feet and gets an escape. Micic in on a single, finishes the takedown. Glynn gets up, another takedown Micic. He lets Glynn out. Glynn warned for stalling as Micic drops on a sweep single he finishes for a takedown. Micic has a leg in looking for a turn. Period ends 15-3 Micic lead.

3rd: Glynn takes down and Micic cuts him to begin the period. Micic gets a stall point, and gets a cradle locked up for a takedown. Micic lets Glynn up. Micic looking for the final score, but doesn’t get it. Glynn gives up the major instead of tech fall, crowd applauds the final effort of fighting off the takedown.

141: UR Vince Turk (Iowa) vs UR Sal Profaci (Michigan)
1st: Turk in a single right away, Profaci takes him to the edge, Turk switches to a double and finishes a takedown on the edge. Profaci gets an escape off the restart. Profaci slips around Turk, but Turk able to get his hips squared around, Profaci now able to pick the single up to take Turk down. Turk gets his escape to tie the match, right in on a single, looking to catch the far leg again on the edge and gets it. Profaci gets an escape and right in on Turk’s leg, he can’t finish on the edge so a restart. Bloodtime now for Turk. Turk with another single leg takedown as Period ends Turk 7-4 lead. Crowd gets to their feet for that one.

2nd: Turk starts down, gets to his feet and gets his escape. Profaci drops down and powers into a single, Turk got caught with some slow feet, Profaci awarded a takedown on the edge. Turk gets up and out and the period is going to end 9-6.

3rd: Profaci takes down and is up and out quick. Turk shoots, doesn’t catch the leg, reattack for Profaci has him in on a single he finishes for 2. Turk gets out quick to retake the lead. Profaci warned for stalling after backing out of bounds on the edge of the mat. Another shot by Turk, Profaci counters and catches an ankle Turk gets out. Challenges coming here. Profaci grabbed Turk’s headgear which resulted in a technical violation. The almost takedown call for Profaci was erased due to the violation. They restarted the match with :09 left. Profaci finishes the takedown in that time to send it to SV.

SV: Takedown by Turk with a body lock for the win. Profaci got caught trying to go splits, and Turk caught him over on his back. Profaci bellied out to only give up takedown.

157: Jeren Glosser (Iowa) vs #7 Alec Pantaleo (Michigan)
1st: Glosser ends the first scoreless with Pantaleo, though he did get warned for stalling.

2nd: Glosser starts down, gets up to his feet, Pantaleo returns three times. After 1:19 Glosser gets his escape. He leads 1-0.

3rd: Pantaleo starts down and gets a reversal to go up 2-1. Glosser trying to come up to his feet. Pantaleo too tough on top for Glosser to get away. He finally does with under :10. Pantaleo takedown to ice the match.

2nd: Massa starts down and gets an escape, Bull gets :20 more seconds of RT. Marinelli back in a short offense situation, but Massa comes up to his feet. Period ends tied 2-2

3rd: Bull starts down, and gets his escape after about :19. Massa gets to Marinelli’s legs, but he fights it off. Marinelli looking go behind, but can’t get around. Back to their feet.

174: UR Kaleb Young (Iowa) vs #6 Myles Amine (Michigan)
1st: Young is the first wrestler to get to the legs, but Amine able to stalemate it. Neither guy able to get through the head hands of the other so ends scoreless.

2nd: Young starts down, works up and out in :08. Straight on shot for Young he catches the leg, Amine sprawls out and extends Young. Young pulls the leg in, but Amine able to stalemate it. Period ends with him up 1-0.

3rd: Reversal Amine nearly off the whistle. Amine now looking to turn with a leg turk. Young able to get back to his base and working up. Amine flattens him out again.

184: Mitch Bowman (Iowa) vs #5 Domenic Abounader (Michigan)
1st: Abounader in early, drops Bowman to his hip and comes over top for a takedown. Abounader tries a turk on Bowman, but Bowman able to roll out for an escape. Bowman takes a shot with :25 to go and is on a single, trying to pull it up but the period ends.

2nd: Abounader starts down, he gets to his feet and to the edge, Bowman warned for stalling for not returning Abounader quick enough but they go out of bounds. Abounader back to his feet, Bowman rides him out of bounds again. Bowman picks up his second caution in the period. Abounader gets his escape, his RT has been cut down to :07. Abounader drops in on a shot, Bowman locks around the body, Abounader drives through and out of bounds, no takedown. Period ends Abounader up 3-1.

3rd: Bowman starts down, after over a minute he is able to catch a leg, but it gets stalemated. Abounader finishes the period rideout

197: #5 Cash Wilcke (Iowa) vs #15 Kevin Beazley (Michigan)
1st: Cash in early on a leg, but unable to finish as they head off the mat. Beazley goes for an ankle, Wilcke scoots behind and picks Beazley and returns him for a takedown. Beazley gets out in :09 to end the first 2-1 Cash.

2nd: Wilcke starts down and is out in under :02. Beazley awarded a quick takedown that he is able to get an escape on. Beazley drops down and trips Wilcke up for another takedown. Wilcke gets out, we’re tied 5-5.

3rd: Beazley starts down and gets out to take the lead. Cash tries his duck under, but doesn’t get it. Ankle pick for Wilcke, Beazley on his seat holding on to Wilcke’s ankle – stalemate. Beazley able to hang on for the win.

285: #3 Sam Stoll (Iowa) vs #2 Adam Coon (Michigan)
1st: Coon able to score, Stoll took a shot, Coon able to go behind for the score with just under a minute left. Stoll able to get to his feet and gets an escape.

2nd: Coon starts down and gets an escape fairly quick into the period. Period ends with Coon up 3-1

3rd: Stoll starts down, gets up and out for an escape.

2 thoughts on “Iowa vs Michigan Play-by-Play”