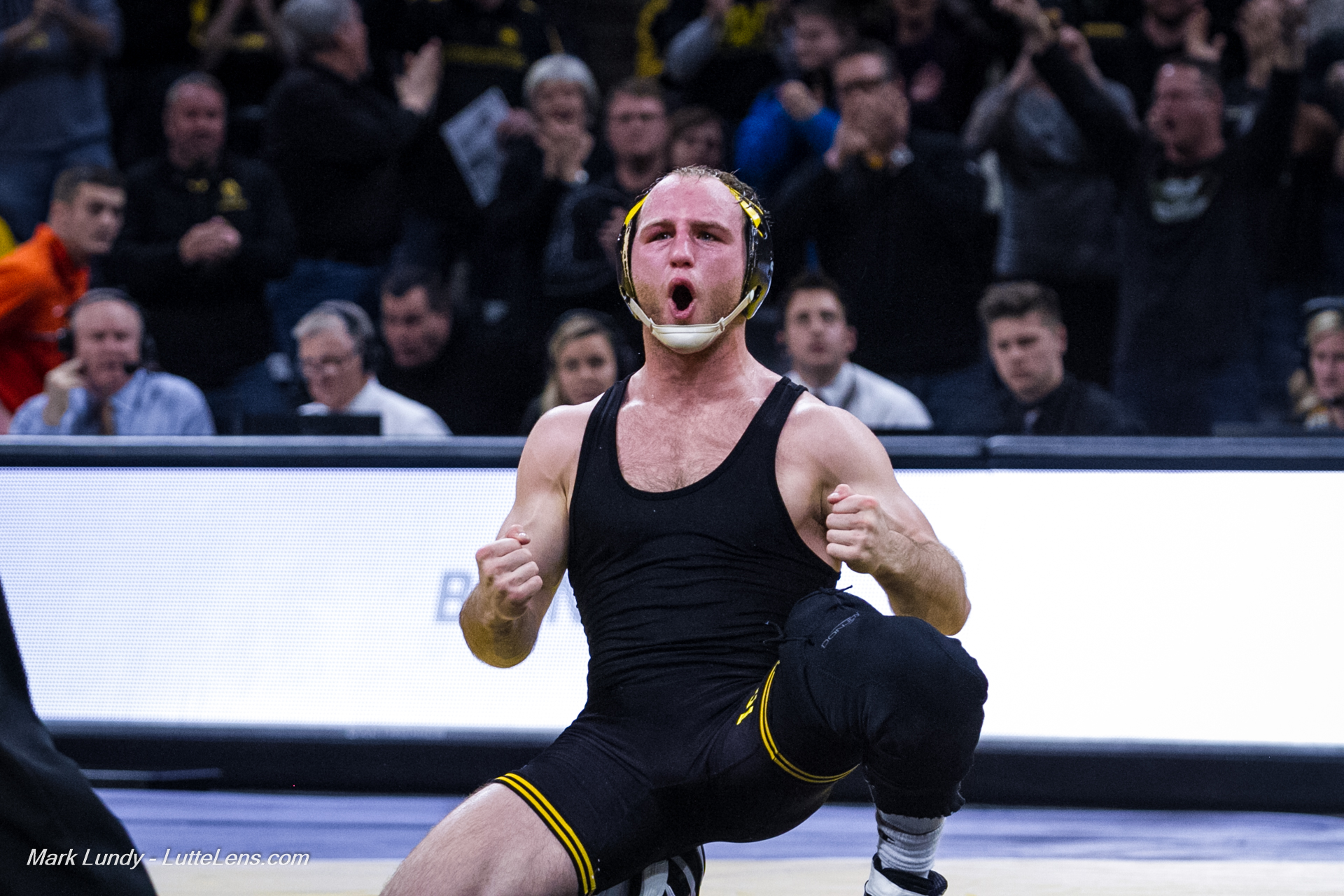 A battle of B1G titans will be going down this sunday when the #5 ranked Hawkeyes take to the road to challenge the top ranked Buckeye team in their home arena. This will be a clash of two undefeated teams, both in conference and out of conference, so somebody will be dealt their first tally in the loss column this season. On paper, the Buckeyes are favored in this matchup featuring 10 ranked wrestlers in their entire lineup compared to 6 for the Hawks.

The dual will once again kick off with fireworks featuring #9 Spencer Lee taking on #3 Nathan Tomasello. Both competitors have faced limited competition thus far this season but both are coming off impressive wins over All-Americans in the past week. Tomasello techfalled the returning NCAA finalist Lizak from Minnesota and Lee knocked off returning fourth place All-American Nick Piccinnini of Oklahoma State. This match will definitely set the stage for the B1G tournament and likely play an important factor in seeding come the NCAA tournament.

The next two matchups at 133 and 141 will favor the buckeyes on paper as the buckeyes have undefeated #2 ranked Luke Pletcher at 133 against UR Paul Glynn. Pletcher doesn’t have a very high bonus rate so though there is a large ranking disparity, bonus may not be automatic. At 141 we’ll see UR Carter Happel or UR Vince Turk facing off against #11 Joey Mckenna, a recent transfer for the buckeyes. Mckenna is coming off of a loss to Thorn and will look to get back on the right track, like Pletcher, McKenna’s bonus point rate isn’t high and the bucks should be favored for a decision victory.

At 149 pounds we’ll have another ranked matchup between two top 10 foes. #2 Brandon Sorensen will take on #6 Ke-Shawn Hayes. Sorensen should be the favorite here considering his day in and day out consistency for the hawks at 149 pounds through the years, but Hayes should be expected to wrestle a tight match in front of his home crowd.

Moving up to 157 pounds, we’ll have our third top 10 matchup, with #2 Michael Kemerer facing #7 Micah Jordan. Kemerer finished third a year ago in St. Louis and Jordan finished fourth down a weight at 149 . This will be one of the top matchups of the dual but I consider Kemerer a solid favorite here until proven otherwise.

The Bull will return to his home state for this 165-pound matchup. #8 Marinelli will take on #12 Campbell, who was the second of the Buckeyes off season transfers and finished Round of 16 a year ago in St. Louis. Marinelli will look to continue his undefeated freshman season and will be favored on paper here. Both wrestlers appear to be very impressive physically at 165 pounds and this could be a battle of wills.

Up at 174 pounds the Hawks will have another big underdog on paper with UR Joey Gunther facing off against #3 Bo Jordan. Bo Jordan has been a consistent top three guy for the Buckeyes his entire career and has a wide range of bonus capability. He could get a signature turn from top or this could be another solid dec victory for BoJo.

We could be facing a potentially interesting situation at 184 pounds. As of now it looks like the Hawks will have UR Mitch Bowman facing off against the #2 ranked guy in the country in Myles Martin. Though there have been rumors of Pat Downey potentially making his debut as a Hawkeye. Of course, he’d have to get added to the official roster and win the starting position first, but Tom Brands has been very tight lipped on this subject, as I’m sure NCAA regulations require.

Moving on to the second to last weight at 197 pounds, we have a top 5 meeting with #1 Kollin Moore vs #5 Cash Wilcke. Wilcke is looking to rebound after his first loss of the season to #3 Weigel of OSU. Last year Moore won this matchup by major decision, with how much Wilcke has improved from last season, it will be interesting to see how much Wilcke has closed the gap on Moore.

To close out the night we will have our #3 ranked heavyweight Sam Stoll going up against the Olympic gold medalist and #1 ranked Kyle Snyder. This is a clash of styles with Stoll generally dominating the upperbody control ties and Snyder having a considerable advantage with leg attacks. The Olympic champ should be the considerable favorite here, but with Stoll skillset this could very well be a decision.

If you are into computer projections, WrestleStat predicts the Buckeyes to beat the Hawkeyes 24-9.