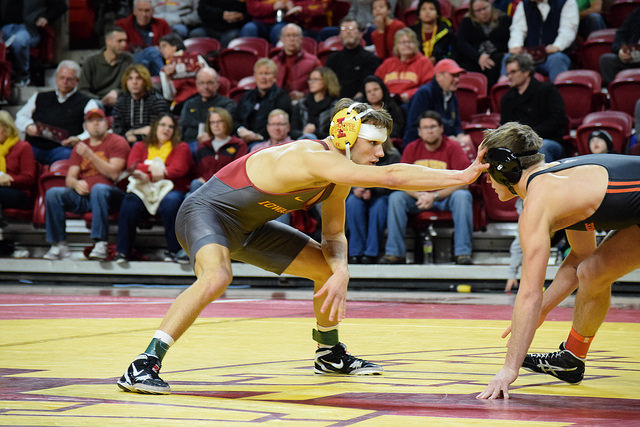 What a difference two weeks of the college wrestling season can make. The last time the Cyclones entered into a contest on their home mat they had a win-less record and had lost another 125-pound wrestler, this one to injury. Fast forward to today and the team has since won five of their last six duals including a perceived upset on paper to Virginia. Their home win agaisnt Oregon State, which kicked the current streak off, was significant for two reasons: first, it was Kevin Dresser’s first win as head coach, and second, it was the first win in Ames in nearly 23 months. This team still has it’s questions, with as many as four weights still up for grabs in terms of a solidified starter, but other portions of the lineup appear to be seemingly hitting their stride, which is a good sign as we enter the back half of the season.

On the other side of this contest we have a West Virginia team that is on a hot streak of their own, winning three of their last four duals. Their last time on the mat the Mountaineers managed to pick up their second conference dual win by upsetting North Dakota State who were ranked #25 in the country. After taking last week off from competition West Virginia will face a rather difficult weekend travel-wise having to go to Stillwater, Oklahoma to take on Oklahoma State on Friday night, and then head north to Ames on Sunday for this dual.

One of the star’s of last weekend’s performance at the Virginia duals was without a doubt freshman 149-pound wrestler Jarrett Degen. In his three matches Degen accounted for 13 dual team points, winning by fall, major decision, and decision. His second victory (the major decision) came over the then #15 ranked Josh Maruca, so it is to little surprise that we see Degen back in this week’s set of rankings at #19. His likely opponent will be Kyler Rea, a wrestler Degen defeated by a score of 6-5 last January.

The other Cyclone standout is the man that wrestles before Degen, fellow freshman Kanen Storr who went 4-0 in Virginia and racking up 18 dual team points. The Storr-Degen duo have combined to be the most consistent presence in Iowa State’s lineup to this point in the season.

Four other wrestlers appear to have a strong hold on their spots in the lineup including sophomore Chase Straw at 157 pounds. Splitting his matches 2-2 in Virginia, one of Straw’s wins played an instrumental role in the team’s victory over Virginia where he won by technical fall over Fred Green. Other weights with established starters include senior Dane Pestano at 184, who defeated West Virginia’s Brenden McRill 7-5 SV at the Lindenwood Open in November. Junior heavyweight Marcus Harrington continues to fend off freshman Gannon Gremmel for his starting spot and was 2-1 this past weekend. Lastly, freshman Sinjin Briggs continues to step up at 125 pounds as he is the only healthy man on the roster at the weight until February.

We are left four weights that are seemingly still up for grabs, starting at 133 pounds where sophomore Markus Simmons has made a push to take over the spot from freshman Ian Parker. Coming into this weekend there doesn’t appear to have been much ground made by either wrestler at the Virginia Duals. Simmons was 1-1 in his two starts and his only loss came to All-American Jack Mueller (Virginia). Parker was 2-0 with his wins coming over solid opponents Ali Naser (Arizona State) and Caleb Richardson (Old Dominion). Prior to the Virginia Duals Simmons received both starts against Northern Colorado and Oregon State, which leads one to wonder if he holds the current edge. On the flip side of the argument Simmons lost to West Virginia’s Matthew Schmitt 9-2 earlier this season, and Parker won 4-3 at the same tournament. With head-to-head on Parker’s side, don’t be surprised if he gets the start on Sunday.

Moving up to 165 pounds Dresser is looking for one of Logan Breitenbach and Skyler St. John to step up and win the spot. Only Breitenbach managed to come away with a victory last weekend in the duo’s combined four starts, with Breitenbach’s loss coming to ranked foe Anthony Valencia (Arizona State). Because of that expect Breitenbach to get the nod this weekend, and if he manages to produce a win over Nick Kiussis this could be his spot going forward.

In a similar situation at 174 pounds is sophomore Hank Swalla and junior Danny Bush, who also combined for a 1-3 record this weekend. This looked to be Bush’s spot after a runner-up finish at the UNI Open and then back-to-back starts versus Northern Colorado and Oregon State, but he failed to assert himself at the Virginia Duals. Bush likely still has the edge, so he’s the favorite to be opposite of Parker Van Egidy on Sunday.

We end with 197 pounds where for the first time this season we saw Dresser turn to sophomore Joe Teague at this weight as opposed to freshman Sammy Colbray. Unsurprisingly both wrestlers went 1-1 which, if you are following the last couple weights, is a bit of a common theme at the moment. Both of Teague’s starts came right right away, with Colbray starting the last two duals. Only Dresser knows whether this weight is truly up for grabs or Dresser was using Teague to light a fire under Colbray. With the # … Jake Smith looming in this matchup don’t be the least bit surprised to see Teague take the mat, but then have Colbray get the next start against Oklahoma.