Iowa State Will Take on #17 Lock Haven at Virginia Duals 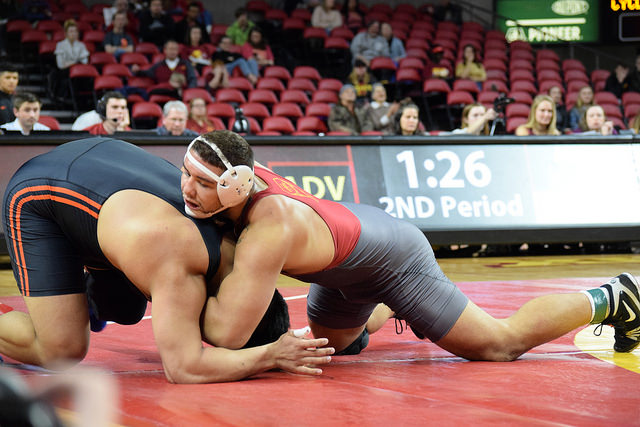 After recording their third dual win on the season Iowa State will contend for the championship spot in the Silver bracket at the 2018 Virginia Duals. The Cyclones opened yesterday’s action with a 21-18 defeat of Virginia, followed by a n Arizona State defeat in the James River Pool to qualify for the Silver bracket. In their third dual of the day the Cyclones took seven of ten matches from Old Dominion to setup a showdown with #17 Lock Haven for the fifth place finish in the tournament.

Head coach Kevin Dresser brought 16 wrestlers with him to Virginia and so far we have seen him use 14 through the first three duals. The most consistent production from the lineup has come from 141 and 149 pounds where freshmen Kanen Storr and Jarrett Degen combined to go 6-0 and they will now look to close their tournaments out on a strong note. Right now the only ranked Cyclone is Storr, who checks in at #11, but it won’t be long before Degen joins him in the ranks. Yesterday, Degen won by major decision over #15 Josh Maruca (Arizona State) and with wins over #19 Sam Turner (Wyoming) and #20 Davion Jeffries (Oklahoma) it almost looks open and closed case.

On the other side of this matchup Lock Haven comes in with two ranked wrestlers #10 Chance Marsteller (165) and #13 Thomas Haines (285), both of which were former top recruits coming out of high school. Dresser went to junior Logan Breitenbach in both of the Cyclones perceived “tougher” matchups yesterday so we will look to see if he gets the call once again. At heavyweight Marcus Harrington finished the day 2-1, with his sole loss coming to the #4 ranked Tanner Hall (Arizona State).

To win this dual Iowa State will need their continued production from the lightweights. Both Storr and Degen will be favorites in their matchups, but Iowa State will also need wins at 133 and 157 pounds to contest Lock Haven. Yesterday we saw Markus Simmons receive the first two dual starts, with Ian Parker starting the final dual against Old Dominion. Overall both wrestlers should have a shot in their matchup agaisnt DJ Kehlman, and Simmons has been the guy most recently starting four of the last five duals overall. Sophomore Chase Straw has been wrestling really well of late winning four of his last six dual starts.

The Cyclones capped off the day with a victory over Old Dominion. Iowa State topped the Monarchs 25-12 behind seven individual victories.

For the second straight dual, the Cardinal and Gold received victories at 133-149 pounds.

Parker won his second contest of the day with a 5-1 decision over Caleb Richardson. Parker scored a takedown and rode for 1:28 in the match.

Storr and Degen each posted a perfect 3-0 record on Friday. Storr ended the day with a win by medical forfeit against Alex Madrigal. Degen tallied four takedowns to defeat ODU’s Kenan Carter, 9-2.

Logan Breitenbach earned his first dual victory of the season when he knocked off Luke Drugac by 7-2 decision. Breitenbach was solid on the attack, scoring two takedowns and turning Drugac for a two-point near fall.

It took seven minutes a few extra ticks to find a winner at 184 pounds. Dane Pestano and Antonio Agee were tied 4-4 after regulation. 14 seconds into the overtime period, Pestano found the attack he needed to win the match, 6-4.

Sam Colbray made his first appearance of the Virginia Duals against Old Dominion. His offense was great in his first match of the day, as he totaled seven takedowns in a 17-6 major decision over Noah Bushman. He also picked up 2:16 of riding time.

Marcus Harrington put the exclamation point on the Iowa State victory. He was tied 1-1 late with Ali Wahab in the third period. Harrington connected on a late shot that sent Wahab feet-to-back for six points. Harrington went on to win the match, 7-2.