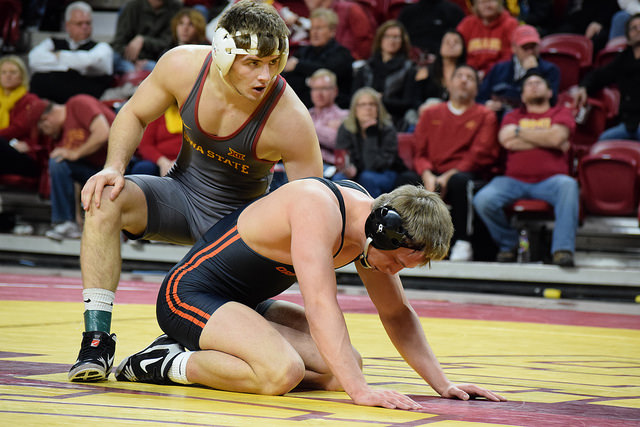 The Mountaineers got out to an early lead at 125 pounds following a bonus victory from All-American Zeke Moisey over Cyclone freshman Sinjn Briggs. Moisey racked up 14 first period points and was able to get the match terminating points shortly into the second period to put WVU up 5-0 early.

Getting the nod at 133 pounds was freshman Ian Parker. After a scoreless first two periods, Schmitt got on the board first with an escape and Parker managed to pick up a takedown. With riding time in Schmitt’s favor the dual headed to sudden victory, where Schmitt managed to score the match terminating takedown to put West Virginia up 8-0 after two matches.

Picking up the second WVU upset was Christian Monserrat who needed sudden victory to top freshman Kanen Storr at 141 pounds, 9-7.

Iowa State got themselves on the board following a 17-5 major decision from freshman Jarrett Degen. The Cyclones almost made it two straight bonus wins with Chase Straw’s 13-6 decision at 157 pounds over Zachary Moore.

The Mountaineers responded after the break at 165 pounds where Nick Kiussis pinned junior Logan Breitenbach in the first period, 1:30.

Getting the call at 174 pounds was junior Danny Bush who gave the Cyclones a fall of their own, pinning Parker Van Egidy in 1:07.

The win by Bush kicked off a four match winning streak for Iowa State as senior Dane Pestano kept the train rolling with a 9-4 decision over Brenden McRill at 184 pounds.

Earning an upset for the Cyclones was freshman Sammy Colbray, who downed the #15 Jake Smith in sudden victory, 6-5 to put Iowa State up heading into the final match.

With the dual on the line, junior Marcus Harrington laid the hammer, picking up Iowa State’s second fall of the dual in 1:05 to close things out.