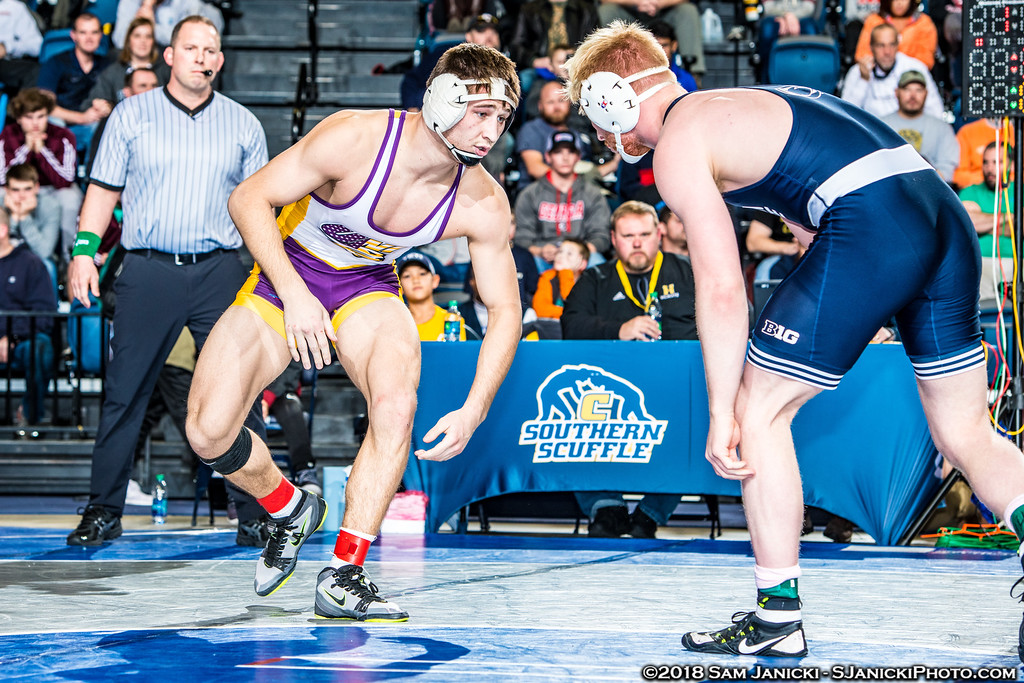 The Panthers cruised on Friday afternoon, going 2-0 in their dual competition and winning 16 of their 20 matches on the day. Things will get significantly tougher tomorrow in the championship bracket as they take on #10 Arizona State. ASU defeated Virginia 35-3 but had a tougher time with Iowa State, though ultimately winning 25-13.

There will be a couple of matches between ranked wrestlers, and the feature match will be at 174 pounds as #7 Taylor Lujan will get another shot at the #1 ranked wrestler in the land Zahid Valencia. These two faced off at the Cliff Keen Las Vegas Invitational last month, with Valencia coming out on top 9-6.

Lujan has showed he can hang with the best at 174 pounds but hasn’t been able to get a win over many ranked above him this season. The Panther had a setback at the Southern Scuffle against Jordan Kutler from Lehigh (current #5), and a similar loss to Myles Amine (current #6) at the CKLV Invite has shown us that Lujan can’t always get into those crazy scramble situations with those top ranked guys. Lujan did have the first takedown against Valencia in their first match, and if he can keep Valencia from finishing shots he should be right in this match.

We’re not entirely sure who we’ll see at 125, but if it is Ryan Millhof we’ll have a top 20 battle on our hands. Millhof is currently ranked 17th by Intermat and will face off against UNI’s pinning machine Jay Schwarm. #12 Schwarm had two wins by pinfall today, spending less than 1:30 actually wrestling. These two met also met at the Cliff Keen Invitational with Schwarm coming all the way back from a 6-0 deficit to win 8-6 with just 15 seconds left in the match.

149 will be interesting as well with both #16 Josh Maruca and former NCAA Champion Jason Tsirtis at the weight for the Sun Devils. Both men wrestled today with Iowa State’s Jarrett Degen upsetting Maruca and Tsirtis winning by pinfall over Virginia’s Jake Keating, but that doesn’t necessarily mean that Tsirtis will wrestle tomorrow. Max Thomsen has a close win over Maruca (10-9) at the CKLV and has a loss to Tsirtis, though that was back in 2015. Either way it looks to be a close match and one of the most exciting of the day.

133 pounds seems like the most likely place an upset might come. Whether it’s from Jack Wagner, who went 1-1 today, or Rudy Yates, 133 pounds is an unexpected hole in the lineup that the Panthers need to fill. If either could score the upset it could solidify their spot for the rest of the season.

Whether or not UNI wins this dual they will wrestle tomorrow night either against Oklahoma or Virginia Tech at 7:30. If they win it will be for the Championship, and if they lose it will be for third place.

We’ll have updates throughout the day tomorrow so be sure to check back here and follow our Twitter @IAwrestle and me @Nic_Ryder.