Coleman Wants to Make an Impact at Iowa State 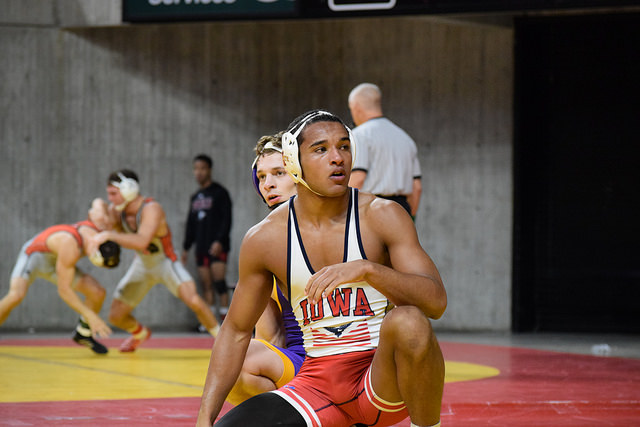 The Iowa State Cyclones have had a rocky start to their 2017-18 season, but most fans were aware coming in Kevin Dresser was not going to be able to build a national contender overnight. With a 1-4 start to their dual season, the Cyclones have taken their fair share of lumps, but amidst the lows there are several highs mixed in as the future of the program packs plenty of potential.

One of those wrestlers with a promising wrestlers is 174-pound true freshman Marcus Coleman, who is off to a 19-2 start to his career. A three-time Iowa high school state champion, Coleman was the top Iowa prep in his grade, and was rated #76 overall in the country when he signed with Iowa State.

“He’s a competitor and he’s athletic.” Dresser told IAwrestle, “That’s a good combination. He doesn’t like to lose. He’s not great at wrestling yet. He’s pretty raw, but he’s got great athletic ability and I think he’s got a tremendous upside.”

That kind of talent is just the type of thing Dresser will need to rebuild his program, but as we all know the learning curve and making the jump to the next level always has its challenges.

When some wrestlers come into the Division I level they usually take their bumps and bruises, particularly in their first season when they are going from being the king of the mat in high school to a level where those accolades just don’t matter. Resume intimidation is a bit more difficult when the wrestler standing across from you also won several high school titles in his state.

But then there are wrestlers like Coleman who manage to hit the ground running. In just over two months time Coleman has already competed in five Open tournaments and has brought home individual titles at three of those events; the other two saw him place third and second. His coach attributes that success to his wrestler’s improvement in composure.

“I think he’s composed a little bit better.” Dresser said, “When you’re a freshman and come into a college room you are going to take some lumps. Kind of early on when I saw things weren’t going his way he got a little frustrated and lost his composure a little bit. Usually when you do that you don’t wrestle better, you wrestle worse. I see him being a bit more composed. I kind of like the fact he hates losing even in the room. I need more of that. It would be nice if everybody had his demeanor there.”

Coleman’s first taste of standing on top of the podium in college came back in November where he won the Lindenwood Open in Missouri.

“It felt good to finally achieve winning my first college tournament. The Lindenwood Open was a good experience because I got a lot of matches in and I came away with things I need to improve on in my wrestling.”

Throughout his freshman season Coleman has seen his tournament finishes take an upward trajectory starting with his third place finish at the Harold Nichols Open to begin the season, followed by a runner-up performance at the Grand View open, and his three titles coming at Lindenwood, UNI, and most recently the Flash Flanagan Open.

“I definitely feel like I’m making improvements every week.” Coleman said on his current trend of tournament finishes, “I hope to keep my momentum going and finish out my last few opens on top.”

All of this is not to say Coleman has been perfect this season. While his season is considered to be a successful one so far, he does have two blemishes on his record – both coming from Northern Iowa’s Taylor Lujan.

As a mark of a true competitor Coleman knows he has a ways to improve if he wants to be the guy starting for the Cyclones in Hilton Coliseum on a regular basis.

“Mainly I think I need to focus on wrestling consistently and confident no matter who the opponent is so when it is my time to wrestle in Hilton I can put on a show for our fans, and really have fun doing it. I want to showcase my abilities and accomplish my goals of being a wrestler who left in impact on the Iowa State wrestling program.”

And for Coleman the opportunity to wrestle in front of the Cyclone crowd in Hilton is something he has dreamed about for a long time. Coleman grew up wrestling a mere six minute drive from Hilton Coliseum, racking up countless high school accolades at Ames High School. Being a local product gives Coleman a strong appreciation for his current program and with the opportunity to be a part of the rebuilding of that legacy is a role Coleman is eager to take on.

“Rebuilding Iowa State wrestling is very important to me because I’ve grown up watching the program closely and I always knew growing up that I wanted to wrestle for Iowa State. Now that I’m here I have a chance to play a role in changing the culture and rebuilding this program which is an awesome feeling. Growing up in Ames also means I have a lot of people in the community watching me closely and its important to me to make them proud.”

When he committed to Iowa State before the start of his senior year, Coleman thought he would be wrestling under Olympic gold medalist Kevin Jackson, but with results not matching fan expectations Jackson stepped down mid-season which allowed the university to lure Kevin Dresser away Virginia Tech almost 11 months ago.

Despite the change in leadership Coleman remain committed to his hometown program and even though his time in the practice room has been limited, Coleman commented that he has already seen changes in how his teammates go about practice.

“The atmosphere in the wrestling room has changed from my first practices at Iowa State. I feel like people on the team are giving more effort and starting to push themselves to new limits from when we first started. We still have a lot of growing to do and the atmosphere in the room could look totally different in the next few months.”

To date Dresser has coached his team in five duals and used four different starters at 174 pounds, none of them named Marcus Coleman. It’s been an interesting debate as it looks as though the current lineup would benefit from having Coleman starting, with four close dual losses and the current quad of 174’s 1-4 in duals, a Coleman win in any of those duals could have gone a long way in providing the necessary win to propel the team to a victory.

“There are kids that are ready to go right away. Could he win a lot of matches in college right now? Yes, but he can win a lot more next year at this time.”

Dresser has maintained a strong position on keeping that redshirt on Coleman as a benefit to his wrestler and team’s future, something that his athlete echoed in our interview.

“As of right now, the plan is to keep my as a redshirt.” Coleman said, “I’m confident that my coaches know what’s best for me and are setting me up to have the best career possible.”

For now Coleman is focused on getting better and looking forward to competing in a couple more opens this season. This summer he plans to make a run at making USA Wrestling’s Junior World freestyle team. He is also making the most of his redshirt year by learning lessons that will set him up to be successful in his future when he is finally able to take the mat as the starter.

“It was great experience getting to finally wrestle in Hilton instead of watching.” Coleman said of competing on his home mat at the Harold Nichols Open, “I was a little nervous wrestling in my first college tournament and I didn’t get the result I was hoping for but I’m looking forward to competing at Hilton the next few years.”