Allison Out 4-6 Weeks for Cyclones 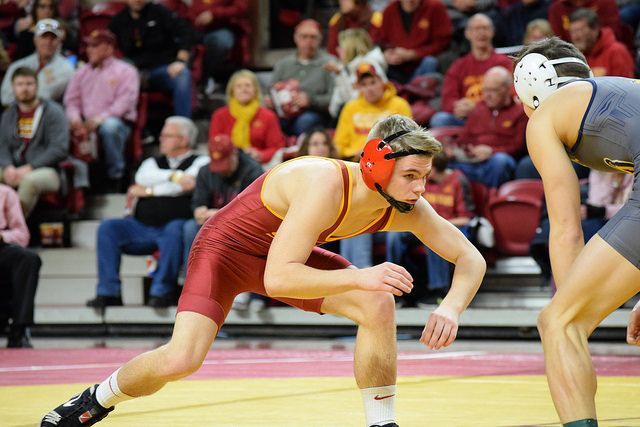 Iowa State’s depth at 125 pounds took another hit this past weekend as sophomore Jakob Allison is expected to miss 4-6 weeks with a broken hand. Allison is currently 5-7 on the season and has been the team’s starter since the departure of Jon Marmolejo last month.

“We’ve got a backup, backup, backup in there named Sinjn Briggs.” Dresser told IAwrestle on the future of 125 pounds for his team. Briggs is a two-time Iowa high school state qualifier from Gilbert high school. Briggs made his team debut this past weekend at the Pat Flash Flanagan Open in Dubuque where he posted a 1-2 record.

This is fourth change in the lineup at 125 pounds since this offseason for Iowa State. Many believed freshman Danny Vega would man the spot in the preseason, but the Arizona native left the team before official competition began. Allsion became the sole guy on the roster at 125 after Marmolejo left, and now with his injury he may not return until as late as the team’s regular season finale against Iowa on February 18th.

“We have no idea.” Dresser said on how Briggs made his way to the team, “We found him at Kwik Trip and he had a wrestling t-shirt on.”

The head Cyclone then admitted to having a little fun, and stated that Briggs decided to join the team to throw his hat in the ring to be the starter.

“He came in five to six weeks ago and through the grapevine had heard we only had one guy and there was an intramural guy that was starting for us. He reached out to me by email and I said yeah, come on in. We only had one guy at that time. We got him on the roster about a month ago and here he is big timing it.”

4 thoughts on “Allison Out 4-6 Weeks for Cyclones”