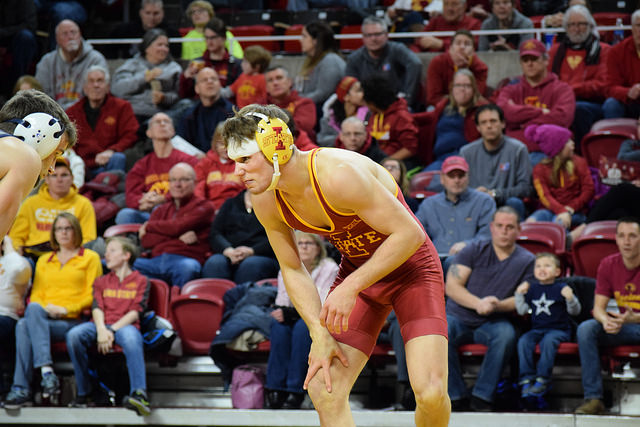 After experiencing a late dual collapse on Friday night the Cyclones return to their home mat to face the Oregon State Beavers tomorrow at 2:00 PM. Iowa State opened their conference dual against Northern Colorado on a strong note, winning three of the first five matches including a 21-6 technical fall victory from freshman Jarrett Degen at 149 pounds. Sophomore Chase Straw kept the momentum in Iowa State’s favor to start the second half before Northern Colorado was able to string together three wins, including two falls, to put the dual out of reach.

The Beavers are led by Iowa native Jim Zalesky who is entering his 12th season as head coach of the program. After a strong 2-0 start to the season, Oregon State has dropped back-to-back duals including last night’s loss to South Dakota State, 30-13. Coming into the dual Oregon State features three ranked wrestlers – #15 Ronnie Bresser (125), #13 Corey Griego (197), and #6 Amarveer Dhesi (285). These rankings are from prior to the Midlands results which is why Bresser, who was the runner-up at his weight class, is much lower than one might expect.

On the Cyclone side of this dual Kanen Storr is the only Cyclone still ranked by Flowerstling, #11 at 141 pounds. Earlier in the season the Cyclones looked to have a strong core in the making as Ian Parker, Storr, and Degen were all featured in the top 20, but Parker and Degen have since fallen out. It also appears that Dresser is still trying to find the right starter for several weights in his lineup with sophomore Markus Simmons getting the nod over Parker against Northern Colorado and junior Danny Bush became the fourth wrestler to appear in the lineup at 174 pounds this season.

The match circled in this dual is at 141 pounds between Storr and Oregon State senior Jack Hathaway. While unranked, Hathaway has been a solid four-year starter for Zalesky reaching the NCAA championships on two occasions and last year he managed to go 2-2 with two pins in St. Louis. This is definitely not a matchup to overlook despite Storr’s opponent being unranked. There will also be a homecoming element for the Beaver wrestler. A product of Iowa City West, Iowa Hathaway will be wrestling in his home state for the first time in his college career.

If you are into computer projections, Wrestle Stat has the dual going to Oregon State, 21-14. In order for Dresser to earn his first dual win as Cyclone head coach he will need a couple of very realistic outcomes to go his way to flip the script on that projection. Right now the computer predicts victories for both Hathaway and Seth McLeod over Dane Pestano at 184 pounds, both winnable matches for Iowa State. The computer also predicts major decision victories for Griego and Dhesi. If the Cyclones can flip the toss up matches or a combination of either match and holding Oregon State bonus, we could witness Dresser’s first dual win on his home mat.

One thought on “Iowa State Taking on Oregon State Sunday”