Panthers get mauled by the Big Red 30-10 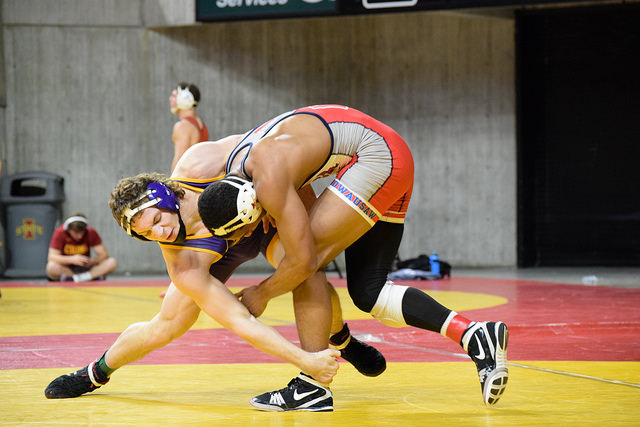 The Panthers started out their weekend in Ithaca, New York Friday night in a dual meet against the Cornell Big Red. UNI did not bring their best wrestling to the Empire State as they fell 27-10, dropping 7 of the 10 matches, three by pinfall.

First the good news: UNI’s Taylor Lujan scored an upset win over Brandon Womack. Womack was ranked 7th in the country, while Lujan was 9th. The match featured some great scrambles, but Lujan trailed 1-0 going to the third period. He scrambled his way on top though, finishing two takedowns in the third period to win 5-3 over Womack.

Max Thomsen got things started for the Panthers, scoring the first win for UNI and their only win by bonus points. Thomsen had a workman-like 10-1 major decision, forcing Cornell’s Jonathan Furnas into a few stall calls while riding. Although there weren’t a lot of points put up early, Thomsen really wore Furnas down in the first period with heavy hands.

Paden Moore also had a nice win, 8-2 over Joey Galasso. Moore looked like how we expected him to last year, taking smart shots and really fighting off some solid attempts by Galasso. He looked to be 100% healthy, and didn’t suffer any setbacks in his first dual match of the season. Hopefully Moore can continue on a healthy path, as I feel he has a strong upside at 157 pounds.

Things got off to a rocky start when Chaz Tucker pinned UNI’s 133 (presumed) backup in Jack Wagner in the second period. Josh Alber would fall 5-2 to Cornell’s Yianni Diakohimalis in his first try at 141 pounds in a dual. Alber couldn’t connect on any of his shot attempts, and where Furnas wore down during his match with Thomsen, Diakohimalis did not when pressed against Alber’s heavy hands.

Drew Foster was upset by #17 Max Dean, the younger brother of Cornell’s new assistant Gabe Dean. Foster scored the first takedown, but Dean used a great ride in the second and third periods to lead by as much as five. Foster would use two late takedowns to close the gap, but it wasn’t enough. That’s the second match this season where Foster has been ridden out, and you can bet that the coaches will be working with him on getting up.

Dan Kelly at 165 and Izaak Shedenhelm at 197 both lost by pinfall. There was some controversy during Kelly’s match, when the official appeared to call the fall after the buzzer had sounded in the second period.

Schwab protested, but there was no video review, and the official would not have allowed the challenge anyway, because by rule fall’s are not reviewable. Schwab appealed to the bench and the official after the 174 pound match that the buzzer sounded after the clock hit 0.0 each time. Cornell turned off the buzzer and used a towel-person from then on, so it would seem that the call during Kelly’s match was incorrect.

UNI’s early season doesn’t get any easier, with North Dakota State coming to the West Gym on Sunday. The Panthers have a tough travel schedule this early in the dual season and they’ll have to regroup and find themselves quickly if they want to come out the weekend at .500. The NDSU-UNI dual will start at 2:30 on Sunday.