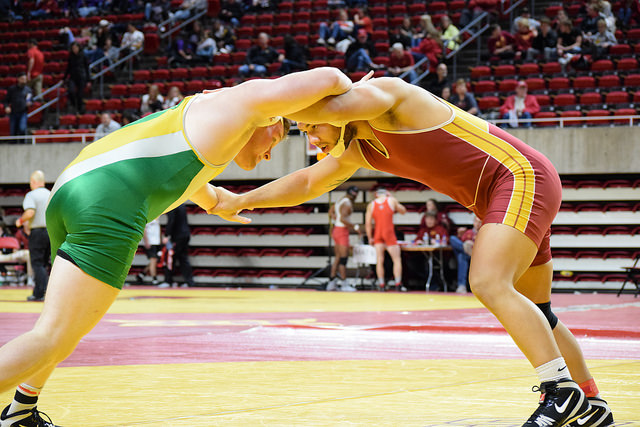 The first competition of the Kevin Dresser era is now in the books with his team walking away from yesterday’s Harold Nichols Open with five tournament titles. Despite the fact that several key starters did not compete at the open, Saturday’s competition did potentially shed some light as to who will be called upon as starters when the Cyclones open their dual schedule at home next weekend vs Drexel.

One key lineup battle came at 133 pounds where redshirt freshman Ian Parker came out on top of a tough bracket, while his teammate, sophomore Markus Simmons finished fifth. While the two didn’t square off at any time during the tournament they did share one common opponent which was Northern Iowa’s Jack Wagner. In the semifinals Parker downed Wagner by a score of 4-0, while Simmons lost a tight battle in sudden victory, 7-5 against Wagner. Simmons’s other loss came to Missouri true freshman Cameron Valdiviez by major decision, 12-4.

In the middle of a battle for a spot in the lineup, Simmons’s performance against Valdiviez is definitely a set back. Parker on the other hand was brilliant, and should be considered the front runner for the spot.

Next weekend’s opponent doesn’t feature a ton of star power, but Drexel does have one wrestler in particular that may be one in the making. True freshman Austin DeSanto was always considered a solid lightweight prospect in high school but after picking up wins over Spencer Lee and four-time California state champion Justin Mejia, the nation certainly took notice. Drexel reportedly decided to put DeSanto on the mat this season, and a potential Parker-DeSanto showdown next weekend has all the makinga of a terrific matchup.

At 157 pounds sophomore Chase Straw managed to win his bracket by winning just one match (his semifinals opponent medically forfeited), while last year’s starter Colston DiBlasi wound up taking third. With only one match, it’s hard to judge Straw’s performance against DiBlasi’s but they did share one common opponent, Erik Travers of Southern Illinois-Edwardsville. Straw defeated Travers 5-2 in the finals, while DiBlasi went down to  Travers 9-4.

If Straw is going to take the starting spot from DiBlasi, this weekend’s (albeit limited) result is the first step in that process.

Finally, at heavyweight it looks like junior Marcus Harrington is still the leader for this spot after taking second yesterday, though redshirt freshman Gannon Gremmel will continue to push for that spot coming in at third. While many expected this to be Harrington’s spot, it is worth noting that yesterday was the first college competition for Gremmel after missing all of his redshirt season. Both Gremmel and Harrington lost to UNI’s Carter Isley, with Gremmel going down by fall and Harrington’s lost a 3-2 match.

Drexel does feature Joey Goodhart at heavyweight, which was their only wrestler ranked in Flowrestling’s preseason top 20.

With 133, and 157, and 285 getting some more clarity after this weekend our attention turns to the other remaining lineup questions we have for this Iowa State squad. Neither Jarrett Degen or Dante Rodriguez competed at 149 pounds this weekend, which left things open for Gavin DeWitt to run away with the title. Skyler St. John was 1-2, with his win being an injury default at 165 pounds and Logan Brietebach was absent from the field. Lastly, 174 pounds from Iowa State saw true freshman Marcus Coleman coming home with the best performance taking third, while sophomore Luke Entzel went1-2 and senior Collin Strickland went 0-2.

Iowa State will get back on the mat on next Sunday, November 12th at noon against Drexel. After Drexel, Iowa State’s next scheduled competition is the Lindenwood Open in Missouri, which should help clear any remaining questions before the team gets ready for the first big event, the Cliff Keen Invitational in early December.