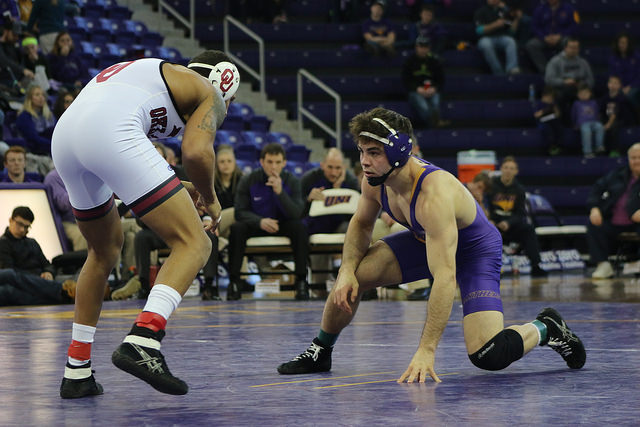 One of the biggest strengths for UNI coming into the 2017-18 season is the Panthers could feature as many as eight wrestlers in the lineup with starting experience, and that includes former top 100 recruit Paden Moore who was the starter at 157 pounds last year for UNI. With a 15-15 record as a freshman, Moore definitely took his lumps, but UNI will be hoping the Minnesota native manages to take a step forward.

Injuries have played a role in Moore’s career which could have a huge impact on the early results in his career. During his redshirt year Moore wrestled just nine matches, with all of those coming in the month of January. This past season Moore dealt with a few more injuries, having to injury default in the Northern Illinois bout, and forfeiting out of the MAC tournament to end his season.

Pushing Moore for the starting spot will be one of the newer arrivals in Cedar Falls, Logan Ryan. A former top 100 recruit himself, Ryan competed for the last three years at the University of Iowa, before transferring to UNI for his remaining two years of eligibility. Ryan was granted a full release from Iowa, which means he could have an immediate impact on the UNI lineup. After competing at 141 pounds during his first two seasons at Iowa, Ryan bulked up to 165 pounds to try and make the lineup. Ryan only competed in the first half of the season for the Hawks, putting together and 8-3 record.

As an additional fund fact: With Jay Schwarm in the driver’s seat at 125 and Jack Wagner challenging Rudy Yates at 133, Ryan is the third Bettendorf graduate looking to break into the Panther lineup.

One weight that the Panthers won’t be hurting at for depth anytime soon is at 165 pounds where two year starter Bryce Steiert returns for his junior season. After competing at 157 pounds as a freshman, Steiert made a big progression in his sophomore season where he emerged as an All-American contender. Of course some of that progression is credited to his bump to 165 after senior Cooper Moore ended his career due to injuries. With a 22-6 record last season, Steiert certainly looks comfortable and adjusted to the new weight, and he will once again be in the thick of contending for an All-American status this season. That is unless he redshirts.

The other notable fact about Steiert is he was the first and only true freshman to wrestle under Schawb, and the head Panther has certainly acknowledged that Steiert could likely benefit from another year where he could focus solely on getting better. One of the reasons Schwab may feel that was is the fact that he knows he already has depth in the room. Sophomore Isaiah Patton, along with junior Brody Beck will all be vying for the backup position.

Moving to the Big 12 will present more challenges for Steiert, but that was a given when the Panthers elected to join the conference. Had they stayed in the MAC Steiert would have likely been the favorite to win the conference crown, especially after the news that Missouri’s Daniel Lewis is reportedly moving to 174. Instead we’ll see Steiert battle with Oklahoma State’s Chandler Rogers (the Panthers will travel to Stillwater, OK for that matchup) and Oklahoma’s Yoanse Mejias for the top spot. Steiert has the resume of a guy that has a shot at the podium, and if he’s on the mat he will very much be a threat to do so.