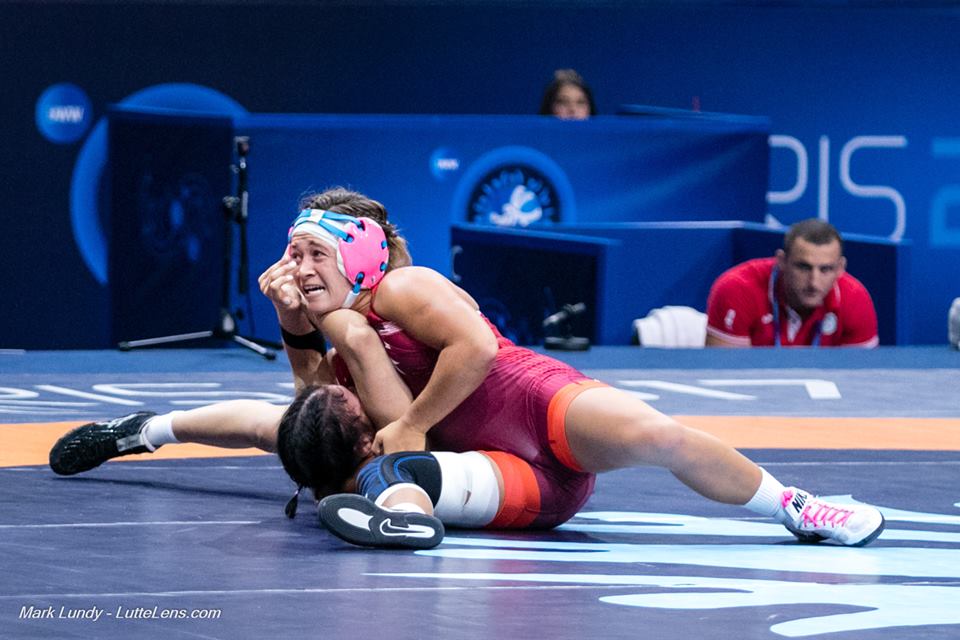 PARIS, France – 2016 World silver medalist Alli Ragan (Colorado Springs, Colo./Sunkist Kids) will get another chance to win a World title, after qualifying for the finals at 60 kg/132 lbs. at the World Championships on Thursday morning.

Ragan, the top seed, needed a big move late in her semifinal match against 2014 World bronze medalist Anastasija Grigorjeva of Latvia to advance. Trailing 3-2 in the second period after stepping out of bounds, Ragan came right back with a wicked headlock and pinned Grigorjeva in 4:43.

She will battle 2016 Olympic gold medalist Risako Kawai of Japan in the gold-medal finals. Kawai won her Olympic title at 63 kg/138.75 lbs., but has dropped down in weight this season.

Ragan is competing in her fifth World Championships, winning her silver medal in December 2016 in Budapest, Hungary.

She opened strong against two-time University World medalist Gabriella Sleisz of Hungary, earning a 10-0 technical fall. Ragan dominated on her feet, getting four takedowns and a turn for the win.

In the quarterfinals, she edged 2017 European bronze medalist Luisa Niemesch of Germany, 4-0. Ragan scored two points on shot clock violations by Niemesch, and added a second-period takedown for the margin of victory.

“I knew every match for me would be a grinder. I wrestled the first girl before, and it was a two-point match. I knew it would be a fight. That is what I prepared to do, to fight. My coaches said they are all going to be grinders and you will just have to go scrap with them. Mentally, I got myself ready, from my warmup and all the way through the matches to succeed. In my semifinals match, I was down, and she kept banging on my head. I said if she does that one more time, I am going to throw you with a headlock. She did it one more time, and I hit the headlock,” said Ragan.

Competing in her second Senior World Championships, Victoria Anthony (Tempe, Ariz./Sunkist Kids) has qualified for a bronze-medal match for the second time. She will battle Sonhyang Kim of North Korea, a 2017 Asian silver medalist and 2014 Youth Olympic Games champion for the bronze on Thursday night.

Anthony opened with a 28-second 10-0 technical fall over Korea’s Miran Cheon. An inside trip takedown was followed by four straight gut wrenches and a quick stoppage.

Anthony continued to compete well, pinning 2017 Asian silver medalist and 2014 Commonwealth Games champion Vinesh of India in 5:09. Anthony gave up two takedowns to trail 4-2, then closes the gap to 4-2 with her own slick takedown. Anthony nailed a hip toss in the second period, held Vinesh on her back for a long time, then was awarded the fall.

In the quarterfinals, Anthony dropped an 11-0 technical fall to three-time Cadet World champion Yui Susaki. Anthony trailed 3-0 at the break, then the 18-year-old Susaki scored a double leg takedown and three rapid turns to secure the technical fall. When Susaki won her quarterfinals match, she pulled Anthony back into repechage.

Anthony dominated hometown favorite Julie Sabatie of France in her repechage match. Leading 7-0 after the first period, after a four-point throw, a turn and a penalty point, Anthony tossed Sabatie to her back in the second period and was able to adjust the hold for the fall.

“I started strong. Against India, I had to come from behind. I was not wrestling my pace in the first period and that showed because I was down 4-0. In the second I got a takedown and I ended up catching her on a pancake. Against Japan in the quarters, I don’t think I wrestled with my best intensity. It is what it is. Not wrestling the way I really wanted in that match makes it easier to give everything tonight. I wrestled well against France, and I will be OK in the bronze match,” said Anthony.

In 2013, Anthony placed fifth in her previous Senior World Championships, competing up a weight class at 51 kg/112.25 lbs.

The other two U.S. wrestlers competing on Thursday won preliminary matches but lost in the quarterfinals, and were unable to compete in the repechage after their opponents were beaten in the semifinals: 2016 Olympian Haley Augello (Lockport, Ill./New York AC) at 53 kg/116.5 lbs. and 2016 Olympic Trials champion Tamyra Mensah (Katy, Texas/Titan Mercury WC) at 69 kg/152 lbs.

In the first round, Augello tore through two-time Asian medalist Thi Hang Vu of Vietnam in a 10-0 technical fall, in which Augello strung two takedowns and three turns for the win.

She won her second round bout in a tight battle with Lannuan Luo of China, 3-0. Augello scored in the first period on a stepout and a point on a shot clock violation. In the second period, Luo was again put on the shot clock and did not score, giving Augello her third point.

In the quarterfinals, Augello fell to veteran Roksana Zasina of Poland, 6-2. Zasina scored a takedown and gut wrench in the opening period to lead 4-0. In the second, she stretched the lead to 6-0 on a counter takedown. Augello got on the board with a caution and two points against Zasina on a fleeing call. Zasina closed it out with a final takedown to win 8-2. Zasina is in her ninth Senior World Championships, with a best previous finish of fifth in the 2010 Worlds.

Zasina was defeated in the semifinals by Mayu Mukaida of Japan, knocking Augello out of the tournament.

“I feel I had fun out there in my first two matches. Obviously, I am sad now. It is devastating. You work really hard and it is not what you expected. It will be hard to get over it, and I will get back out there and work hard and get stronger,” said Augello.

In her first match, Mensah controlled 2015 Junior World bronze medalist Alla Belinska of Ukraine in a 12-2 technical fall. Leading 4-2 at the break, Mensah broke it open with a takedown and two ankle laces early in the second period for a 10-2 lead. She closed out the technical fall with a spin behind takedown.

Mensah took many of the shots but was unable to finish them in a 5-2 loss to 2016 Junior World silver medalist Yue Han of China. Two of Han’s takedowns came on counters to Mensah attacks. In the semifinals, Han was winning late in the match, but past World champion Aline Focken of Germany scored a late takedown to win 5-3, knocking Mensah out of the tournament.

“I let her get to the collar tie and let her hang on there. It is something I have been working on in practice. When you get to the match, it is different. I’m kind of disappointed in myself,” said Mensah.

The finals will be held at 7:00 p.m. Paris time, which is six hours ahead of U.S. Eastern time. All of the action can be watched on Trackwrestling. For just $9.99, fans can watch the entire week of the World Championships.