Top 5 Throwdown between Shapiro and Whitman at Night of Conflict 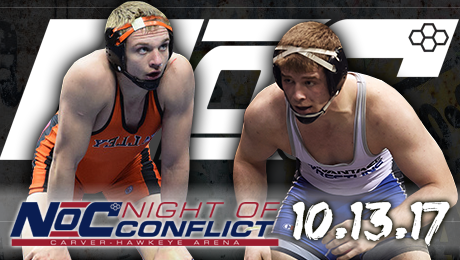 One year ago Valley-West Des Moines’ Joel Shapiro was one of Iowa’s fastest rising juniors in the state of Iowa making the podium at Fargo before going on to an undefeated regular season where he won his first state title. Fast-forward to today and Shapiro has established himself as one of the top wrestlers at his weight – No. 4 at 195 pounds – and he is currently the top verbal in Kevin Dresser’s first recruiting class at Iowa State.

Coming in from Michigan is another top five wrestler at 195 pounds, No. 3 Brandon Whitman of Michigan has also committed to wrestle at the next level at North Carolina. A three-time state champion, Whitman has also picked up multiple All-American finishes across the country in Freestyle and Greco-Roman, including reaching the finals of the Cadet World Team Trials. Whitman picked up a huge 13-2 win over Pennsylvania’s Trent Hidlay at the Junior National Duals in June. Hidlay is currently ranked No. 2 at 170lbs.

This will be Shapiro’s second and final Night of Conflict match after debuting against Illinois prep Danny Braunagel last fall. In that match Shapiro came out on top 8-4. At the time Shapiro was ranked #15 and Braunagel was ranked #17. VIP tickets are one sale now and can be purchased through EventBrite. General Admission tickets are expected to go on sale later this month. Fans unable to attend the “Night of Conflict” in person will be able to watch via live stream on Flowrestling.