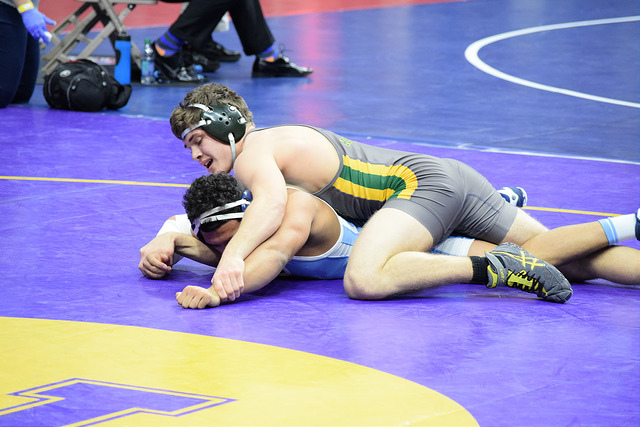 With the most recent commitment of Michael Millage to Northern Iowa, we have a new wrestler added to our top 10 uncommitted seniors list.

Cedar Rapids Kennedy’s Ben Sarasin enters his senior year a two-time state medalist and has been ranked at or near the top of his weight over the past two seasons. Last season Sarasin was considered the #2 ranked wrestler at 170 pounds (behind Ames prep Marcus Coleman) and after coming up short as a junior, Sarasin is hungry to finish his career with a state title.

” I was very upset-not only because I lost,” Sarasin said of his quarterfinals defeat to Coleman at the state tournament, “But also because I left the mat feeling that I could’ve done more..Obviously I’m very intent on finally earning a state title next year. In order to do so, I’ll be putting more effort and time into training. I am also focusing on becoming a stronger wrestler, both physically and mentally.”

In addition to winning a state title, Sarasin has several other goals set for this coming season, and like a true leader he knows not all of his goals should be individualistic.

“I also plan on going undefeated next year and setting Kennedy’s single season tech fall record. On top of these goals, I really want to become a strong leader for our team and bolster our performance in dual meets and tournaments.”

For some wrestlers the recruiting process can be a drain, but not for Sarasin. While he doesn’t have a time frame in mind on when he will make his decision, he has informed IAwrestle that he is currently considering Division I schools Iowa, Northern Iowa, the University of Chicago, the University of Pennsylvania, Brown, and Columbia and he has also shown interest in traditional Division III power, Coe College.

“My recruiting process has been a lot of fun. I’m very honored to be in contact with some incredible coaches and programs and to have toured such beautiful campuses. However, I still have a lot to figure out before I decide on a school.”