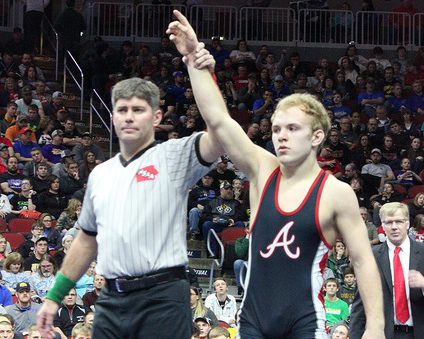 If you want to talk about wrestlers who put themselves on the map in 2017, look no further than Davenport Assumption’s Matt Robertson. Coming into last year Robertson was ranked #6 in our preseason rankings, but he finished at the top winning the 2A state title at 132 pounds. His performance also pushed the Assumption standout to #22 in our latest Fab 50 rankings, making him one of the state’s top 2018 seniors.

After his rapid rise to the top Robertson took the time to speak with IAwrestle about winning his state title and also on what’s to come.

“Winning state has been a goal of mine for a long time,” Robertson said, “(Its) something I wasn’t able to accomplish at the youth level so finally getting one was nice.”

After winning his first state title, Robertson went on to have a great postseason, wrestling a terrific match against Western Dubuque’s Bradan Birt at our War at West Gym event, and then following that up with a 10-3 performance at Disney Duals.

Of course coming with the territory of winning a state title as a junior means means that challengers looking to knock him off in the coming season. A challenge Robertson is eager to face.

“The ‘pressure’ just adds to the fire. I’m excited to be back on the mat competing and doing what I enjoy. Hopefully it makes the room more competitive having both Broderson and I returning so some of the younger guys will see what it takes to be on top of the podium at the end of the season.”

Another thing coming with the territory of winning is calls from college coaches hoping they can land the services of Robertson at their school when he takes his wrestling to the next level. For now Robertson is still listening on schools, but he also has a couple offers.

“The recruitment process is going well and I’ve drawn interest from a couple Division I schools as well as some Division III schools. Overall I’m keeping my options open for now. Maybe come season if it gets more stressful you could see a commitment but for now I don’t plan to until after season next year.”

With Robertson not planning on committing until after this coming season, he is putting all of his focus and attention on his new goals for his final high school season.

“Obviously another state title is the ultimate goal on the season along with an undefeated season. I had one blemish by one point. Also spreading the gap with my opponents and to keep scoring.”

One thought on “Overtime with Assumption’s Matt Robertson”