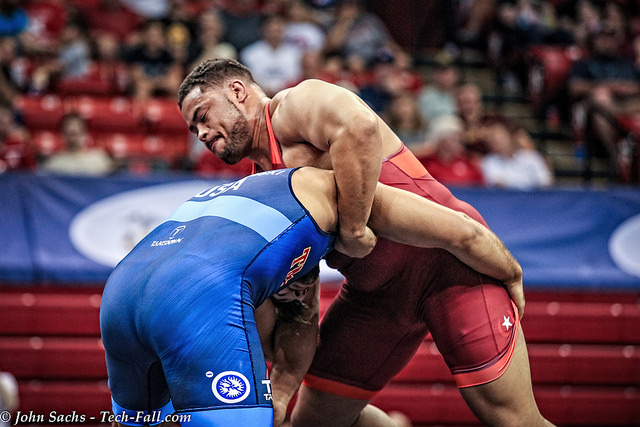 Less than a year after moving to Ames, Iowa to join the Cyclone Wrestling Club it sounds as if 2017 U.S. National Team member, Dom Bradley, will be parting ways with the Cyclones. Bradley originally joined the Iowa State affiliated senior level club a few months after the 2016 Olympic Trials, and has been a main workout partner for Kyven Gadson this past year.

“Where I am at in my career I need to think about coaching in the future,” Bradley said in a recent interview with Takedown Wrestling, “The people that have called me this week has been crazy. I had Olympic champs, World champs, big time programs calling me.”

Bradley went on to list the programs he has been in contact with and one of the more interesting options Bradley mentioned would be to join Iowa State’s instate rival program, Iowa’s Hawkeye Wrestling Club.

“Tom Brands called me, I don’t know if that’s possibility (going to Iowa), but even just going up there and training, me and Telford go at it.

“I beat a lot of tough dudes (at the Trials). Bobby Telford, he’s strong, you’re typical Iowa heavyweight, really good hand fighting. I’ve got some history with him and every single time there has been some battles.”

In addition to mentioning Telford as a potential training partner, Bradley also stated that the latest club addition of Mark Perry as coach as being another reason that Iowa is an attractive location for him to train.

“It might not work out, but maybe I can go up for a couple workouts, especially that Mark Perry is there now, that guy is a great mind in wrestling.”

Currently Bradley has been in talks with Big Ten programs Nebraska, Northwestern, and Michigan, and Big 12 programs South Dakota State and North Dakota State. Perhaps the most notable omission from Bradley’s interview was that Iowa State was not listed as a possibility, which could indicate that Bradley and the new Iowa State staff have no plans on continuing the training relationship.

Bradley was a two-time NCAA All-American for the University of Missouri and has made back-to-back U.S. National Teams at 125 kg, taking third and second respectively at the U.S. Trials.

The Bradley interview can be found on the latest episode of Takedown TV: