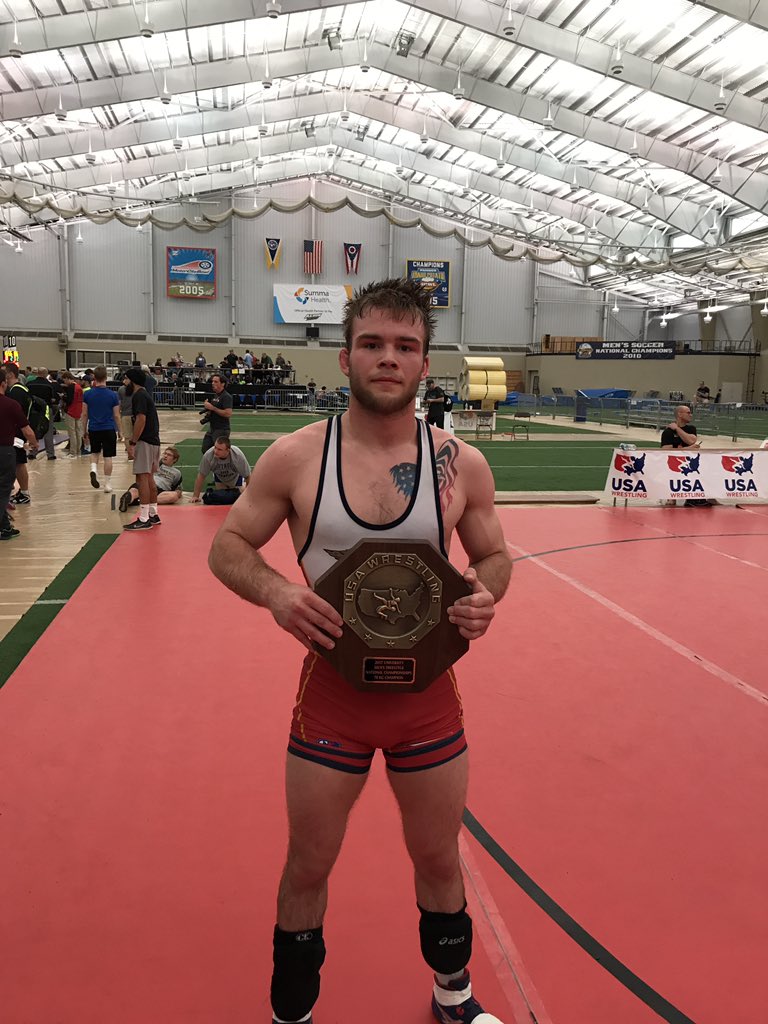 After coming up short a year ago, Brandon Sorensen will be leaving Akron, Ohio with a University National title at 70kg. A three-time NCAA All-American for the Hawkeyes, this is Sorensen’s third straight top eight finish at the University Nationals tournament. Seven other wrestlers joined Sorensen on the podium with teammate Kaleb Young taking eighth at 80kg, Coe College’s Cole Erickson taking sixth at 70k, Northern Iowa’s Max Thomsen taking fifth at 70kg and Jacob Holschlag 8th at 86kg, and Iowa State getting top five finishes from Ian Parker and Markus Simmons at 61kg, and Earl Hall at 65kg.

It was a workmanlike performance for Sorensen, winning seven matches on the weekend and only surrendering six points the entire tournament. After cruising through the early rounds, Sorensen finally met some resistance in the semifinals against Thomsen. It was a tight battle that was tied 1-1 late into the match when Sorensen struck for the only offensive points getting a takedown. In the finals Sorensen controlled the entire match, taking a 3-0 lead into the second period, where he added a pushout to win 4-0.

The story line for Iowa State this weekend was 133 pounds; both the future and the past put on big performance leading to three All-American honors. Recent graduate Earl Hall, ISU’s 133 starter this past season, came into this tournament surprisingly at 65kg after being a former champion at 61kg. Hall made it all the way to the semifinals before falling to eventual champion Robbie Mathers, but not before he downed Nebraska freshman Chad Red in the quarterfinals. Hall then came back to defeat Collin Purinton (also of Nebraska) and then eventually finishing fourth. The future, true freshman Ian Parker and redshirt freshman Markus Simmons, put in top performances as 61kg, with Simmons bringing home third, and Parker earning fifth. Both wrestlers earned big victories over Pittsburgh’s Dom Forys.

Northern Iowa’s Thomsen continues to impress by reaching the semifinals where he as noted, fell to Sorensen. After losing a tight 2-1 battle with Duke’s Mitch Finesilver in the consolation semifinals, Thomsen rebounded with a strong 10-0 win against Erickson. While normally it would be a surprise to see a Division III wrestler like Erickson finish top six at a tournament like this, it’s not a surprise to those in Iowa who saw the Mediapolis standout enterain several Division I offers before committing to Iowa. After a redshirt season, Erickson transferred to Coe, where he was an All-American this past season.

Indiana proved to be the thorn in Young’s side this weekend with Devin Skatzka defeating him 6-2 in the round of 16, and Bryce Martin winning 6-2 in Young’s official losses (he forfeited his remaining two matches). It’s a highly encouraging tournament for Young, who also earned runner-up honors at 79 kg in April at UWW junior Nationals.

A trio of wrestlers fell one match away from All-American status, Grand View’s Ryan Niven (74kg) and Jonathan Dennis (97kg) and UNI’s Tyler Hoffman (97kg) each fell short in the Bloodround.