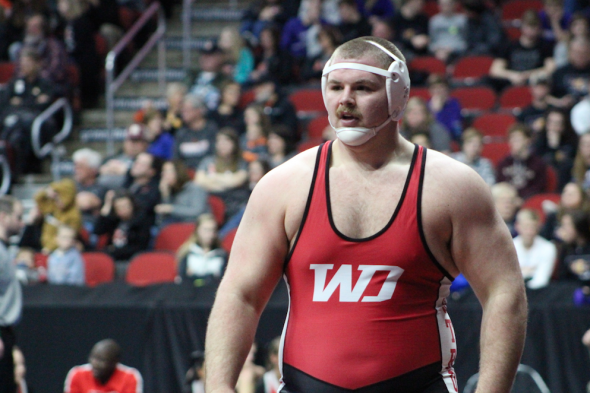 Costello brings much more to the table than the ability to grow a sweet mullet and ‘stache. Those that are quick to dismiss based on his shorter stature and penchant for flowing locks do so at their own peril as the Western Dubuque native went from solid Iowa prospect to pinning machine over the last 12 months.

Costello doesn’t have a lot of hardware as a whole, though he has been piling up the top finishes as of late. This past year he finished the season third in Iowa with 44 falls, all the while competing in Iowa’s biggest class. That’s also not to say Costello is completely without national credentials, as he was a Greco-Roman All-American last summer, and has reached the USA Wrestling Folkstyle National finals in each of the last two years.

Fitting Costello into the lineup will be an interesting question, specifically this coming season. As noted in our Jacob Warner Recruit Report, last year’s starter Steven Holloway could conceivably head back down to 197 to fill that spot in the lineup, leaving Iowa with no heavyweight until Sam Stoll recovers from his second ACL tear. Would Brands put a “green” Costello out on the mat until Stoll returns to form? It’s hard to say, but given Brands’s history of redshirts and how he normally deals with injuries I still find myself in the “No” camp at the moment.

With a redshirt Costello sets himself up to get a year of learning under his belt before competing with Stoll for the starting spot in what would be Stoll’s final year of eligibility. The learning starts soon, with Costello planning on moving to Iowa City in early June to get acclimated to the Iowa room and to give him some extra time to roll with coach Ben Berhow and HWC wrestler Bobby Telford.