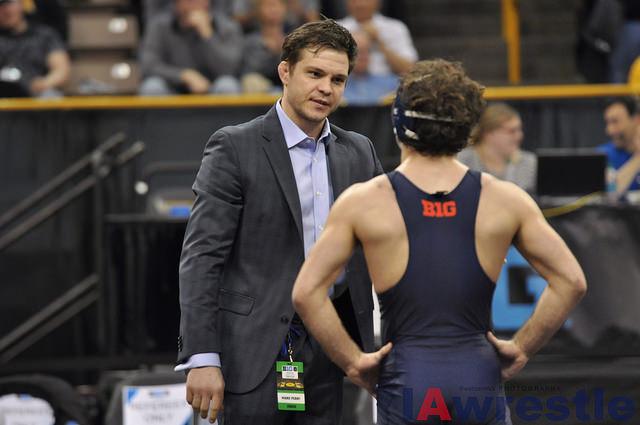 Last week IAwrestle was first to report that there were rumblings within the wrestling community that the University of Illinois Associate Head Coach Mark Perry and Iowa were in discussions to bring the former Hawkeye back into the program. Andy Hamilton of Trackwrestling is reporting that Perry is indeed headed back to Iowa and that role will be filling will be that of Iowa’s Hawkeye Wrestling Club Head Coach as our own Tony Hager speculated in our original story.

Perry is a well known commodity in the wrestling community, going back to his days as a high school wrestler when he was winning prep national titles for Blair Academy in New Jersey. As if wrestling for one of the nation’s top high school wrestling powers wasn’t enough, there was plenty of buzz surrounding Perry based on his bloodline, being the son of All-American Mark Perry Sr. and nephew to USA wrestling legend John Smith, both of which competed for Oklahoma State. Despite his family connection, Perry decided to move to the beat of his own drum, attending Iowa where he was a four-time NCAA All-American and two-time NCAA champion – the latter being achieved under Tom Brands, Iowa’s then and current head coach.

Since joining the elite of Hawkeye wrestling history Perry went on to serve as an assistant coach at Penn State, and was co-head coach at Cal Poly, before taking his former position at Illinois. It was at Cal Poly Perry discovered eventual two-time NCAA champion Jesse Delgado (who followed Perry to Illinois). Perry has continued his success recruiting California, landing two-time NCAA champion Isaiah Martinez, now a senior at Illinois, and the state second ever four-time state champion, Justin Mejia is the Illni’s top recruit in the class of 2017.

The move to Iowa reunites Perry with former coaches Tom and Terry Brands, as well as Ryan Morningstar who was a teammate of Perry’s. The position of the Hawkeye Wrestling Club is not directly connected to the University of Iowa, which means Perry’s main focus will be on the freestyle and Greco-Roman development of the wrestlers within the Club. This also means that Perry would not be able to sit in the corner for University of Iowa wrestlers during team competitions, nor will he be able to actively recruit for the University’s program.

Listen to Ross and Hager breakdown the Perry news on the latest edition of Potentially Dangerous: