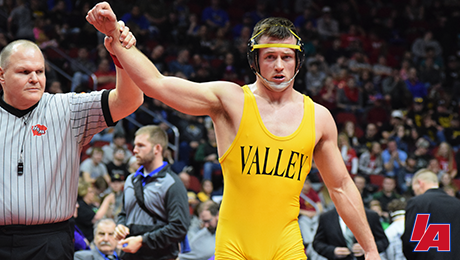 Maquoketa Valley’s Alec McDowell committed to Iowa State University where he is projected to wrestle 184 pounds. McDowell made IAwrestle’s All-State Team after running through the 1A 182-pound Iowa High School State Tournament.

“Iowa State gives me a great opportunity academically with one of the best engineering programs in the country. Add that to the opportunity to be a part of this program with some of the best coaches in the nation sold me on Iowa State.” – McDowell stated.

In November, McDowell was accepted to Iowa State, but had no plans to further his wrestling career until Kevin Dresser came to Ames. Being recruited to wrestle picked up halfway through his senior year but the looks from around the country heated up after winning the state title. Edinboro, Northern Illinois and Northern Iowa were all at the top of his list but decided on Iowa State because of his major.

The title didn’t come easy. McDowell lit up Wells Fargo Arena after defeating No. 5 Joey Schween (Belle Plaine) by fall in the quarterfinals and then went on to defeat No. 6 Bryce Oveson (Wilton) by a 3-0 decision. In the finals, McDowell faced top ranked Logan Schumacher (Martensdale-St. Marys) where he controlled the match from start to finish to win by decision 6-1.

The road to the becoming a Division I recruit came with dedication to the sport. In his first two high school seasons McDowell failed to qualify for the state tournament, but would turn things around his junior season. McDowell qualified and then made it to the semi-finals after a picking up big wins over Dante Arzani (I-35) and Oveson. After losing in the semi-finals, McDowell came back with two straight victories to pick up his first state medal.

“Not qualifying my first two years crushed me and showed me I needed to work a lot harder to reach my goals. I committed myself to training during the summer and set big goals to work for everyday.”

Fargo is the next step in McDowell’s career, training two days a week at the RTC in Ames. “I need to improve in all aspects of wrestling. I need to improve my mat wrestling. Getting out from bottom and getting turns on top is huge in college wrestling with riding time.”

Listen to Hager and Ross discuss McDowell’s rise from state champ to Division I prospect on Potentially Dangerous:

I am extremely blessed and thankful to commit to Iowa State University to continue my wrestling and academic careers #CyclONEnation pic.twitter.com/8JQghfHd4B