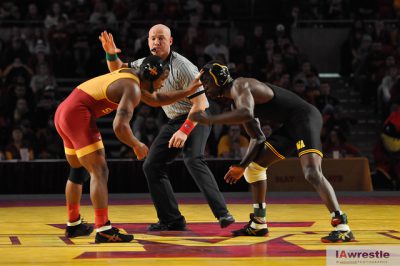 Former Fargo national champion Renaldo Rodriguez-Spencer officially left Iowa State last semester. Left the program and left the school and it wasn’t clear where he wanted to go until now. Renaldo has commited to wrestle for Nick Mitchell and the Grand View Vikings. Renaldo will have two years left of eligibilty and is projected to wrestle 157 pounds.

Rodriguez-Spencer, or more commonly referred to as “Nardo” traded starts during the 2015-16 at 157 pounds for the Cyclones, compiling a 16-11 record before losing his starting spot to Logan Breitenbach for the postseason. Nardo began the 2016-17 season as Iowa State’s starter going 0-3 in duals and had a total record of 3-5. A top 50 recruit in the class of 2014, Nardo was a Greco-Roman national champion and freestyle All-American at Fargo before landing at Iowa State.