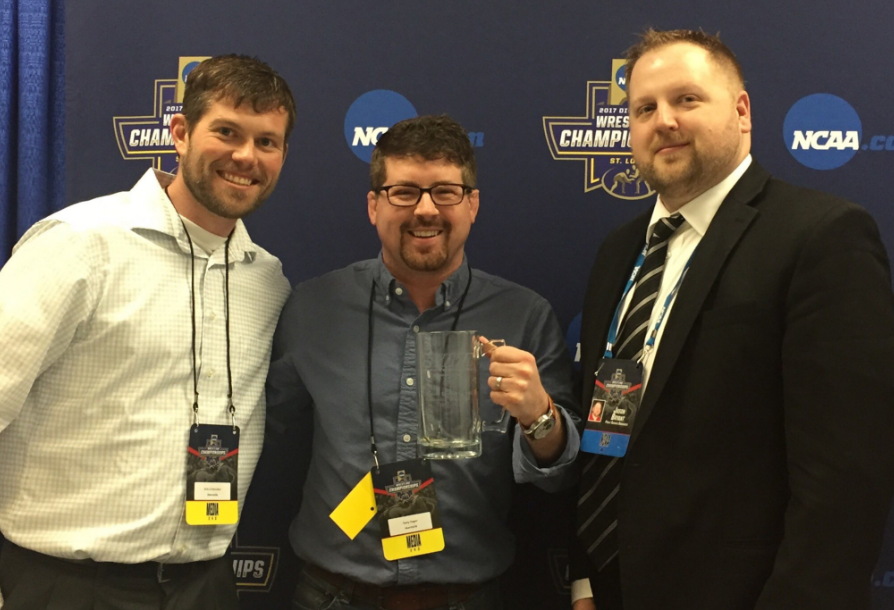 The NWMA, founded in 1989, is an organization that represents the best interests of journalists within the sport of wrestling. This includes reporters, editors, publishers, webmasters, photographers, broadcasters, sports information directors and other media professionals who share an interest and involvement in the sport.

“With the growth of new media and the sport’s presence on the internet, the opportunity for diverse and dynamic coverage has improved over the years,” said NWMA President Jason Bryant. “It’s allowed the organization to recognize groups and individuals who have added significant value to the wrestling landscape in a variety of formats.”

Founded by Tony Hager and Kirk Crittenden as another outlet for fans in Iowa to consume wrestling content, IAwrestle.com has grown into a bona fide media outlet providing coverage of Iowa’s three major Division I programs, its small college programs as well as extensive coverage and commentary about the state’s rabid high school wrestling scene. Live updates, video interviews and the Potentially Dangerous podcast are key draws to the site that also has a growing network of contributors. The site has also created several quality wrestling events and showcased them in some of Iowa’s most iconic wrestling facilities.

Knapp anchored broadcasts for NBC Sports for the 2016 U.S. Olympic Wrestling Team Trials as well as NBC’s presentation of the Olympic Games in Rio de Janeiro in August of 2016. Knapp, who is also a key broadcaster with the Pac-12 Network’s wrestling coverage, has been a regular voice on television for wrestling since the days of CSTV. Rio was Knapp’s second Olympics as the lead wrestling broadcaster.

A consummate professional, Levins has been a consistent voice for Iowa high school and college wrestling for a number of years. In addition to his day-to-day responsibilities with the Burlington (Iowa) Hawk Eye newspaper as a sports reporter, Levins is a regular contributor and feature writer for The Predicament, Iowa’s oldest wrestling publication.

New York-based photographer Justin Hoch has created stunning, action-packed images at all levels of the sport, around the globe, including coverage of events in France and Iran. In addition to the editorial coverage that has been picked up by NBC, ESPN, and other outlets, Hoch has also brought wrestling photography into the fine art world, staging exhibitions in Los Angeles and New York featuring portraits of people from all facets of the wrestling community as well as documentary-style comparisons of wrestling in Senegal and the United States.

An online publication distributed to subscribers, the Lehigh University Wrestling News has provided fans with facts, figures, stats and commentary for 22 years. Founded by Denny Diehl, the LUWN is an entrepreneurial look into Lehigh wrestling coverage that has no equal in college wrestling. Diehl was the first to compile NCAA dual attendance (2002-16), was the founder of National Mat News, a print publication operating from 1975-1990 and published a 256-page history of Lehigh Wrestling in 1997.

NCAA social media strategist Kayci Woodley is no stranger to wrestling. An Iowa State alum, Woodley’s knowledge of the sport has helped the promotion and visibility of not just the NCAA Division I Wrestling Championships, but the college wrestling season as a whole. Woodley’s skills have provided a consistent branding effort with #NCAAwrestling and produced eye-catching content via the NCAA’s social media platforms.

Division I SID of the Year: Chas Dorman, Penn

One of the steadiest and reliable Sports Information Directors in all of college sports, not just wrestling, Chas Dorman has emerged as one of the best. Complete releases, statistics, match notes, active and creative social media campaigns – Dorman can and will do it all. Despite not coming from a wrestling background, Dorman has been an active voice for SIDs within the NWMA and his stellar work has made him a finalist for this award for a number of years.

A veteran journalist, Rich Tortorelli has been handling the media relations duties for Oklahoma City’s men’s and women’s wrestling teams for nearly a decade. With two teams to cover, one in the NAIA and one with the WCWA, Tortorelli balances 23 total sports in his small shop with effective professionalism. Totrorelli has also been helpful with media and communications efforts as OCU has hosted numerous women’s wrestling championships, both at the college level and by USA Wrestling.

The de facto Sports Information Director for the Eastern Intercollegiate Wrestling Association from 1990-2015, John Harmon is this year’s recipient of the Jay Hammond Memorial Service Award. The award is presented to a member of the wrestling community for outstanding work in the effort to educate and enhance the sport of wrestling through media.

Harmon, longtime friends with the late Hammond, is one of the true historians of college wrestling. With his cadre of wrestling junkies like Hammond, Diehl and Don Sayenga, Harmon’s been a humble but active player documenting the sport’s history. While his love of wrestling first centered around Lehigh University, Harmon’s EIWA newsletter compiled every result from every team in the conference for every wrestler, in the lineup or not. With Hammond, he published two complete histories of the EIWA. The historical significance of Harmon’s efforts cannot be understated and the NWMA presents him with its highest honor.

The NWMA represents the interests of journalists within the sport of wrestling. It shall be a resource for its members for networking and information sharing. In addition, the NWMA will strive to support the growth of wrestling and its position within the sports world and the general public by developing more quality coverage of the sport through all available media outlets. A focus on the history of the world’s oldest sport and accuracy in reporting on wrestling is the foundation of the organization’s mission.

Information on the organization can be found at www.nationalwrestlingmedia.com