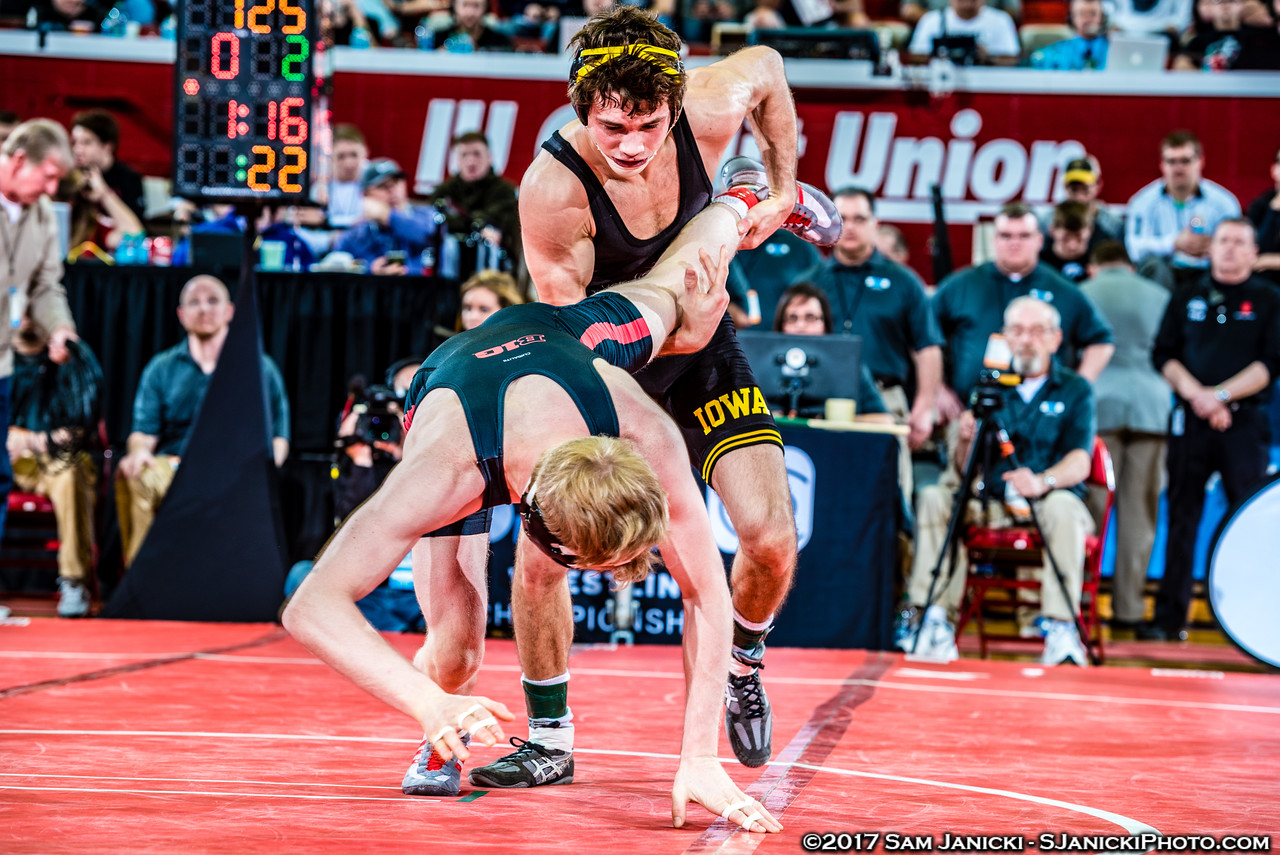 Listen to Lars and Ross break down the NCAA tournament on the latest episode of Potentially Dangerous:

#1 Thomas Gilman, Senior, Iowa – Gilman enters his final NCAA tournament with a #1 seed and a spotless 27-0 record. It’s no secret that the Hawkeyes senior 125 pounder is expecting nothing short of an NCAA Title after falling short in his previous two trips. Gilman has improved upon his finish in each season of his college career. He lost the 125lb spot as a freshman to teammate Cory Clark. As a sophomore he was shocked in the semis by Zeke Moisey of West Virginia, and last year he made it all the way to the finals by knocking off returning champ Nathan Tomasello of Ohio State in the semis but falling 6-3 to Nico Megaludis of Penn State in the finals. Gilman got a very favorable draw this year. The potentially seriously injured Nick Suriano of Penn State is on the opposite side as well as Joey Dance of Virginia Tech, Josh Terao of American, and Ethan Lizak of Minnesota. All four of the wrestlers just listed have given Gilman good goes this year or in years past.

US Dylan Peters, Senior, Northern Iowa – Peters has had up and down finishes to his last three seasons, although that has more to do with health than skill. The UNI senior is a two-time All-American finishing sixth twice as well as going 0-2 two years ago. Dylan has experienced another injury plagued season only wrestling 14 matches on the season and coming in unseeded. I’d be willing to bet that not a single wrestler in the 125-pound bracket would be looking forward to matching up with him early in the tournament. Peters draws the #4 seed Darian Cruz of Lehigh first round. The two haven’t met in college. Peters will have to knock off a couple of seeded wrestlers to reach the podium for a third time to finish out his career, but dont ever count out a kid who pulled out an AA finish with a torn ACL last year.

National outlook: All eyes will be on Nick Suriano Thursday morning to see how well his ankle is going to hold up. Suriano, when healthy, is the biggest threat to knock off Gilman, but that doesn’t mean he is the only one. If seeds were to hold, Gilman should meet up with Joey Dance of Virginia Tech in the finals. The two have met twice in college with both matches going to sudden victory. Dance has a lot tougher road to the finals than Gilman though as he will likely wrestle someone every match along the way that has a legitimate chance to reach the podium. If you like entertaining wrestlers, keep your eye on Josh Terao of American. He has a great shot to make the semis if he can get by Lizak of Minnesota and the potentially injured Suriano. Don’t be shocked if we have a few unseeded All-Americans at this weight as two-time AA Conor Youtsey of Michigan is also unseeded.

#4 Cory Clark, Senior, Iowa – Clark has managed to accomplish just about everything a guy could ask for in his college career. He’s a three-time All-American with two trips to the national finals. Only one thing has escaped him so far in his career and that one thing is a national title. It won’t be easy for him this weekend as he is in a stacked bracket, but it is definitely possible. 133 pounds is very top heavy with at least the top seven seeds having a legitimate shot at the title. Don’t overlook that first match for Clark as he will have returning AA at 125 from last year Connor Schram of Stanford. It doesn’t get a lot easier from there as he will likely meet up with the ever dangerous Earl Hall of Iowa State for the 7,000 time (slight exaggeration) in his career. That likely leads you right into stud freshman Stevan Micic of Michigan, National Champ Nathan Tomasello of Ohio State, and then whatever stud comes out on top of the bottom half if he plans on making the finals again. Clark’s shoulder has held up fairly well lately, but 4-5 matches against the best guys in the nation will be a true test.

#12 Josh Alber, Sophomore, Northern Iowa – Alber has had a solid season following up a 1-2 finish at nationals a year ago. He has numerous wins over guys seeded in the mid level, but doesn’t have a win over a top 5 ranked opponent to date. He should get plenty of chances to do so this weekend though. Alber will likely have #5 Stevan Micic of Michigan in the second round. Josh will have to beat someone seeded above him to reach the podium. He will either have to take out Micic on the frontside or Earl Hall and Eric Montoya of Nebraska on the backside.

#13 Earl Hall, Senior, Iowa State – Your guess is as good as mine when it comes to how Earl Hall will finish this weekend. The version of Earl Hall that is a two-time AA is a threat to absolutely everyone in this bracket with his big moves. The version that we have seen so far this year that might be a little burnt out from the extreme grind of a college wrestling career is a long shot to reach the podium though. I expect Hall to bring it in his last trip to NCAA’s though. Hall should meet up with Cory Clark in the second round, then he will likely get put right back into the same situation I discussed with Alber above.

National outlook: Wrestle this weight class five times and you might get five different champs. Tomasello already has a national title to his credit although it was at 125, Clark has been to the finals twice, Gross has made huge strides since falling in the blood round last year, then throw in two stud freshman in Micic and Kaid Brock of Oklahoma State. That doesn’t even include Eric Montoya of Nebraska who has beaten Clark this year or the #6 seed Dom Forys of Pitt who has just one loss on the season. Clark hasn’t shown too many signs of his shoulder bothering him the last few matches, but where I think it hurts him most is his ability to hold guys down in the top position. I think this will be all Tomasello needs to sneak out another victory in the semis. We should be in for some great quarterfinals at this weight.

#9 Colton McCrystal, Junior, Nebraska – McCrystal earned the #9 seed at the NCAA’s and will face Ohio’s Noah Forrider Thursday morning.  Missouri’s Jaydin Eierman will be Colton’s next foe, Eierman started the season at 133 before bumping to 141 later in the year.  I’m picking the Sergeant Bluff-Luton product in the minor upset, setting up a showdown with #1 seeded and returning National Champion Dean Heil (Oklahoma State).

US Topher Carton, Senior, Iowa – Carton enters the championships after a up and down B1G tournament, which saw him go 1-2 in the main tournament.  However he was able to win 2 straight matches and secure the final automatic qualifier spot from the B1G’s.  He will be rewarded with a pigtail match at the NCAA tournament against Joshua Heil (Campbell).  I like Carton’s chances in the opening bout.  Topher’s run on the front side end when he meets up against #6 seed George DiCamillo (Virigina).

National outlook: The Champ returns to defend his crown at 141. Heil comes into the championships fresh off a victory over fellow NCAA finalist Bryce Meredith at the Big 12 conference championship. I don’t see Dean having much trouble making the semifinals out of his quarter. The next quarter features and pair of east coast wrestlers in Ashnault (Rutgers) and Kolodzik (Princeton). Kolodzik won the previous matchup 4-3 and is my pick to meet Dean. 2016 third place finisher Joey McKenna headline the third quarter. #10 Bryce Meredith and #2 Kevin Jack should be a great quarter with the winner meeting McKenna for a finals spot.

#5 Brandon Sorensen, Junior, Iowa – Sorensen enters the championships as the #5 seed after dropping a hard fought 2-1 decision in the B1G championship semi-finals to Micah Jordan (Ohio State).  His first round opponent will be Matthew Zovistoski (Appalachian State).  Sorensen will need to stay focused in round two against Sam Speno (North Carolina State) if he hopes to setup a re-match with Jordan in the quarters.  Sorensen won his previous match with Speno 10-2 at the Midland championships.

#7 Max Thomsen, Freshman, Northern Iowa – Max brings a 27-5 record into his first NCAA championships appearance with all of those loses to seeded wrestlers.  Thomsen will face Matthew Cimato (Drexel) first round, with Laike Gardner (Lehigh) likely awaits in round two.  #2 seed and returning All-American Anthony Collica will be to much for the freshman in the quarters sending him to the backside needing a another win to AA.

National outlook: Defending champion Zain Retherford headlines a deep weight class and is wrestling at a very high level right now, having defeated #4 seed Jordan by tech fall in the B1G finals.  The Sorensen/Jordan winner will need to re-focus and be ready to go Friday night if they want any chance of dethroning the champ.  The third quarter features #3 seed Missouri’s Lavion Mayes and #6 seed Solomon Chishko, Mayes won a tight one over Chishko in November 6-3.  #2 Anthony Collica will await the Mayes/Chishko winner in the bottom semi.

#2 Michael Kemerer, Freshman, Iowa – In his first year in the Hawkeye lineup Kermerer put together a 27-2 record, with both of those losses coming to #1 seed Jason Nolf of Penn State. Kemerer will open the tournament with Casey Sparkman of Kent State and from there he will face either TJ Ruschell of Wisconsin or #15 Sal Mastriani of Virginia Tech. If Kemerer reaches the quarterfinals he is expected to see either Colin Heffernan of Central Michigan or Dylan Palacio of Cornell. Palacio’s style could present challenges for the freshman, but in terms of his overall draw Kemerer’s chances of reaching the finals are about as good as one could hope for.

With Nolf and Kemerer taking the top seeds at this weight the next two seeds went to Missouri’s Joey Lavallee and Nebraska’s Tyler Berger, followed by Oklahoma State’s Joe Smith at the #5 seed. If Vegas were putting odds out for this weight, chances are they would heavily favor Nolf, who has shown virtually no weakness in each of his 22 wins this season. In fact Kemerer is the only wrestler he has failed to bonus this season and both of those matches were well in hand for the Nittany Lion. The top four seeds have been wrestling really well at this point in the season which makes it hard to find too many crazy upsets in this bracket.