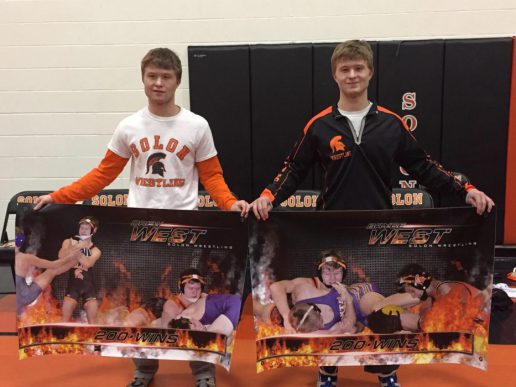 The state’s top two remaining seniors are finally off the board as Solon’s Bryce and Drew West have officially committed to wrestle at Northern Illinois. In February both wrestlers eclipsed 200 career wins on the same night during regional duals. Bryce would go on to tie the state record by winning his 210th match in the state finals joining Union’s Max Thomsen as the state’s all-time wins leader.

“I selected Northern Illinois because of it’s wrestling and how it’s a family with all the guys.” Bryce told IAwrestle.

“I chose Northern Illinois because it felt like home and a fut feeling that NIU was the right place for me. The other school it was between was Boise State. It was a really hard chose between the two schools.” Said Drew.

In addition to the state record, Bryce also made history by winning his third state title at 120 pounds defeating Blake Steege of Denver-Tripoli 15-5 in the finals. The following match Drew was defeated in a tight 3-2 battle with New Hampton’s Michael Millage in the 126-pound final. The twins combined for over 400 career victories, eight state medals, and four state titles, and were a big reason for Solon being able to bring home it’s first ever wrestling state title.

In addition to their folkstyle accolades, Bryce and Drew have also brought home hardware from national tournaments for the state of Iowa with the pair earning six All-American honors at the Fargo high school national championships for freestyle and Greco-Roman with both claiming runner-up in the latter style in 2014. Drew also represented the United States at the 2014 FILA (now known as UWW) Cadet World Championships in Greco-Roman.

Bryce and Drew selected Northern Illinois over Boise State and project to wrestle at 125 or 133 pounds for the Huskies.

One thought on “Bryce and Drew West commit to Northern Illinois”