Class 2A First Round Must Watch Matches 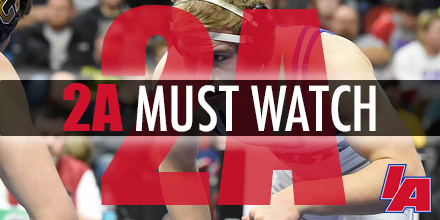 There are plenty of great early round matchups in class 2A this year. I am going to highlight what I think are 10 of the best and most important matches in the 1st round.

This should be a great match between 2 long 106 pounders who are good in the top position. Esmoil is a freshman who has been wrestling better as the season progressed. Weeks is a Junior who has been good throughout his career but makes his first trip to state. He has been hot as of late with wins over #2 Thomsen & #4 Robinson in the last 2 weeks. I look for the winner of this match to be a favorite to reach the finals on the bottom side.

This is a huge matchup this early in the tournament. Ruffridge wins his district and his reward is the #2 ranked kid in state who survived a brutal districts bracket that left #3 Hensley at home. Ruffridge wrestled much of the season at 113 before deciding that the cut wasn’t worth it and has wrestled well at a more natural weight of 120. Cox was a state runner up last season and his tough road to try and return starts right off the bat.

Wright comes in as a district runner up to #1 Millage and draws #4 Tacchia right out of the gate. Both of these guys have had great seasons and look to place very high at state. Whoever loses will have a long road through the consolation bracket. Tacchia comes in at 38-1 but his lone loss is to Riley Wright. Can he avenge that loss and advance on in the championship bracket?

I know that the rankings don’t look all that close but do not sleep on the very tough Probasco who comes in 44-5 and placed 5th last year. This is a VERY deep weight and Probasco is definitely capable of placing very high. Curry is the favorite here but this is a tough first round match for anyone.

Don’t let Wilson’s 9 losses fool you as they have all came at the hands of guys ranked in the top 3 in 1A & 2A. Vest comes in at 44-1 and has had a great Junior season. I look for the winner of this match to be the favorite to reach the semifinals.

Joe Kelly was a state runner up last year and has been #1 from start to finish this season. Pecinovsky lost a close bout in the semifinals last year and is hoping to improve on that. These are two very powerful wrestlers that will get after it and it should make for a fun match to watch in round 1.

Gorman has had a great senior season and has been one of the keys to New Hampton being the #1 team in 2A. However, they only got 6 guys through a brutal district and if they hope to win the team title I believe that they need Gorman to be in the finals. His path won’t be easy at all and it starts in round 1 against talented Sophomore Westphal-Edwards.

It’s not often that you see two wrestlers ranked in the top 3 meet in the opening round of the state tournament. However, Moore lost to #1 ranked Bryce Esmoil at districts and drew Fritz right off the bat. They actually wrestled each other in late January in the finals at the Bob Leuders Invitational and Moore won a 3-2 decision. I look for this to be another very close match and it should have big implications on who makes the finals.

Both these guys are Seniors who qualified for state last season but are looking to go out on the award stand this year. Both guys like to be physical and I look for this to be a good battle. With the top 3 ranked wrestlers on the bottom side of the bracket this could have big implications on who makes the state finals on the top side.

These are 2 active heavyweights who can put up some points and it should be fun to watch. Van’t Hof placed 5th last season and put together another solid campaign this year. Linderbaum has taken a huge leap in his junior season and had some huge wins including a 7-5 decision over Van’t Hof in late January at the Herb Irgens Invitational.