Class 3A First Round Must Watch Matches 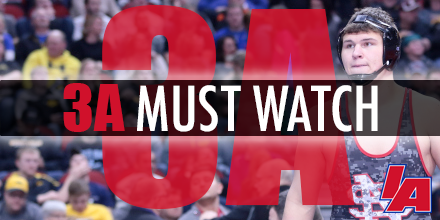 106 – #5 Dillon Gottschalk (Dubuque Hempstead) vs #6 Evan Yant (Waverly-Shell Rock)
Gottschalk, a junior, finished 7th at this weight a year ago and is making his 3rd appearance at State.  Yant has wrestled one of the toughest schedules in 3A at this weight and has closed the gap on the top competition.  This one will not disappoint, all eyes on Mat 1 at 9AM Thursday morning.

113 – #2 Kyle Biscoglia (Waukee) vs #5 Jacob Close (Epworth, Western Dubuque)
Biscoglia, 106 state champ last year, is up a weight and looking to repeat that climb back to the top of the podium.  The Waukee junior has only lost to #1 Bennett so far this year.  Close on the other hand missed over a month of competition before returning for districts, where he dropped a close 4-3 decision to Jakey Penrith (Cedar Falls) in the finals.

120 – #5 Noah Hughes-Reilly (Valley, WDM) vs #7 Connor Sexton (Indianola)
This one is a rematch of the Ed Winger semi-finals, Hughes-Reilly won that one 1-0.  Hughes-Reilly’s only losses at this weight in class have been to #2 Gauge Perrien (SEP).  Sexton comes in fresh off a runner-up finish in District 1 where he defeated No. 8 Max Tracy (DCG) 3-1 in SV-1 before falling to Perrien 5-2 in the finals.

126 – #4 Will Foreman (Cedar Rapids Washington) vs #6 Damond Lockner (Fort Dodge)
This one could have huge team point implications for the Dodgers as the winner here will be the favorite in their quarter-final match.  Foreman comes in with zero losses in 3A but has yet to wrestle anyone in the top 10.  Lockner had a hiccup first match of the year but has been solid the rest of the way only losing to top 3 ranked wrestlers.

132 – #5 Trenten Wennermark (Prairie, CR) vs #10 Matthew Jordan (DM East)
Wennermark qualified last year at 126 but was unable to get his hand raised in two hard fought matches.  This year he been a big factor in the middle of the Praire lineup.  Jordan placed 6th last year at 120 but comes in having gone 5-5 in his last 10 matches.  How Jordan handles the length of Wennermark, could go a long way in deciding this one.

145 – #2 Grant Stotts (Valley, WDM) vs #5 Josh Gerke (Xaiver, CR)
The defending state champ has had little trouble with anyone not named Barnes this year.  Gerke has three losses on the year all to one guy(Conway), who is on the opposite side of the bracket.  This top 5 matchup should be a thriller in the middle weights on Thursday.

152 – #3 Austin Yant (Waverly-Shell Rock) vs #4 Alex Ward (Dubuque Hempstead)
These two Northeast Iowa products have somehow not met this year.  Yant has won 5 of 6 tournaments he’s wrestled in including Keith Young, Cheesehead (WI), Rick Caldwell, NEIC and District 8.  Ward had to battle hard just to get to state defeating #5 Jacob Wempen (Linn-Mar) 6-4 in a wrestle-back after losing to #6 Colin Conway (Marion) in the finals at District 2.

170 – #5 Gavin Babcock (Southeast Polk) vs #4 Austin Lamm (Urbandale)
These two have a history, Lamm owns the career series lead 3-1, winning the last time out 4-3 in a dual February 2nd.  Babcock is a cradler and if he locks it up more times than not its, light outs.  Lamm seems to have cracked the code, however and will look to make the most of his senior season.  This one is big for SEP and the team race.

195 – #4 Jacob Dykes (Iowa City High) vs #3 Connor Corbin (Valley, WDM)
Dykes comes in a unblemished record with most of his competition coming from the eastern side of the state.  Corbin a returning place-winner from last year is looking to cap a senior season with a title before heading off to wrestle in college, hopefully D1. This could be the best of all the first round match-ups in 3A.

285 – #3 Eagan Lickiss (Indianola) vs #5 Omar Begic (Waterloo East)
Lickiss was 5th last year at this weight, Begic was 7th.  This will be the third time these two giants have met in their career, with each wrestler owning a victory in the series.