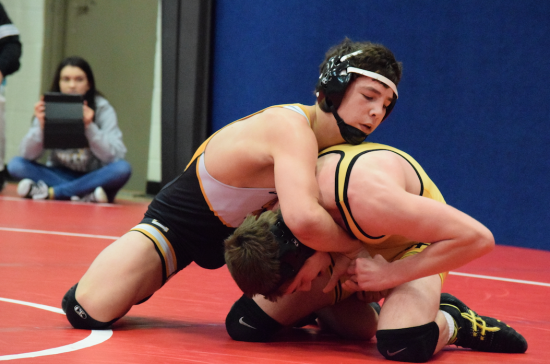 No. 1 Southeast Polk vs No. 8 Prairie, Cedar Rapids

The Rams come in with an unblemished dual record on the year, having defeated No. 2 Valley, WDM twice along the way. Prairie comes into state riding a 7 dual meet win streak, including a win over no. 5 Waverly-Shell Rock.  The depth in the SEP lineup will carry the Rams to a victory here.

No. 4 Epworth, Western Dubuque vs No. 5 Waverly-Shell Rock

This will be an interesting clash of 2 Northeast Iowa powers.  The two teams met back on December 16 at the Battle of Waterloo with WSR coming out on top 42-36.  At their first meeting, there were 11 falls and a forfeit.  Bonus points will tell the story in this rematch; I am picking the Go-Hawks for this dual.

No. 2 Valley, West Des Moines vs No. 7 Indianola

The defending dual state champions will be looking for another shot at Southeast Polk, but will first have to battle an always tough Manny coached Indianola team.  However, in the end, Valley has too much firepower for the Indians and will move on to the semis.

No. 3 North Scott, Eldridge vs No. 6 Fort Dodge

North Scott has had a good year but I’m not sure we’ve seen their full lineup wrestle yet. Finally, though, it looks like everyone is back in the lineup for State.  The Dodgers have some hammers, but show a lack in overall depth up and down the lineup; this will make it tough to hang with the top teams in 3A.  Look for North Scott to have little trouble in this one.

No. 1 Southeast Polk vs No. 5 Waverly-Shell Rock

It will be interesting to see how the coaches play their cards in this one.  Southeast Polk brings 10 individual qualifiers, while Waverly was able to qualify 7.  We could see a top 5 matchup at 120 with No. 2 Gauge Perrien (SEP) and No. 4 Dylan Albrecht hooking up.  The middle of the SEP lineup is probably the best in the state and will carry them back to the finals.

No. 2 Valley, West Des Moines vs No. 3 North Scott, Eldridge

These teams crossed paths at Keith Young and Ed Winger, but didn’t get the opportunity to meet at The Battle of Waterloo.  The matchup we’re craving to see again is No. 1 Rock Lombardi and No. 2 Wyatt Wriedt.  As mentioned above, North Scott is getting healthy at an opportune time, but I believe the experience and talent on the Valley team will lead them to victory in this matchup.

No. 1 Southeast Polk vs No. 2 Valley, West Des Moines

The rematch from last year’s state dual championship will take place at 6:30PM on Wednesday on Mat 6.  Last year it was Valley’s Joel Shapiro securing the fall in the last match of the dual for a 31-26 victory.  The two teams have locked ‘em up twice already this year with the Rams winning both (36-30 and 43-15).  The Tigers were without the services of the Lombardi brothers the second time around.  Another possible matchup between No. 1 Zach Barnes and No. 2 Grant Stotts is worth the price of admission.  Grab your popcorn folks this will be a good one.

2017 Class 3A State Dual Champions – The Rams of Southeast Polk