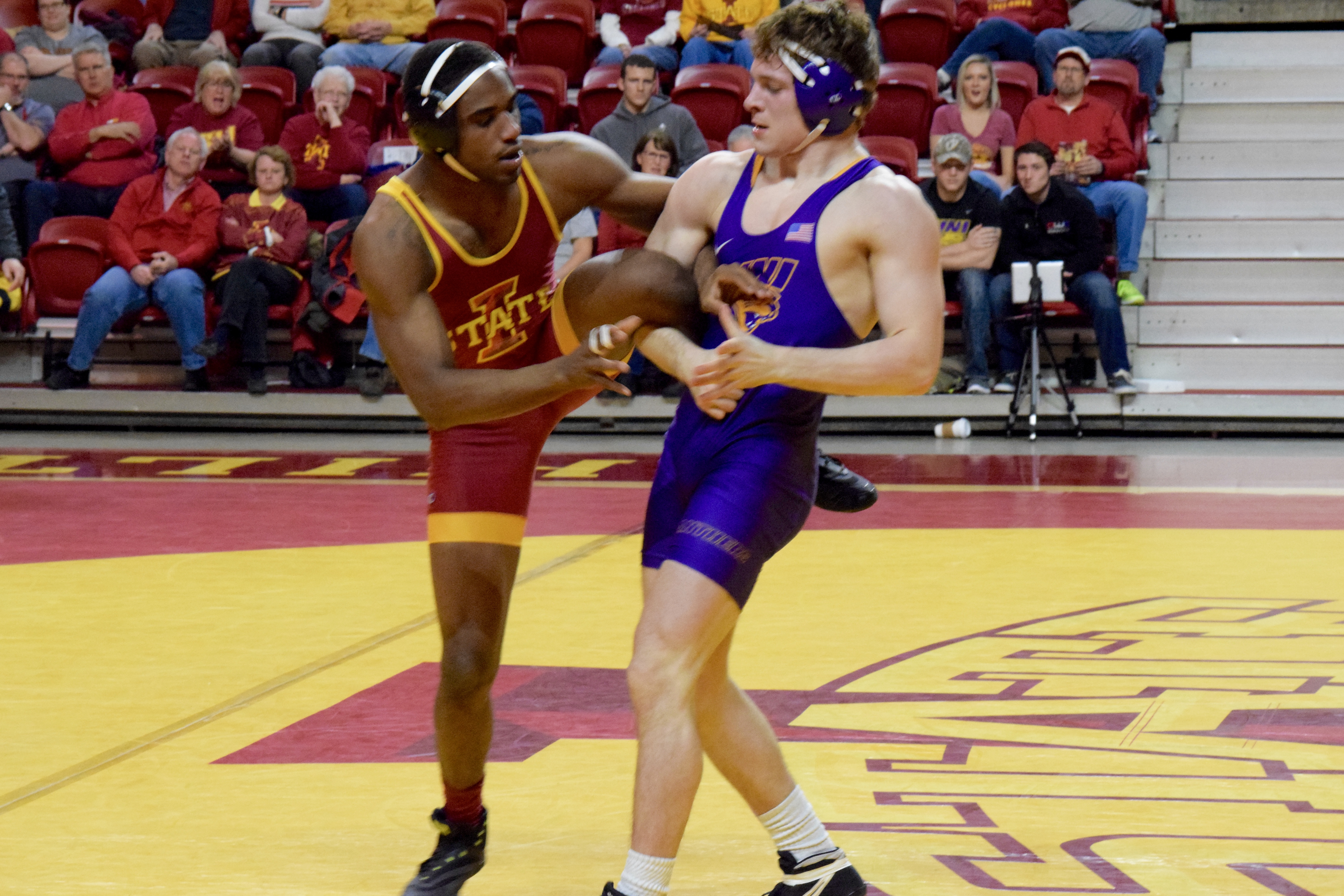 Dual is scheduled to start at 1PM, refresh often for updates!

#23 UNI vs Eastern Michigan
125: Jay Schwarm (UNI) vs Cory Simpson (KSU)
1st: Alright I’ve got no sound on my stream, so that’s annoying. Schwarm right out of the gate with a T2 and a claw ride, Official starts swiping for no reason, and we go OOB. Restart, Schwarm with a cross-body ride and nearly locks a cradle, and gets it!! He falls back and gets the NF4 and now is working for the fall….he’s got to be close the cradle is locked tight and THERES THE FALL!! No clock on the stream so I don’t know how fast it was.

141: Tyler Willers (UNI) vs Chance Driscoll (KSU)
1st: Alright pretty good start to the dual so far. Willers up now against Driscoll, they’ve been tying up for a while, outside single from Driscoll and Willers falls to the mat and gives up the T2. 2-0 for Driscoll. Again not sure of the time because there isn’t a clock on the stream. Oh and now my audio works, yay for small miracles. Driscoll rides Willers out of the period and we go to the 2nd.

2nd: Driscoll goes on bottom to start, he rolls, sits, then turns into Willers and gets the legs and puts Willers down for the R2. 4-0 Driscoll leads. Willers up and out quickly, 4-1. Driscoll has 45 seconds of RT. Russian tie from Willers, nothing. Driscoll doesn’t really want to tie up, neither does Willers I don’t think, but they do anyway and they stalemate. 22 seconds, restart, Willers with a half shot, nothing, reshot from Driscoll, nothing, and that’s the 2nd.

3rd: Willers goes down to start, Driscoll with a crossbody ride but Willers rolls through and nearly gets a R2 but not quite, and now Driscoll was about half a second away from getting a NF2 but no points, and they stalemate really quick on the edge. Restart, Willers sits, rolls, rolls again and gets the E1, 4-2 but Driscoll has RT now. Willers pushing the pace now, he gets a stall call on Driscoll, that’s weird. Driscoll takes a shot right away, but Willers dives and rolls, and we stalemate. Willers with a shot, nothing, again, nothing, and tha’ts it.

149: #8 Max Thomsen (UNI) vs Tim Rooney (KSU)
1st: Off the whistle they tie up and each man goes to their knees, and the ref calls a stalemate. Official been calling quick stalemates so far. Rooney with a shot but Thomsen fights him off and gets around for a T2, now he works a tilt and gets a NF2, rolls again but he didn’t break the hold so it’s just one NF2, 4-0 Thomsen leads. Rooney gets up and out, 4-1, and Thomsen gets another T2 on a double, and was really close to another NF2 but no call. Thomsen rides tough, lots of forward pressure as he works an armbar, but it’s not really going anywhere, and that’s the period.

2nd: Rooney is down to start after trying to go neutral, but his coaches wouldn’t let him. Thomsen rides forward again, Thomsen has the armbar now and is trying to work him over, but Rooney gets the arm back and gets hit with stalling. Thomsen works a tilt again and gets the NF2, so it’s 8-1, now he’s got the armbar in again and nearly works him over, but can’t quite get there. Another stall on Rooney, 9-1, but Thomsen has a half in and works him over this time for the fall!!

157: Paden Moore (UNI) vs Casey Sparkman (KSU)
1st: Blood time for Sparkman. I just noticed that both squads benches are on the same side of the mat. That’s weird. KSU playing a really catchy ad during the bloodtime, that was pretty good. Neither guy with a lot of action so far, no shots yet, both kind of faking in and out and they go OOB. Restart, Moore with an ankle pick and he shelves that leg to try to work it up but Sparkman has a wizzar in and nearly picks an ankle of Moore’s and they go OOB. Restart, 30 seconds left. Both tie up, break, again, fake by Sparkman, and a double leg by Sparkman with 1 second left and he gets the T2. Wow.

2nd: Caution on…someone…not sure who I was looking up. Sparkman down to start, he almost hits a switch but Moore follows, OOB. Restart. Sparkman to his feet and Moore drops to an ankle and forces him OOB again. Restart. Sparkman to his feet but Moore with forward pressure and forces him back down, and again they go OOB. Sigh. Sparkman up again, Moore follows again, but Sparkman sits out and Moore is really high now but they go OOB again. Restart and Moore has RT but Sparkman sits out and gets out this time. 3-0 Sparkman leads. Head snap from Sparkman and he nearly gets to a leg, but Moore fights him off, not a lot of other action and we go to the 3rd.

3rd: Moore down to start, Sparkman drops to an ankle and forces Moore down, that erases RT. Moore back up and out, 3-1 but we have more bloodtime for Sparkman. No catchy jingle this time, and we start back up with 1:35 left, Sparkman with a outside single leg and covers the other ankle for a T2, 5-1. Moore up and out, 5-2, Moore with a shot but he doesn’t follow through and Sparkman with a reshot and he gets another T2, 7-2 with 52 seconds left. Sparkman goes neutral to start, 7-3 he leads. They tie up, Moore tyring to work inside but that doesn’t work, shot from Moore, nothing, KSU bench wants to see another shot from Sparkman, 10 seconds left, he tries, Moore fights him off twice and that’s the match.

165: #10 Bryce Steiert (UNI) vs Isaac Bast (KSU)
1st: Steiert up now, 1 minute in and nothing much has happened, Steiert with kind of a bad double leg but he turns it into a single leg and he just muscles his way to a T2. 2-0 Steiert and he cuts Bast but Bast with a single leg quickly off that and Steiert does as good a job as I’ve seen him fight that off. He had concrete hips to start and then threw a wizzar in to get out. They reset, and the stream froze, and now Steiert is on top so it’s 4-0 and he has the legs tangled up and works him over for a NF4! That’s all we have time for though and it’s 8-1 to the 2nd.

2nd: Bast down to start, he works his way up, 8-2. Steiert with an outside single and he gets the T2 and has the legs tangled up again, Steiert working hard to roll Bast over for the fall, but can’t quite get there, and resets again and rolls him over gets the fall!!

174: #12 Taylor Lujan  (UNI) vs Jared Walker (KSU)
1st: Was updating the Twitter, so I missed the T2, but Walker took down Lujan quick into the period, but he’s up fairly quickly and it’s 2-1. 1 minute gone by and Lujan hits a duck under for a T2, that continues to be slick for him, and he nearly works a tilt into some NF points but nothing. Now he gets too high and Walker gets up and out, 3-3. They tie up and Walker just drops down to an ankle and nearly makes something of it but Lujan sprawls out and they stalemate. Restart and AGAIN Walker is in on a single leg but Lujan goes heavy hips and locks around Walker’s midsection so Walker can’t finish and we stalemate. 6 sec left and that’s the period.

2nd: I don’t really care for how easily Walker is getting to Lujan’s legs. Walker is down to start, Lujan with a claw ride, Walker sits out, Lujan sucks him back, Walker to his feet and Lujan returns him and flattens him out. Lujan does a good job here of keeping him down, but we stalemate. Now my wife is vacuuming so I can’t hear the commentator (how DARE she keep our home clean!!) but Lujan is still riding tough, I just don’t know how much is left, but as Walker gets up the buzzer sounds so that’s the 2nd.

3rd: Lujan down to start, he rolls right away, gets the R2 and then lets Walker up, so it’s 5-4. Walker in on a single leg AGAIN and now switches to a double but Lujan does a good job of sprawling and forces the stalemate. Would really like to see Lujan connect on a shot, but they’re just tying up. Walker with a single leg try from a mile away, Lujan meets him. They reset. Walker with another outside single and Lujan just grabs the far ankle to run the clock out, and he gets the win.

184: #14 Drew Foster (UNI) vs Jerald Spohn (KSU)
1st: Sorry, updating Twitter again, Foster with a shot early, Spohn rolls and gets out, PD is called. Foster again with a shot, but Spohn fights out. Foster in again with a shot and gets the T2 this time and tilts his way to a NF2, so it’s 4-0. Stalemate, restart, Foster with a half in, and now the stream is frozen…grrrr. Now the stream comes back, but it’s Paden’s match and that pizza ad is playing again.

2nd:  Alright I got that figured out now, Foster is up 9-0 after a (assumed second) stall warning on Spohn. Foster is riding with under a minute to go, he’s trying to work in anything, half, now a claw, but Spohn isn’t moving on bottom and the stream froze again. But we’re back and Spohn sits, that doesn’t work, so he bellies out again. 10 seconds left and that’s the period.

3rd: I guess it’s 10-0, I must have missed something somewhere. The stream is frozen again, so I’ll update when I can. Foster goes on top to start the period, Spohn is just really exhausted, he’s taking a really long time to get set. Spohn tries to roll off the whistle, that doesn’t work as Foster just follows him. Foster riding tough again, trying to get anything in against a guy who just wants to lay on his belly. Foster trying for an arm bar, but can’t get there, stall on Spohn so it’s 11-0, now Foster tries for a crossface cradle but Spohn gets up and out, 11-1. On their feet, Spohn with a bad shot and Foster throws him by and gets behind him for a T2 at the end, and that’s it.

197: Jacob Holschlag (UNI) vs Stephen Suglio (KSU)
1st: Mostly tie ups to start with. Nothing much really. Now Suglio with a single leg as Holschlag hangs on around the waste of Suglio and the stream goes out are you kidding!?!? Sigh. And it comes back with 10 seconds left as Suglio is in on a double leg and all but gets the T2 before time runs out.

3rd: Suglio down to start again, Holschlag tries to work as half as Suglio gets to his feet but Holschlag forces him back down, now their sitting again but Holschlag tightens him up but no NF points, that was really close, but Suglio able to shrug Holschlag off and get another R2, 8-1 and he works another tilt, so it’s 12-1 after the NF4. Suglio rides Holschlag out and that’s it.

3 thoughts on “UNI vs Kent State Play by Play”