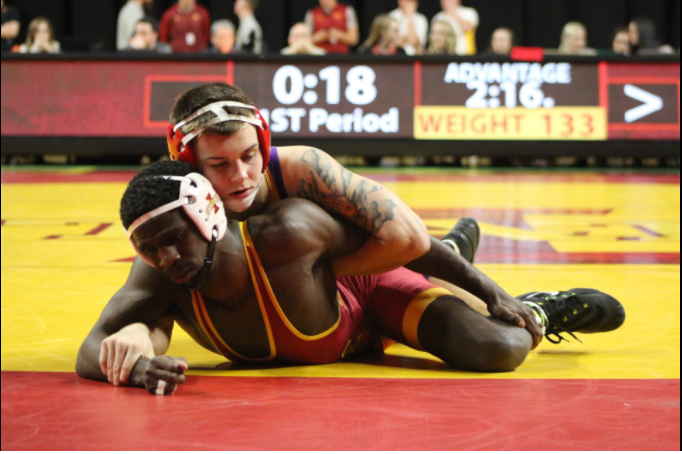 For the first time since 2003 the UNI wrestling squad will walk out of Hilton Coliseum with a winning score. The Panthers won 20-12 on the strength of the strength of six wins, but some in the lineup weren’t 100% happy.

“20-12, that’s a pretty good win, but that was ugly for us, I think. There’s just a few times where we really let it slip,” Northern Iowa’s 133 pounder Josh Alber said after the dual. “I can’t think of many matches that they should have won, honestly. D1 wrestling, sometimes it takes the ugly wins.”

If that was ugly, UNI could use some more wins like it. The Panthers won every match they were supposed to, starting off with a pair of major decisions in the first half of the dual. Max Thomsen got things started off at 149 with a bang.

“I knew when they drew 49 first, I knew I had to go out and try to make an impact right away,” Thomsen said after his match. “I knew I wanted bonus right away.”

Thomsen came away with an 11-1 major decision to put UNI up 4-0, and teammate Bryce Steiert would match him with a 14-5 point win over Logan Breitenbach to push UNI’s lead to 8-6.

Iowa State would answer though. At 157 pounds Colston DiBlasi scored a 12-8 decision over Paden Moore. Moore lead 8-2 in the third before giving up a reversal and a pair of four point nearfalls to drop the match.

#10 Pat Downey took the mat at 184 for the Cyclones, he scored a 9-5 win over UNI’s #14 Drew Foster. It was clear that Downey was still feeling the effects of an injury, as he couldn’t really move around too much. Downey was hit with three stall calls in the match, all from the neutral position.

Downey’s win gave the Cyclones a 9-8 lead going into the intermission, and they seemed in a position to control the rest of the dual. UNI had other plans, rattling off a string a four straight wins on the backside of the dual.

At 197 Jacob Holschlag came out and scored a 5-4 win over Marcus Harrington to kick things off. Harrington didn’t look like he was 100% though, especially at the end of the match. This was Holschlag’s first win at 197 pounds, after wrestling at 184 for most of the season, and it pushed the Panthers ahead for good.

Heavyweight JJ Everard took Quean Smith to sudden victory, where it was tied 1-1. Smith would take a shot that Smith sprawled on, and Everard got around the bigger Smith quickly for the takedown. This was a big swing match in the dual, as a Smith win puts ISU up 12-11 and gives takes away UNI’s momentum.

At 125 Jay Schwarm came out against Kyle Larson and came away with another win in what seemed like a swing match going into the dual. Schwarm scored a takedown in the first 30 seconds of the match and rode Larson out of the period. He would go on to win 8-4.

133 was the match that everyone really wanted to see. #14 Josh Alber had lost to #12 Earl Hall

Hall three times in his career, but he came out on fire against the Cyclone, taking him down in similar fashion to Schwarm, in less than 30 seconds, and riding him for nearly the entire period. Hall would get hit with two stall warnings and trail 3-1 after the first, but he would make a comeback to force overtime.

The overtime period featured a hell of a scramble, Hall was in on a shot but Alber did a great job of fighting and would eventually come out on top for the 8-6 win.

“I wish I could describe it,” Alber said after the match. “Muscle memory and survival mode. I have to take him out before he takes me out. Just keep wrestling.”

That win locked the dual up for the Panthers, putting them up 20-9 with just one match left. Iowa State’s John Meeks would defeat Tyler Willers 20-12 in the last match of the night.

UNI has a quick turnaround, as they return home Sunday morning to take on a tough Eastern Michigan squad. We’ll have a preview up for that dual tomorrow morning, and full play by play from the West Gym on Sunday. Iowa State hosts Oklahoma in Hilton on Friday.