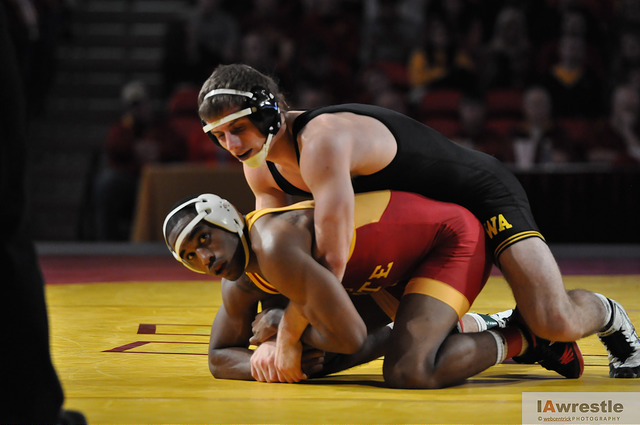 The Iowa Hawkeyes return to Carver for their first home dual since November 18th to face an Iowa State squad that is getting closer and closer to returning to full strength. The all-time series between the two teams currently stands at 62-16-2 in favor of the Hawkeyes, who are also currently riding a 12 match win streak against the Cyclones that coach Kevin Jackson would love to snap. Iowa coach Tom Brands is 11-0 in his career against the Cyclones, including last year’s meeting where Iowa won 33-6.

So far this season Iowa State has struggled to put their whole lineup out on the mat at same time, and while they are still expected to be without one key starter – All-American Pat Downey who wrestles 184 – This will be the closest the team has come to date in fielding their full squad. Downey has not been completely ruled out for this weekend’s contest, but he hasn’t wrestled a match since defaulting out of the Cyclone Open. Downey in the lineup certainly makes the dual more interesting, as he would face Iowa All-American Sammy Brooks, but for now we project Carson Powell as the starter.

Similarly, the Hawkeyes will also be without one of their start wrestlers in the lineup, as two-time finalist Cory Clark is expected to miss his second straight dual while dealing with an undisclosed injury. Instead Phil Laux will start for Iowa at 133 pounds, and he will be tasked with taking on Iowa State All-American Earl Hall.

We expect an all Iowa battle at 141 pounds with Davenport Assumption prep Topher Carton likely facing either Ubrandale prep Gabe Moreno or Des Moines native John Meeks. Carton is off to a 9-0 start to the season and has worked his way into Trackwrestling’s top 20. Despite yesterday’s report that true freshman Kanen Storr *could* start, the likely scenario right now looks like Meeks.

Redshirt freshman Chase Straw is into Track’s rankings at #22 but he faces #2 Brandon Sorensen who is always solid on his home mat (21-2 career record in Carver) despite coming off an uncharacteristic performance in South Dakota.

A pair of redshirt freshman will make their Cy-Hawk debuts at 157 pounds with Michael Kemerer facing Colston DiBlasi. DiBlasi enters this weekend’s contest with eight falls on the season already, including adding two last weekend at the Cliff Keen Invite.

He wrestled Sammy Brooks in last year’s dual at 184 pounds, but Dane Pestano should be the starter at 165 taking on redshirt freshman Joey Gunther. The Hawkeyes plan to weigh in true freshman Alex Marinelli for the second straight week, but expect to see Gunther take the mat.

We will get an All-American battle at 174 pounds with Alex Meyer and Lelund Weatherspoon meeting for the second time in their careers. The first meeting was at last year’s dual when Meyer came out on top by a score of 7-1.

The third and probably final battle between former Iowa preps will occur at 197 pounds (141 and 149 were the other two) with Marcus Harrington favored in his match with Cash Wilcke. Harrington made his season debut last weekend at the Cliff Keen Invite after an injury held him out for the first month. Wilcke is coming off his first varsity loss when he went down to SDSU’s Nate Rotert last weekend.

For the third straight week we will see Sam Stoll listed on Iowa’s probable starter list, but odds are redshirt freshman Steven Holloway gets the start once again. Stoll appears to be cleared to go, but much like the Cory Clark situation, expect Brands to be “(c)onservative in our approach to competition” with Stoll as well.

It seems strange to go a whole preview and not mention Thomas Gilman, but the truth is the senior has been business as usual starting the season 7-0 with seven bonus wins. He’ll be up against redshirt freshman Markus Simmons, who is a bigger 125 pound wrestler, but doesn’t have the experience of competing against college wrestling’s elite yet.