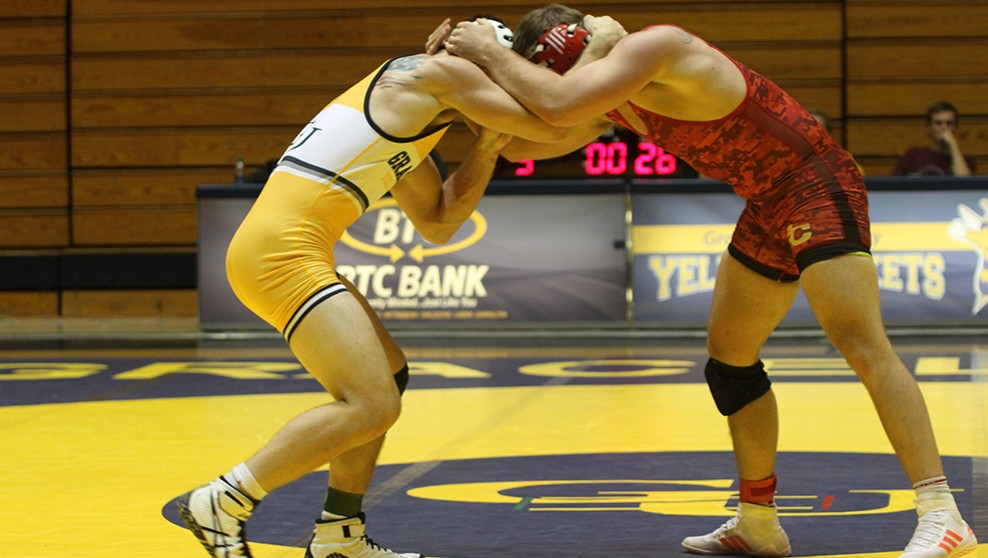 OTTAWA, KS – Graceland University Wrestling posted a clean sweep over Ottawa University, winning the dual 54-0. The Yellowjackets are now 2-1 on the season.

Graceland started off the night with Daniel Mashiell picking up a forfeit victory at the 125 lb weight class.

The teams then moved to 133 lbs, where Graceland’s Kruz Adamson won by fall over Kylloe Goedert to push the Jackets lead to 12-0.

Calab Ashe and Brandon Seward kept the momentum going as the two both won by fall. Ashe (141) defeated Grant Hollingsworth, while Seward (149) took down Micahel Aldrich as Graceland led 24-0 after four matches.

The 157 match between Coulter Allen and John Pacha was close as Allen won by decision (6-4). Dakota Britt then competed at 165lbs against Noah Hart. The two battled to a 10-7 decision with Britt taking the match.

Ryan Paige earned a win by forfeit at 197 lbs. Will Samuels rounded out the night at 285 lbs, winning by fall over Caelan McMahon. Graceland took the dual 54-0.

The wrestling team competes next at home on Nov. 29th, as the Jackets host Doanne University at 7 p.m.