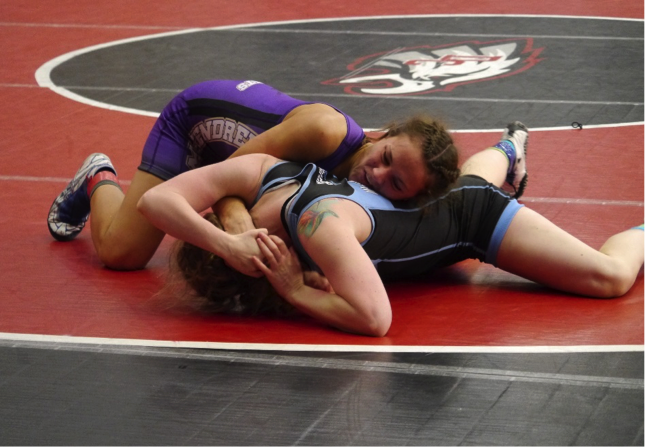 The majority of Iowa’s collegiate women wrestlers were back on the mats at the OCU Blue Chip Open in Oklahoma City with Iowa wrestlers taking 1st, 2nd, and 3rd place finishes to highlight the weekend.

Paige Bendt of Glenwood, a 116 pound freshman for Midland University (Fremont, NE) went 0-6 for the weekend. Bendt, who has been wrestling for a little under a year has shown incredible promise in her early competition and continues to develop match by match. There is no greater test than at the college level and Bendt has stepped up to fill the 116 pound spot in the roster.

Megan Black of Batavia, wrestled in the 130 pound bracket as a redshirt junior for McKendree University (Lebanon, IL). Black, who is ranked #2 at 123 pounds in the Intermat/WCWA Preseason Rankings (September 27th), proved she is also a force at 130 going 6-0 for the weekend and securing the 130 pound championship. She went 3-0 to win her pool in day one of competition, tallying 3 pins over Asia Igafo of Wayland Baptist (Plainview, TX), Maria Elena Hernandez of Midland University, and Rachael Coleck of Warner Pacific (Portland, OR). On day two, Black went 3-0 again with a 13-2 tech fall over Brenda Cardenas of Lindenwood University (St. Louis, MO), a 10-0 tech fall over teammate Brianna Bogdan of McKendree, and a 10-0 tech fall over Carla Ponce of OCU in the finals. With the 130 pound tournament victory, Black continues her undefeated season at 9-0.

Megan Black of McKendree University sinking in the half-nelson.

Anna Poyner of New Hartford, a 136 pound junior for Missouri Valley College (Marshall, MO) went 5-3 in her debut for the season. Poyner secured three pins and two tech falls en route to her 11th place finish. Poyner started the tournament with a pair of pins over Melanie Corderro of Menlo College (Atherton, CA) and Sna’nice Jackson of Ottawa University (Ottawa, KS), followed by a 5-16 tech fall loss to Regina Bell of Warner Pacific and a 1-12 tech fall loss to #7 ranked Alyssa Batiste of Lyon College (Batesville, AR). To finish day one, Poyner won by 10-0 tech fall over Makayla Jackson of Emmanuel College (Franklin Springs, GA). On day two, Poyner won by 12-2 tech fall over Bailey McLaughlin of Waldorf University (Forest City, IA), lost by fall to Hailey Meyers of MacMurray College (Jacksonville, IL), and finished with a pin over Jenna Wilson of Ottawa.

Anna Poyner of Missouri Valley College working for the fall.

Jasmine Bailey of Iowa City, is a 143 pound junior for McKendree and is currently ranked #8 at 136 pounds. Bailey went 7-1 for the weekend, taking 3rd place with her only loss coming from #3 ranked teammate Olivia Seppinni who went on to win the 143 pound championship. Bailey went 5-0 on day one racking up 4 tech falls and a decision. Bailey started the day with a 10-0 tech fall over Elizabeth Bound of Lindenwood University (St. Louis, MO) followed by an 11-0 tech fall over Laken Brooks of Emmanuel, a 10-0 tech fall over teammate Shannon Henry of McKendree, an 11-0 tech fall over Marisol Arredondo of Ottawa, and an 8-2 decision over Heiley Garcia of OCU. On day two Bailey pinned Bethany Davis of Missouri Valley, lost a 0-6 decision to teammate Olivia Seppinni, and finished with a 10-0 tech fall win over 8th ranked Marina Briceno of Wayland Baptist to take 3rd place in the tournament. Bailey’s record now stands at 10-3 for the season.

Iowa’s own Waldorf University also took six wrestlers to the OCU Blue Chip Open last weekend. Waldorf is Iowa’s first and only college to have a women’s wrestling program and under the leadership of 4th year head coach Tyreece Gilder, the program continues to advance. This year Gilder is joined by assistant coach, Jessica Fresh. Fresh, a native of Knoxville was a 2014 graduate of Waldorf and a 3-time WCWA All-American wrestler for the Warriors as well as a 2012 Olympic Trials qualifier.

Per the Waldorf University Sports Information office: “I’m happy about the effort level, but we have adjustments to make,” Gilder said. “We have a couple of weeks to make them. Consistency is going to be key.”

Don’t forget to mark your calendars for The Agony In Ames All-Star event this Saturday. The majority of the matches will be top-tier high school wrestlers going head to head in an Iowa vs. Illinois dual. Taking part in the action, Iowan Nicole Watters, a junior at Ballard High School and USA Wrestling Folkstyle All-American will face USA Wrestling Freestyle (Fargo) runner up, Alexis Gomez of Illinois. The event will be held at Sports Iowa in Ames. There will be a social preceding the event from 4:30-5:30 and wrestling begins at 6:00 p.m.

All photos by Holly Watters