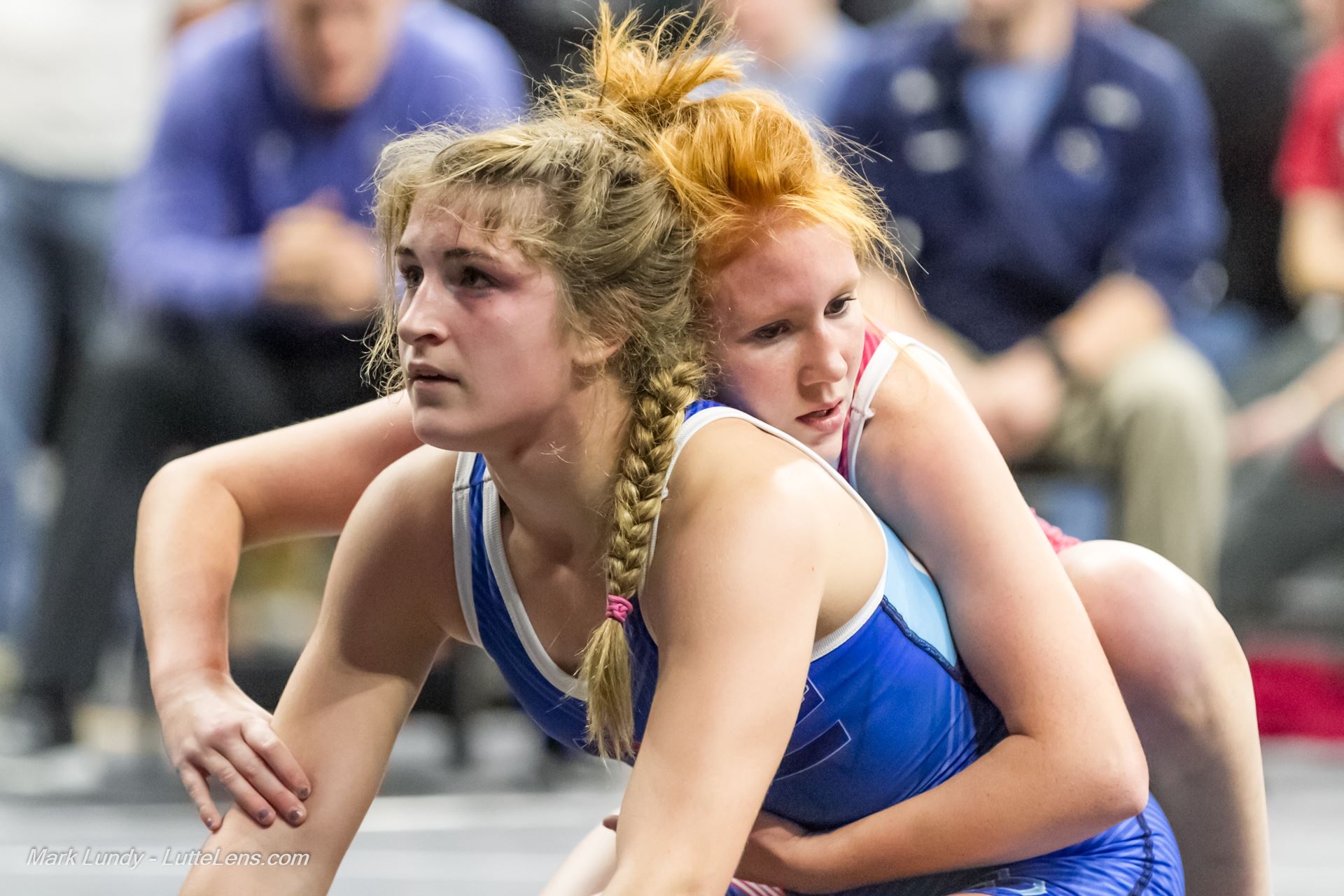 It’s another autumn in Iowa, the leaves are turning and wrestling is in full swing… for the women. At the collegiate level, schools with Iowa ties have already participated in several duals and an open tournament with another open tournament this coming weekend.

Girls wrestling is one of the fastest growing sports in the nation. According to the NWCA (National Wrestling Coaches Association) the ranks of female wrestlers has grown nationally from 783 in 1994 to 13,496 in 2016. There are 1,941 teams across the country with female wrestlers (NWCA Female Participation Numbers). State sanctioned female wrestling has grown to 6 states (Alaska, California, Hawaii, Tennessee, Texas, and Washington), 1 U.S. Protectorate (Guam), as well as New York City.

The pre-season opened Friday night with a 126 pound matchup at the Night of Conflict 2 between Iowan Alanah Vetterick and Ronna Heaton of South Dakota.

Heaton, a senior from Brookings, SD came into the competition with an impressive resume’ of National and World Championships which included the 2015 UWW Cadet World Gold Medal (49kg) and most-recently the 2016 UWW Cadet World Silver Medal (52kg). Vetterick, a junior at Norwalk High School, is not only a 3-time USA Wrestling Girls Folkstyle Nationals Runner-up (2014, 2015, 2016) at the Cadet and Junior levels but also a 2016 USA Wrestling Freestyle Junior All-American (Fargo).

Heaton won the match in a hard-fought battle that remained scoreless through the 1st period. Heaton scored an escape at the start the 2nd followed by a takedown and near fall to end the 2nd period leading 6-0. In the 3rd, Vetterick chose to start neutral and Heaton scored a takedown in the final 13 seconds to end the match 8-0.

Wrestlers from throughout the country battled it out Saturday with a record-setting 154 female participants at the Conflict at Carver. Some notable high-school performances from Iowans at the tournament included:

If that wasn’t enough wrestling for the weekend, Sunday ushered in the Midwest Mat of Dreams preseason dual at Pleasant Valley High School in Bettendorf. The dual event, put on by Female Elite Wrestling welcomed 180 wrestlers from nine states. Ciana Sonberg, a junior from Charles City secured 3 falls and an 11-8 decision over 154 pound, USA Wrestling Cadet Freestyle National Champion (Fargo) (2016), Hannah Ramos on her way to a 4-0 showing at 148 pounds.

It is also important to note that Team Iowa-Black took 1st place in the Youth Duals of the Midwest Mat of Dreams. Some incredible wrestling was showcased and it will be exciting to cover these athletes as they compete at the high school and college levels in the future.

There has been tremendous growth of women’s wrestling at the collegiate level. The 2016-2017 season has a record 31 schools participating in the WCWA (Women’s Collegiate Wrestling Association) at the NCAA Division II, Division III, NCJAA, and NAIA divisions. Never before has there been such an opportunity for young women to earn scholarships to compete in the sport that they love and earn a college degree in the process. In addition, we are on the cusp of seeing women’s wrestling officially sanctioned by the NCAA as an emerging sport at the Division I level. It is predicted that within the next 1-2 years that dream will be a reality.

The 2016-2017 season will see the following Iowans competing in college programs:

Cassy Herkelman of Cedar Falls, Junior McKendree University, Lebanon, IL will be taking a redshirt this season as she continues to heal from her recent knee surgery.

Jasmine Bailey, 143 pounds, is ranked #8 at 136 pounds in the Intermat/WCWA Preseason Rankings (September 27th) and currently holds a 3-2 record for the season. In her first match of the year, Bailey secured a fall in 57 seconds over Mia Lion at 143 pounds during McKendree’s dual with Life University (Marietta, GA). At the Emmanuel College Women’s Open (Franklin Springs, GA), she picked up a 12-1 tech fall win over Anna Naylor of the University of the Cumberlands (Williamsburg, KY) and a fall over Anissa Mertin of Emmanuel College at 143 pounds. Bailey lost by fall to Hannah Jewell (ranked #3 at 136 pounds) of King University (Bristol, TN) and forfeited to fellow McKendree teammate Olivia Seppinni who is ranked #3 at 143 pounds.

Paige Bendt, 123 pounds, competed in the Lady Warrior Open (Midland University) in Fremont, NE and ended the day 0-2 with falls to Tiffany Juarez and Shania Magdaleno, both of Ottawa University (Ottawa, KS).

Megan Black, 130 pounds, has pinned her way to a 3-0 record in duals competition to start the season. Black is ranked #2 at 123 pounds and was the 123 pound runner-up at the 2016 WCWA (Women’s Collegiate Wrestling Association) National Championships. She has picked up falls over Brenda Cardenas of Lindenwood University (St. Charles, MO), Aysia Cortez of Life University, and Sadie Tacket of Emmanuel College.

Former Waldorf University All-American (2012), Veronica Goodale, 191 pounds, is back in action and has started her season off with a 2-1 record at the Lady Warrior Open. Goodale picked up a 10-4 decision over Darcie Manning-O’Brien of Missouri Baptist University (St. Louis, MO), and a 5-2 decision over Rachel Doolittle of Lindenwood-Belleville (Belleville, IL) before losing by fall to Tatiana Vazquez of Oklahoma City University.

The college women will be back on the mats Friday and Saturday to compete in the OCU Blue Chip Women’s Open in Oklahoma City. We will be providing live tweets with updates on our Iowa wrestlers throughout the tournament. Be sure to follow us on Twitter @watters_ia and @IAwrestle.

There will be another excellent opportunity to see one of Iowa’s female wrestlers take to the mats at The Agony In Ames  event to be held at Sports Iowa in Ames.  The majority of the matches will be top-tier high school wrestlers going head to head in an Iowa vs. Illinois dual. Taking part in the action, Iowan Nicole Watters, a junior at Ballard High School and USA Wrestling Folkstyle All-American will face USA Wrestling Freestyle (Fargo) runner up, Alexis Gomez of Illinois.