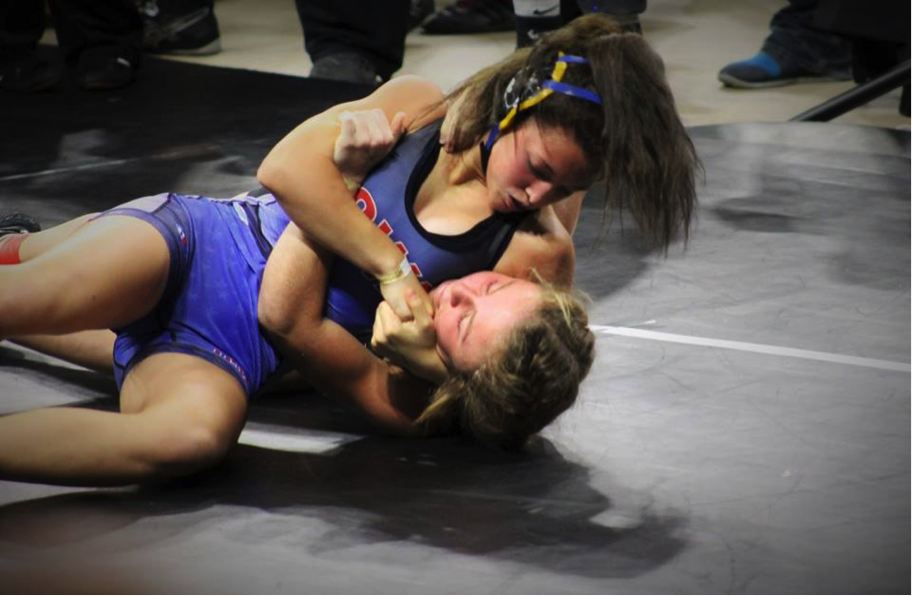 With the college season well underway it was exciting to review the WCWA/Intermat rankings that were released earlier this week. Several of Iowa’s own have earned their spots in the rankings and are included later in this update. As women’s wrestling continues its rapid growth, Iowa’s high school wrestlers have also had several opportunities over the past two weekends to compete in preseason Folkstyle national tournaments. Not only did they have great opportunities to compete, but they came away with some impressive results.

Chloe Clemons, a freshman from Center Point, went 2-2 at 117 pounds to take 3rd.

Tateum Park, a freshman from Davenport North went 2-2 to take 4th at 112 pounds.

Watters led 2-2 on criteria after the 1st period but gave up two takedowns in the 2nd to end with a 2-6 loss.

At the catch weight of 112-117, Tateum Park of Davenport North High School posted a solid 3-0 performance to take 1st place while Chloe Clemons of Center Point went 2-1 to secure 2nd.

Donny Bradburn, a freshman from Dubuque, battled through the bracket to a 4-1 finish to take 2nd at 130 pounds while Kaia Graham, a sophomore from Oskaloosa, went 3-2 to secure 3rd at the same weight.

It will be exciting to watch these young athletes move into the high school programs and add to the continued growth of wrestling in our state.

The most recent WCWA (Women’s Collegiate Wrestling Association)/Intermat rankings were released this week and include three of Iowa’s own:

Megan Black of Batavia, a redshirt junior for McKendree University (Lebanon, IL) is ranked #2 at 130 pounds.

Jasmine Bailey of Iowa City, is a 143 pound junior for McKendree and is currently ranked #6.

Rachel Watters of Ankeny is a freshman for Oklahoma City University and is ranked #4 at 155 pounds.

Since our last update we have had several Iowa wrestlers in action at the collegiate level.

Anna Poyner of New Hartford, a 136 pound junior for Missouri Valley College (Marshall, MO) went 3-2 to take 5th place in the Can/Am Open at the University of Jamestown (Jamestown, ND), November 5th. Poyner lost by fall in her first match of the day to Alisha Kaegi of the University of Winnipeg then followed it up with a pin over Jenna Wilson of Ottawa University (Ottawa, KS). Poyner lost a close 3-4 decision to Cara Romeike of the University of Jamestown followed by a pin over Victoria Lyons of Waldorf University (Forest City, IA) and a 10-0 tech fall over teammate Bethany Davis. Poyner also took to the mat in dual competition with a 2-12 tech fall loss to Alexia Ward of McKendree University. Poyner improved her record to 8-6 for the season.

Megan Black picked up a pin over Alicia Reyes of Missouri Valley in dual competition to bolster her undefeated season to 10-0.

Jasmine Bailey took a loss by fall in dual competition to Montana Drum of Missouri Baptist (St. Louis, MO) moving her record to 10-4 for the season.

Veronica Goodale of Cedar Falls, a 191 pound senior from Lindenwood University-Belleville went 0-2 at the MacMurray Open (Jacksonville, IL) on November 5th. Goodale opened with a 2-13 tech fall loss to Rebecca Carson of Campbellsville University (Campbellsville, KY) followed by a 1-3 loss by decision to teammate Rachel Doolittle. Goodale’s record stands at 2-3 for the season.

Iowa’s own Waldorf University was hard at work at the Can/Am Open in Jamestown, North Dakota.

Per the Waldorf University Sports Information office: “It was a solid effort all around,” Waldorf coach Tyreece Gilder said. “I think a lot of the ladies are starting to find their offense.”

Don’t forget to mark your calendars for the South Dakota State University women’s wrestling camp June 11-17 at SDSU in Brookings, SD. The camp will be run by USA Wrestling women’s head coach, Terry Steiner and SDSU head coach Chris Bono. More details will come as we get closer, but this is a good one to get on the calendar.