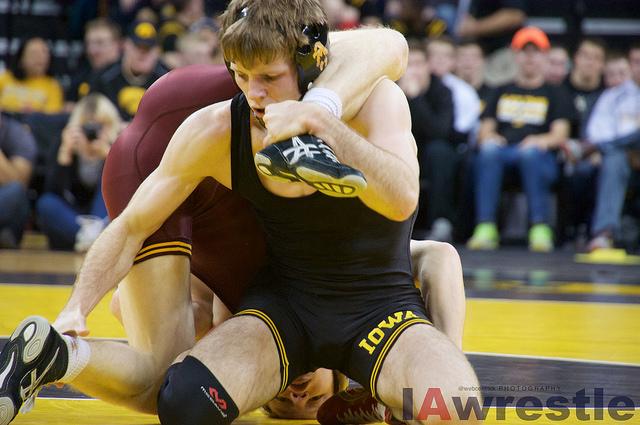 Wrestling media site Flowrestling continues to unveil their preseason college rankings and for the second straight day the University of Iowa has placed a wrestler at the top. Two-time NCAA finalist Cory Clark was given the top honor. Clark has been a force since moving into this weight class following a fifth place finish as a freshman at 125 pounds. Clark will have a brutal schedule having to wrestle seven of the other nine top ten ranked opponents in the dual season alone.

The Big Ten has a heavy presence in the top five with Clark joined by Nathan Tomasello of Ohio State (No. 2), Zane Richards of Illinois (No. 3), and Eric Montoya of Nebraska (No. 4). The Big Ten conference also has Michigan’s Stevan Micic (No. 8), Penn State’s Jared Cortez (No. 9), Rutgers Scott Delecchio (No. 11), and Michigan State’s Austin Eicher (No.17).

Additionally, we see Iowa State Cyclone Earl Hall making the rankings as a top five wrestler (No. 5). Hall figures to be a major asset for the Cyclones since learning the NCAA would be granting him another season of eligibility. The Big 12 conference will be no push over either with SDSU’s Seth Gross (No. 6) and Oklahoma State’s Kaid Brock (No. 7) nipping at Hall’s heels in the rankings.

Finally we see sophomore UNI standout Josh Alber also show in the rankings at No. 16. Alber was a Midlands finalist for Schwab last season and is the start of a wave of young talent looking to enter the Panther lineup. As far as ranked MAC opponents we see Ohio’s Cameron Kelly (No.12) and Missouri’s Jaydin Eierman (No. 13) ahead of Alber, and Central Michigans Corey Keener (No. 19) a few spots below.

One thought on “Cory Clark is Hawkeyes’ second preseason No. 1”