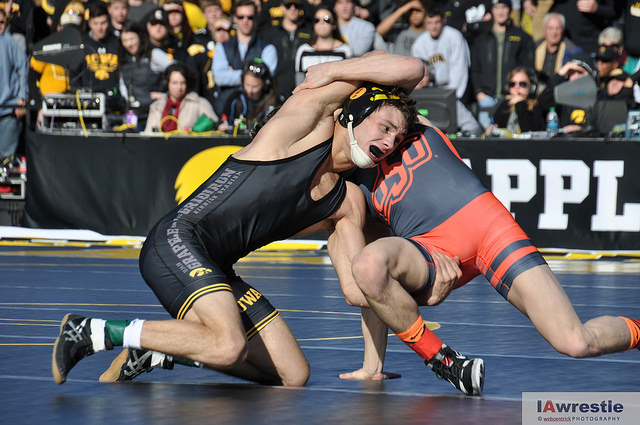 It doesn’t come as much of a surprise, but University of Iowa wrestler Thomas Gilman has earned Flowrestling’s No. 1 ranking in their preseason release. A two-time All-American for the Hawkeyes, Gilman was the 2016 NCAA runner-up and the highest returning wrestler at the weight. He was also the highest scoring individual at 125 pounds from the 2016 NCAA tournament.

What may surprise you is who is sitting in the No. 2 spot, which is none other than Northern Iowa’s two-time NCAA All-American Dylan Peters. An All-American as a freshman, Peters had to battle through injuries during his junior season to return to the stand earning a sixth place finish.

Peters will have an opportunity to test his ranking early, when the Panthers host Virginia Tech on November 18th in West Gym. Peters will face off with the Hokie’s No. 3 ranked wrestler, Joey Dance, who has defeated Peters in all three of their head-to-head’s.

Nebraska’s Tim Lambert (No. 10), Minnesota’s Ethan Lizak (No. 11), and Indiana’s Elijah Oliver (No. 17) round out all of Gilman’s conference competition in the rankings. Missouri’s Barlow McGee (No. 7) and Old Dominion’s Brandon Jeske (No. 20) are the only other MAC conference wrestlers that Peters will face.