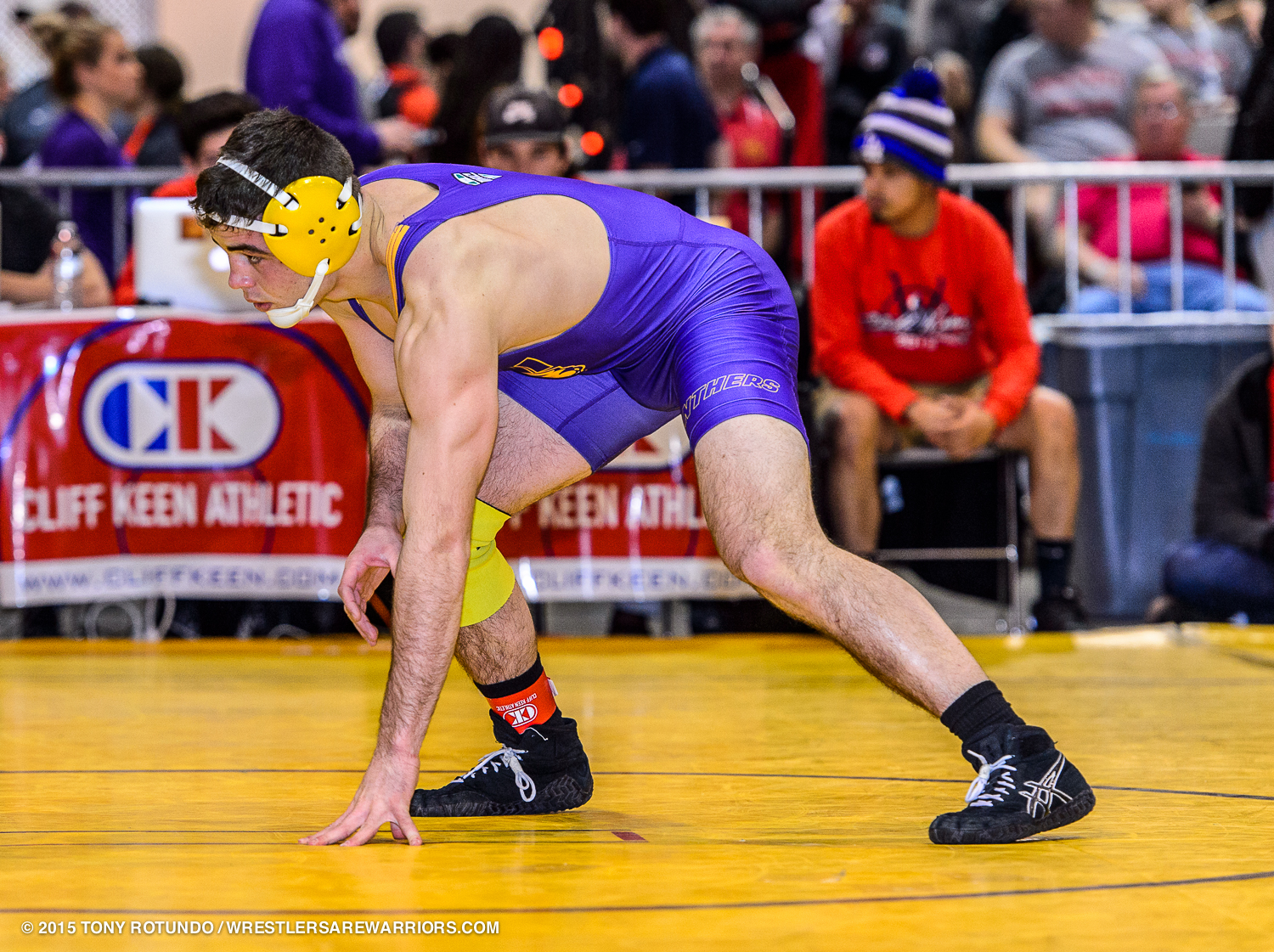 IAwrestle began covering wrestling in the state of Iowa shortly after the 2014 NCAA tournament concluded. Since then we have provided, in our opinion, some of the best wrestling coverage the state of Iowa has to offer. Going back to our first full year our very first recruiting class ever covered was the 2015 class, which produced several wrestlers that would finish as top 30 recruits in the nation.
The class was loaded with talent and as a tribute to the very first class we ever covered, we decided to start a mini-series of native Iowans who are looking to enter the starting lineups for their college teams. Most (but not all) are coming off redshirts, meaning their varsity clock has just begun. Let’s take a look at which wrestlers from the class of 2015 just may be in their school’s Division I starting lineup.

One of two wrestlers from the class of 2015 that wrestled in the postseason, Hellickson took his lumps for sure putting up a 16-10 record, but there were also bright moments like taking fourth at a tough Franklin & Marshall Open and he was also the recipient of Harvard’s Most Promising Freshman Award. Hellickson finished the year going 0-2 at the EIWA conference championships including a tough 9-8 first round loss to Penn’s Jeremy Schwartz, a wrestler Hellickson had beaten just a month prior.

Heading into this year Hellickson holds the most experience for the 125 pounders, so should continue to see the starting lineup. It’s a rare thing when true freshmen are able to break through at this level, so Hellickson’s results went pretty much as expected. With a whole year of wrestling in a Division I wrestling room (and starting experience to boot) hopefully Hellickson takes a step forward in 2016-17.

Former Waverly-Shell Rock standout Bryce Steiert was the other Iowan from the class of 2015 that started as a true freshman and it’s pretty safe to say he got off to a good start. Becoming the first true freshman to start under Doug Schwab, Steiert rewarded him by putting in a solid season that saw him go 24-11, reach the MAC conference finals, and go 3-2 at the NCAA tournament.

Steiert was definitely a late bloomer in the class of 2015, but he ended his high school career as a top 30 recruit for the Panthers. As long as he is healthy, I don’t think there is any question that Steiert is the top option at this weight for UNI, and after working his way into the top 20 rankings in his first year, it will be interesting to watch how far he can climb this season.

Even with Steiert performing as well as he did (and make no mistake he was great) it was Max Thomsen as the guy everyone has been buzzing about. Thomsen came up through the high school rankings to be a top five guy at his weight, but his Super 32 finals appearance coupled with his Keith Young victory over Fredy Stroker put the former Union high school prep #2 from there on out. Thomsen would later defeat the #1 ranked wrestler, Michael Kemerer now at Iowa, at the Iowa Dream Team classic to cement him as a top 15 overall recruit.

Because of all that, Thomsen comes into this season as steeped with expectations following a solid redshirt season. Going 17-4, half of Thomsen’s losses were to NCAA All-Americans, one was to Kemerer, and the final was to Rutgers veteran Ken Theobold, who decided to take a redshirt between his junior and senior seasons. The Panthers have been looking for an answer at the 149-pound spot and Thomsen appears to be the perfect fit. Like Steiert, there is no reason to think that Thomsen won’t work his way into the top 20 rankings quickly.

If you read this article yesterday, you might be wondering why Stroker has suddenly been upgraded from a medium to a high probability of starting in 2016-17. Well the answer is this: when the article was written, we operated under a certain assumption based off information we had. Since it was published, new information has been brought forward and we felt it warranted an update.

The new information we received is that two year veteran Jake Short, who is starting his junior season for the Gophers, will in fact be heading up to 157 pounds. Additionally, senior Brandon Kingsley along with redshirt freshman Larry Early will move up to 165 pounds for Minnesota, opening room at 149 for Fredy Stroker to make his Gopher debut.

This is obviously good news for Stroker, who was considered Iowa’s top recruit in the 2015 class for most of his high school career. As we stated in our first version of this story, we know he has the talent to exceed at the Division I level, and now with his in-room competition moving up in weight he will definitely be ready for prime time. After a 25-4 redshirt season expectations will be high, but like Thomsen, he shouldn’t need much time to work his way into the top 20 rankings.

With the graduation of Nathan Burak, the Hawkeyes will be looking for someone to step in and try to fill the hole left by the three-time All-American. Based off the roster, it looks like former Mediapolis standout, Steven Holloway will be that guy.

Holloway had a rough season at a weight that is pretty tough for freshmen to break into traditionally. Holloway was 16-7 during his redshirt season and didn’t win any discernable big matches that will indicate a successful season. His biggest concern has always been his gas tank and whether or not he will be able to finish matches out. After a year of working with the Iowa coaching staff we will see what kind of improvements Holloway has made.

*An interesting note for Holloway may begin the season up at 285 while current heavyweight, Sam Stoll recovers from a knee injury suffered at the National Duals last February. Iowa currently has no other heavyweight on the roster, but Brands could also opt to just forfeit the weight to give Holloway experience at the weight they will need him out during the postseason.

The last Iowan with the greatest probability of starting is former North Scott prep Eaton, who looks to take over the Bison’s 197 spot in 2016-17, despite the fact that senior Logan Paxton has been in the program longer.

While it’s true Paxton did pin Eaton during last season, he did little to show that he will in fact be the front runner at 197 pounds for head coach Roger Kish, finishing the year 6-19. Eaton on the other hand finished his redshirt season 18-7 and avenged his loss to Paxton 7-4 two weeks following his loss to the upperclassman. Eaton will still have his work cut out trying to establish himself at this weight-class, but he does appear to be North Dakota State’s best option in the room.

Former Johnston prep Pohlmeyer is definitely on the upper end of this “medium probability” as he will move up a weight-class from 133 to fill the 141 spot that was manned by Seth Gross in 2016. After just missing the podium last season, Gross decided that he would be dropping down to 133 stating that his cut to 60 kg for the Junior World Championships wasn’t too hard. That coupled with conversations that Pohlmeyer has been a potential 141 project prior to that announcement from Gross and you have a good outlook for the Iowa native to make the lineup.

Pohlmeyer was 16-5 on his redshirt campaign and while all of his results came at 133 pounds, his in-room competition looks to be Isaac (Zeke) Andrade, who has spent his entire career at 125 pounds for the Jackrabbits. While it’s not impossible for Andrade to be successful at 141, he will be jumping up two weights, which should give Pohlmeyer the size advantage. Pohlmeyer’s chances at starting appear to be pretty solid, though the uncertainty of how Andrade will perform when able to add some weight will be the only concern.

Of all the wrestlers on this list, Holschlag was the toughest to pin down on where he will fit into UNI’s lineup plans. For starters it looks like Taylor Lujan will be the favorite for the 174-pound spot, and yes, Holschalg did defeat Lujan in last year’s wrestle offs, but Lujan’s season was considered more successful than Holschlag’s. What is clear is that both 174 and 184 appear to be spots where an incoming freshman is more than capable of taking this starting spot.

For what we are hearing it sounds like two-time JUCO NCAA champion Tyler Hoffman fits into UNI’s 197 pound plans as opposed to their 184 plans. It also sounds like even if Hoffman is at 184, a redshirt is likely for the coming season. That means Holschlag (or Lujan) have the potential to be some sort of combination of starting at 174/184 for the Panthers.

Like Holschlag, Straw’s potential entrance on the lineup is a bit unknown, a large part has to do with which weight he’ll slot into. He’s listed at 149 for the Cyclones, which is a spot that has been manned by Gabe Moreno and Dante Rodrgiuez (when Moreno needed season ending surgery) the past two post seasons. Further it sounds like former top five recruit John Meeks is also considering moving to the 149 weight-class making Straw’s chances that much more uncertain.

The other option for Straw is to go up to 157, which is where he wrestled for the start of last season before moving up to 165 where he spent the majority of the year. His in-room competition there would be Renaldo Rodriguez-Spencer or Logan Breitenbach (who may also move to 165 with the departure of Weatherman). As you can see there is comparatively less talent up at 157, where the returning starter isn’t quite as established as the potential 149 starters.

The Rest of the top 10 not mentioned above:

It looks like Schwarm will have to wait a year before he gets his chance in the UNI starting lineup. Currently the 125-pound spot is occupied by two-time All-American Dylan Peters, who figures to enter the season in the top five rankings. Peters has had some unfortunate luck with injuries in his career, so while we hope for the best, Schwarm along with junior Leighton Gaul will need to be ready in case the need were to arise.

Patton was one of those wrestlers that brings a lot of potential to the table, but just needed to focus on the sport full-time to harness that ability. Unfortunately he will most likely be blocked in the lineup, with 165 featuring three-year starter Cooper Moore, and 174 is expected to be occupied by Georgia redshirt freshman Taylor Lujan.

It looks like Wilcke will be the odd man out with the Hawkeyes returning senior All-American Sammy Brooks at 184 which is where Wilcke’s future is as a Division I wrestler. He could try and bump up to 197 an challenge fellow freshman Steven Holloway for that spot, but size will be a concern when it comes to the upper-tier of competition. Still, the future looks bright for Wilcke, and hopefully he is rewarded with some starts this season to prepare him for 2017-18.

Racer is no longer enrolled at Virginia Tech or any other Division I school at this time.