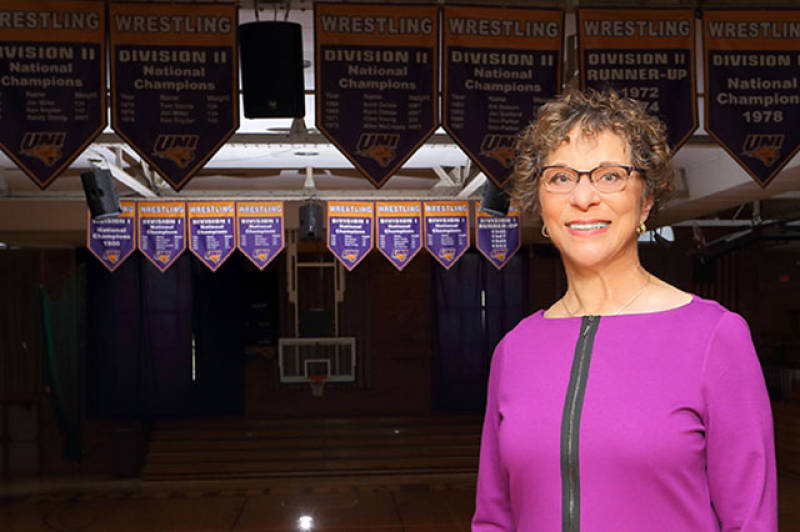 The University of Northern Iowa Department of Athletics will induct six individuals and the 1982 Panther softball team into its 2016 Athletics Hall of Fame Class.

This year’s class will be inducted in a ceremony on Sat., Sept. 10. The ceremony will take place at 10 a.m. in the McLeod Center. Later that day, the UNI football team will play its home opener of the 2016 season against Montana in the UNI-Dome at 4 p.m. RICH POWERS – WRESTLING, 1988-1992
Rich Powers finished his Panther wrestling career tied for the most wins in school history with 134 and was a three-time NCAA Division I All-American. Powers, a native of Harvard, Ill., put together a career mark of 134-25-1 from 1988 through 1992. Powers also notched 54 career falls to rank third on UNI’s all-time pins list – trailing only Kirk Myers (61) and Justin Greenlee (57). In his freshman season, he earned a spot on the Amateur Wrestling News’ Freshman All-America team. Powers went 25-9-1 in the 1988-89 season, which included seven wins by fall and five by technical fall. He won his first NCAA West Regional title and advanced to the NCAA Tournament as the No. 11 seed in the 177-pound weight class. Powers earned his first All-America honor as a sophomore with a fifth-place finish in the 177-pound bracket. Powers entered the 1990 NCAA Championships as the No. 6 seed in College Park, Md. He won his first match but dropped his second before righting the ship and producing four straight wins to clinch his first All-America honor. He was ranked in the top-10 throughout the entire season. He notched a team-best 18 pins, which is the fourth-highest single-season total in program history. Powers came back in 1991 as a junior with an overall mark of 44-4 and took fourth place in the NCAA’s 177-pound weight class. His 44 wins are tied for the second-most in a single-season in UNI’s history. He won his third consecutive NCAA West Regional title and was named the regional’s Outstanding Wrestler. Powers entered the 1991 NCAA Championship meet seeded No. 2 in his weight class in Iowa City. Powers would reach the semifinals after winning his first four matches of the tournament. Powers defeated Iowa State’s Matt Johnson in the NWCA All-Star Meet, 4-2. Powers spent the first half of his junior season ranked No. 1 in the nation at 177 pounds. Powers completed his senior season with a mark of 29-4 and another fifth-place tally in the 177-pound bracket. Powers entered the 1992 NCAA Championship in Oklahoma City, Okla., seeded No. 1. Powers again reached the national semifinals before dropping a decision. Powers fought his way back in the back draw and notched a fall in 1:33 in his final collegiate match against No. 10-seeded Steve Williams (North Carolina State) in the fifth-place match. Powers is one of nine UNI wrestlers to be a three-time NCAA Division I All-American. He won his fourth consecutive NCAA West Regional title, and was named the Outstanding Wrestler for the second straight year. He recorded 19 falls as a senior to rank as the third-highest single-season total in UNI history. SANDY STEVENS – DR. JITU D. KOTHARI MERITORIOUS SERVICE AWARD
Sandy Stevens is one of the top ambassadors for the sport of wrestling. She is recognized globally as the voice of wrestling, but she has never forgotten her UNI roots. Stevens earned her bachelor of arts in English teaching from the State College of Iowa. She and her late husband, Bob “Bear” Stevens, moved to Cedar Rapids after earning their collegiate degrees. Bear was beginning his job as the first wrestling coach at Cedar Rapids Kennedy High School and the night before a meet he realized he needed an announcer. He asked Sandy if she would do it and she has not looked back. Nearly a half century has passed since that night in Cedar Rapids and Sandy has enjoyed every stop along the way including announcing the NCAA Division I Championships for 34 years, multiple world championships, numerous independent and high school tournaments along with a pair of Olympic games (1984 – Los Angeles; 1996 – Atlanta). Sandy started the “Pledges for Pins” initiative at UNI in the fall of 2007. The program has generated more than $132,000 and has drawn wrestling support from 17 states. In the fall of 2015, Stevens helped create the Bear and Sandy Stevens Head Wrestling Coach Endowment at the University of Northern Iowa. Funds from this endowment will be used to support the salary of the UNI wrestling coach position. This isn’t the first time that Stevens has given back to UNI as she was the lead donor in the wrestling room renovation project in the West Gym and has endowed two wrestling scholarships. Stevens is a board member of both the UNI Foundation and the National Wrestling Hall of Fame. She continues to represent UNI in the Chicago area in a variety of capacities, including assisting UNI’s admissions counselors in recruiting Chicago-land residents to attend UNI.

One thought on “Rich Powers and Sandy Stevens inducted into UNI Hall of Fame Saturday.”