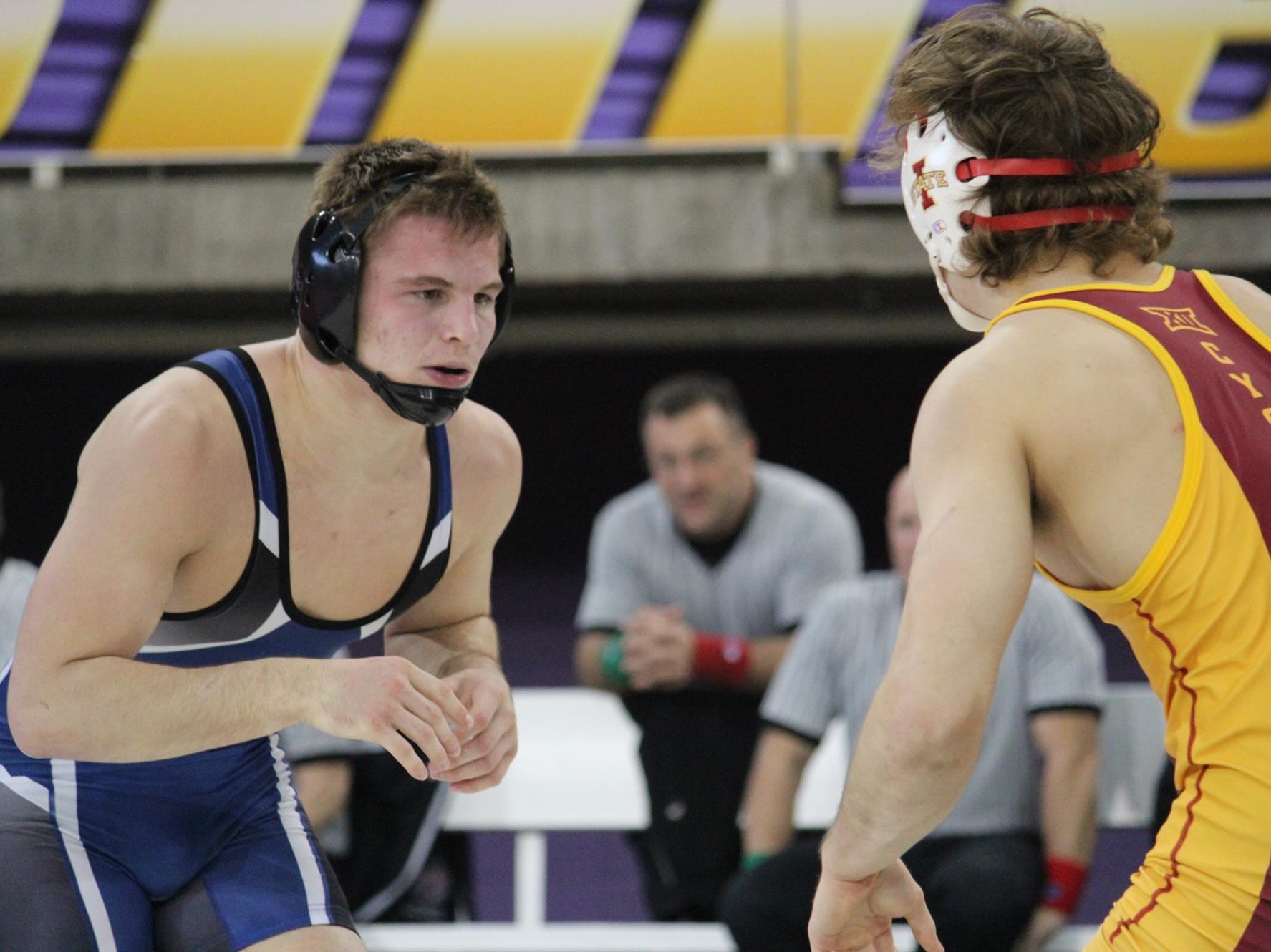 Doug Schwab has done a lot of good things for the Northern Iowa wrestling program, from energizing the donor base, shaping the team’s culture, to recruiting, Schwab has made steady improvements through the whole program.

The 2015 recruiting class has already been defined as a key moment in Doug Schwab’s coaching career, even before any of his wrestlers took to the college mat. That was because the recruiting class was a unanimous top five in terms of collective talent, and one of the best hauls in the school’s history. Schwab managed to convince several top 30 recruits to come wrestle for him and some of that labor is already bearing fruit.

This past year Bryce Steiert from Waverly-Shell Rock became the first true freshman to start in the UNI lineup under coach Schwab, and he performed so well that he reached the MAC finals and he won three matches at the NCAA tournament.

For all of that Steiert has entered the known quantity phase. Spending time in the top 20 rankings and earning wins at the NCAA tournament, it’s plain to see the potential there. For all his credit, this notebook will examine his counterparts that did redshirt this season, and what we can come to expect from them.

Northern Iowa fans are excited about Max Thomsen, and for good reason. As a true freshman Thomsen came into the program as the top recruit in the class and from looking at the results, he remains the top talent. Thomsen finished the year with a 17-4 record, including going 3-2 out at the Midlands championships.

Of Thomsen’s record his biggest wins are probably a pair of 6-3 decisions he earned at the Midlands over NCAA qualifiers Clay Ream (North Dakota State) and Alex Kocer (South Dakota State). Thomsen picked up two big victories over Iowa State wrestler Blayne Briceno, who was a University Nationals All-American in 2015.

In the loss column there is not too much to get upset about. Thomsen’s first two losses came at the Harold Nichols Open in Ames where he lost to eventual All-American Geo Martinez (Boise State) and Iowa redshirt Michael Kemerer. Kemerer and Thomsen now have a four match history, with the former coming out on top in three of the meetings.

The other two losses were to former NCAA champion Jason Tsirtsis (Northwestern) and to two-time NCAA qualifier Ken Theobold (Rutgers), both at the Midlands championships.

Heading into next season Thomsen will be the runaway favorite in the room to win the 149-pound spot in the Panther lineup and looks to have All-American potential. Thomsen wrestles tough on top, which is one of the reasons he was able to finish his high school career a top the all-time pins leaderboard in the state of Iowa.

While Thomsen is viewed as the top guy coming off a redshirt, there are a lot of teams out there that would be happy if they had a talent such as Lujan being their #1 guy coming off redshirt for next year.

Despite a record that doesn’t contain any eye popping wins, Lujan took care of business this year going 12-4 at 174-pounds, and was one match away from placing at the Midlands as a true freshman. The biggest wins for Lujan this year are most likely his 8-6 decision over Iowa freshman Mitch Bowman, and the 17-8 major against Columbia senior Zack Hernandez (who notched several quality wins himself this year). The other note on Lujan is aside from his injury default, all of his losses were one point deficits to NCAA qualifiers.

Lujan came into UNI already a pretty savvy wrestler, competing at 182-pounds in Georgia and known for being able to wrestle with some funk. Lujan also has the benefit that his high school club coach, Lee Roper, is on the staff at UNI and has been helping develop him for years.

Predicting the success of young upper-weights is challenging, but there is plenty to like about Lujan. He is plenty proficient on his feet and can scramble with the best of them, but this weight does return six All-Americans and several more Round of 12 finishers.

There is plenty to like about Lujan, but he will need to battle with some tough wrestlers just to earn the spot in his own room.

While the trend in the past is for these posts to be specifically about true freshmen coming off redshirts, UNI has a unique situation where they have a senior coming off a redshirt, and given his potential impact he definitely needs to be discussed.

Coming out of this season UNI knew they would be facing a huge blow to their lineup with heavyweight Blaize Cabell entering his final year of eligibility. Lucky for UNI, they were able to pick up the addition of former South Dakota State wrestler JJ Everard, who was a NCAA qualifier in 2015.

This season Everard didn’t face a lot of elite competition, though he did defeat a couple of promising young guns Minnesot’a Rylee Streifel (twice) and Patrick Grayson of Nebraska. Everard also defeated Arizona State backup Chance Eskam at the 2015 Midlands.

The biggest takeaway of Everard’s redshirt season is that the Panthers will get a solid veteran commodity to step into the lineup to replace three-time NCAA qualifier Cabell. Both Eastern Michigan’s Gage Hutchinson and returning MAC runner-up Jake Gunning of Buffalo return for next season, but Everard should be able to come in and compete for a MAC title.

If there is one thing you can point your finger to in this 2015 recruiting class, it’s the amount of depth that Dough Schwab was able to attain allowing him to go two-deep at a couple of weights. One of those weights will be 157-pounds where Paden Moore will look to enter the conversation with Bryce Steiert for competition for the starting spot.

The brother of three-time NCAA qualifier and current 165-pound starter Cooper Moore, Paden came into the program a top 100 recruit with plenty of potential. Unfortunately, Moore got a late start to the year, not getting his first competition under his belt until the first week of January, where he went 2-1.

The encouraging sign from Moore was that his first loss of the season was to Iowa’s Logan Thompson, who won 9-5, but three weeks later Moore was able to avenge that loss 7-3. Moore also notched a win over Illinois wrestler Carver James, who was a top 100 recruit out of high school.

Above I mentioned that Lujan would need to battle through with some tough wrestlers in the room to earn the spot. Jacob Holschlag is one of those reasons that Lujan will not just be “given” the spot.

This past season Holschlag managed a 9-5 record at 174-pounds for Northern Iowa and while his high school credentials weren’t on the same level as Lujan’s, he has quickly shown that he has the talent to be a successful Division I wrestler of the same caliber.

Starting the season off Holschlag won the public wrestle off with Lujan in the West Gym 4-2 in sudden victory. During the season he didn’t face a ton of elite competition, but his 5-2 Midlands win over Oklahoma’s Matt Reed (then a top 20 ranked wrestler) was a bit of an eye opener displaying just how good he was this season. Holschlag would go on to finish one win shy of a top eight finish at the Midlands.

Holschlag came into the University of Northern Iowa an athlete. As a high school junior Holschlag was a standout football player for Union-LaPorte City before making the transition to wrestling full-time his senior season. It’s that athleticism that makes many believe he could be successful if he competes with Lujan for the 174-pound spot, or that he has the potential to move up and take over the 184-pound lineup spot.