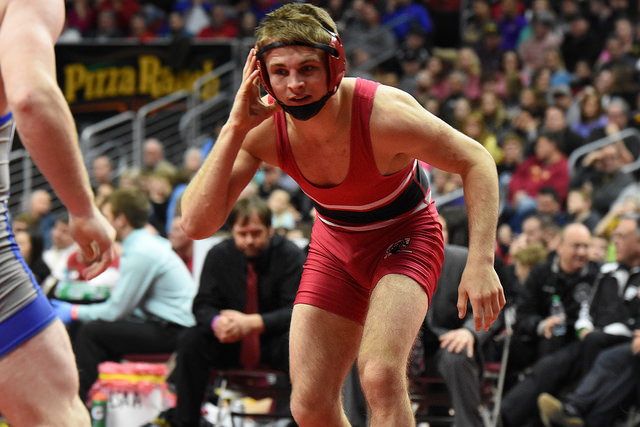 USA Today High School Sports released their All-USA high school wrestling teams and once again the state of Iowa was able to put a wrestler on the list. This year it was the four-time state champion Carter Happel out of Lisbon, Iowa.

Happel finishes his career as the 25th wrestler in Iowa history to win four state titles, and also has a couple of freestyle national titles to his name. In addition to being the #36 ranked wrestler overall in the 2016 class (InterMat), Happel is currently ranked #4 at 145-pounds by InterMat, and is ranked #8 by Flowrestling.

Several other wrestlers who will wrestle in the state of Iowa for their college careers also made the list. A pair of future Hawkeyes made the second team, with junior Justin Mejia (Clovis, Calf.) getting the nod at 120 and senior Alex Marinelli (St. Paris Graham, Ohio) selected at 170-pounds.

A year ago another four-time state champion, Max Thomsen of Union-La Porte City, made the second All-USA team also at 145-pounds. Thomsen currently competes at the University of Northern Iowa where he is expected to be one of the top wrestlers competing for the 149-pound spot on the roster.