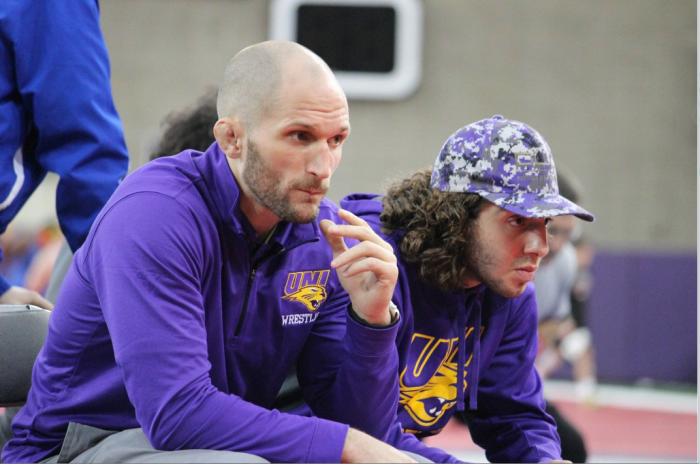 Per the University of Northern Iowa

“Lee brings a love for the sport of wrestling,” said head coach Doug Schwab. “When you have options of where to go, and this is where you want to be, that says something.”

Roper joined the UNI wrestling team as a volunteer coach in the 2015-16 season.

“Last year, he really proved himself as far as how valuable he is to the program,” Schwab said. “You know when guys fit well. We all get along well as a group, and we have all bought in to the program and believe in what we can do here at UNI.”

Roper is the co-founder of Compound Wrestling Facilities in McDonough, Georgia. From its inception in 2008 until the start of last season, the club had coached 13 wrestlers who advanced as Division I athletes, including former All-American for UNI Joey Lazor and current Panthers Jake Hodges and Taylor Lujan, a four-time state champion as a prep in Georgia.

“It’s just the right fit,” said Roper. “You see those billboards all around that say ‘UNI is the right fit,’ and it is for me, too. There are a lot of schools around us that offer the same thing, and this place is just different. When I was looking for a place that fit me, I wanted to find that family atmosphere where the head coach is completely invested in his student-athletes.”

Roper was a four-year starter at Appalachian State University from 2001-06 and an NCAA qualifier in 2003. He earned all-conference honors in 2002 and 2003. As a prep athlete, Roper was an All-American and two-time state champion from Madison, Georgia.

Each coach on staff plans to continue taking an active role in the academic affairs of the team, but Roper will be the point person to monitor the process.

“Everybody works really hard at wrestling at this level, and we are trying to win a national championship as a team,” Roper said. “However, we are trying to pinpoint all aspects of their life. We all stress academics a lot. It’s something that maybe other places don’t stress as much, but if we get their lifestyle in order and they are handling their academics, wrestling starts getting pretty easy.”

Roper fills a vacancy created when assistant head coach Mark Schwab stepped out of coaching to start his own company at the end of the last season.

“We’ll never be able to replace Mark, but you try to find a guy who complements your lesser strengths,” said Doug Schwab. “As far as planning, technique, skill and passion for the sport, Lee has just as much as anyone. So we are excited to add him on full time and excited to put Brett Robbins on our staff.”

Robbins will move into the volunteer coach role.

In his senior year at UNI, Robbins bounced back after a long battle with a medical hardship to win the Loras and Jim Fox opens and go undefeated in dual matches. He posted a 19-5 record, and graduated from UNI in 2010 with a degree in history.

He was still competing at 66 kilograms until recently and placed eighth at the 2013 U.S. Open.

Robbins is a native of Bloomington, Illinois. He is engaged to be married to Holli Rutherford next month.

“These are the guys who need to be on staff to move our program forward,” said Schwab. “It will be a seamless transition. We have had very little turnover since my start seven years ago. They have built relationships with these guys, and that’s important.”

LOOKING AHEAD TO 2016-17
UNI will be led by two-time All-American Dylan Peters.

The Panthers will have five returning Division I NCAA qualifiers on the roster. In addition to Peters, Cooper Moore will enter his senior year as a three-time qualifier. He will be joined by sophomores Josh Alber and Bryce Steiert. Senior JJ Everard transferred from South Dakota State and sat out the 2015-16 season. The heavyweight qualified for the 2014 NCAA tournament at SDSU.

UNI will open its home dual season Nov. 11. A full schedule will be released at a later date. The Panthers expect to have at least nine home events, including the Mid-American Conference championships March 4-5, 2017.

“The culture we have on the team is something I would put up with anyone in the country,” said Roper. “We just have a lot of guys who are fun to be around. They are trying to do some big things in their life, and they are buying into the lifestyle we are putting before them. They are making a lot of sacrifices in the offseason and the summer. We expect big things of them, and they expect big things of themselves, so when you get those two things in align, we know a lot of fun things are going to happen.”