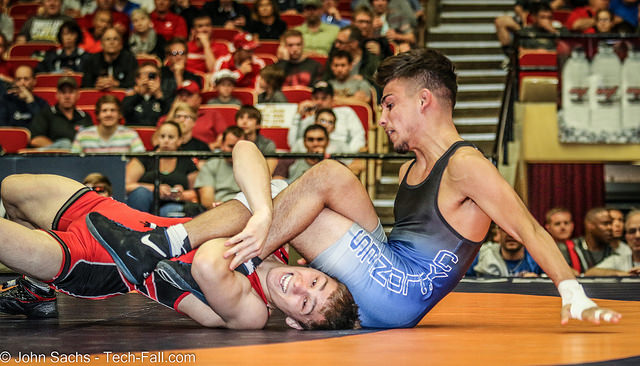 There is a saying about the rich getting richer, and today the Hawkeyes just got a little richer. That’s because they have landed the verbal commitments of Spencer Lee, one of the nation’s most coveted recruits, and Gavin Teasdale both of Pennsylvania.

After a long recruiting process I'm excited to say I will be joining my former FR teammate @Kem_Dawg65 at the university of Iowa. Go Hawks!

Lee is the nation’s #1 ranked Junior (class of 2017) and has been rated second across all wrestlers in all weight-classes in Flowrestling’s pound-for-pound rankings. While the fact that Lee has three Pennsylvania high school state titles under his belt, a large majority of Lee’s fame comes from his dominating performances on the World level at the freestyle World Championships. In 2014 Lee won the Cadet age World title, and last summer he won the Junior age level World Championship after receiving a waiver for being too young to technically compete. Lee is considered the favorite to repeat on the Junior level once again in 2016.

Teasdale is considered one the nation’s top sophomores (class of 2018), and is currently the #1 ranked wrestler at 113-pounds by Flowrestling. Teasdale is a two-time high school state champion for Jefferson-Morgan and like Lee has World Championships experience making the Cadet World team in both 2014 and 2015.

Just about every school in the country was after these two wrestlers, though Lee made it known through most of his recruiting process that it was a competition between Penn State, Iowa, and Ohio State.

As for the Hawkeyes getting richer, Lee joins three other verbal commitments for Tom Brands in the 2017 recruiting class. The first two commitments in the class were Jason Renteria (Illinois) and Justin Mejia (California), who like Lee all wrestled this past season at 120-pounds and all currently project at 125-pound college wrestlers.

In addition to the three lightweight commits, middle-weight Luke Troy (California) is the fourth top 50 recruit on board for the Hawkeyes’ 2017 class.

Teasdale is the first commitment to Iowa’s 2018 recruiting class, though many expect Teasdale to outgrow Lee by college.

Lee and Teasdale both come to the program with an Iowa tie. For starters Jody Strittmatter, their coach at the Young Guns Wrestling Club, wrestled for Iowa back in the early 2000’s before setting up his now famous wrestling club in Pennsylvania.

Lee was also have a familiar face when he gets to Iowa with Hawkeye true freshman Michael Kemerer a former high school teammate at Franklin Regional. Additionally Kaleb Young, a 2016 Iowa signee, is a former clubmate of Lee at Young Guns.