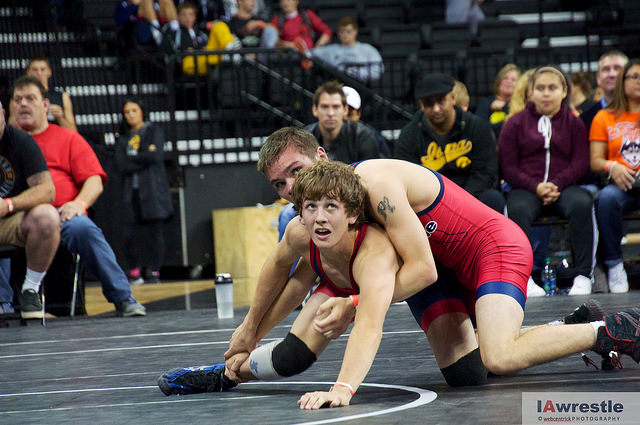 A pipeline may be in the process of being formed as Tom Brands taps into the Ohio high school powerhouse for the second time this year to land Justin Stickley of St. Paris Graham. Stickley, who is teammates with the nation’s #2 170 pound wrestler and Hawkeye commit Alex Marinelli, will give a nice boost to the Hawkeye lightweights.

“I picked Iowa for their tradition of being a great wrestling program.” Stickley said on his decision. “It’s always been a dream to go be a Hawkeye. When I got into high school I didn’t know if I would be able to do it, but then things just fell into place and I finally realized that’s a dream that can become a reality.”

“It’s definitely more comfortable having people you know where you are going to school,” Stickley said on joining his teammate Marinelli, “It feel nice as opposed to going to a place that’s foreign and you don’t know very many people.”

In 2015 Stickley wrestled a tough schedule, but managed it rather well taking fifth at the prestigious Ironman tournament and then second at the Ohio high school state championships at 106 pounds. After spending three years at the smallest weight class, Stickley bumped up and wrestled 120 pounds this season to finish runner-up for Graham. The move was beneficial for the team as they won their 16th (yes, 16) straight team state title.

Stickley was also a member of the IA Wrestle event Night of Conflict where he faced off against top Iowa senior Josh Portillo. Stickley won the match 3-0 in what may be his first of many wins inside Carver-Hawkeye Arena.

“I would like to thank my parents for getting me into the sport and always have to thank God for blessing me.”

Stickley joins California’s Justin Mejia and Illinois’s Jason Renteria in the class of 2017. For the entire list of committed Hawkeyes, you can visit this link.