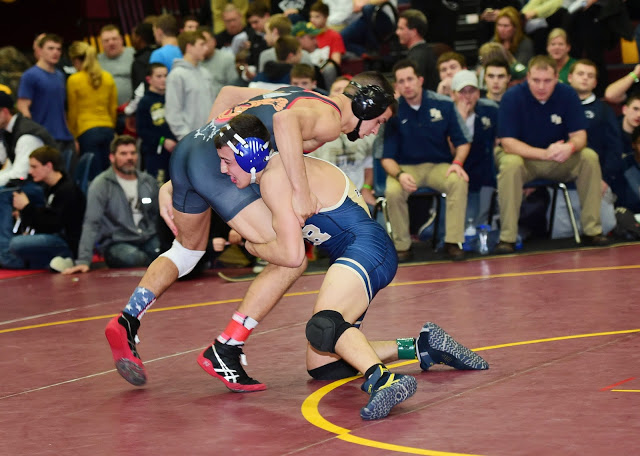 In 2010, the University of Iowa pulled in the #1 ranked recruiting class, headlined by several top 15 rated recruits, two of which went on to be three-time All-Americans under Tom Brands. The 2015 class was recruited to fill some off those holes left by that large class, with it’s headliner being Pennsylvania native Michael Kemerer out of Franklin Regional high school. Kemerer would be one of four top 100 recruits in his class, but so far his potential for impacting the lineup as a freshman appears to be the greatest. In this redshirt notebook we will take a look at the 2015 class, and try and determine which wrestlers could see themselves in the lineup.

As it was then, so it is now, but Michael Kemerer has continued his growth on the mat making his the top prize from 2015. Kemerer had a storied senior season in high school, winning his second Super 32 title in November, a PowerAde and Walsh Ironman title in December, before capping it all off with his first ever state title in March.

The success has followed him to Iowa City, with Kemerer winning every open he entered and the freshman also picked up a solid fifth place finish at the Midlands Championships notching several wins over former and eventual NCAA qualifiers. Kemerer’s bigger wins on the season came over former top 20 recruits Fredy Stroker (Minnesota) and Max Thomsen (UNI) at the Harold Nichols Open in November.

Kemerer has clearly identified himself as the top true freshman around his weight, but with his weight class currently occupied by NCAA runner-up Brandon Sorensen, we may see Kemerer attempt to grow into the 157-pound weight-class. Few see the weight slowing down Kemerer’s potential, with most fans and experts alike penciling him as the future starter for the Hawkeyes at that weight.

Additionally, Steven Holloway out of Mediapolis high school is the second wrestler from the 2015 who has a strong chance to enter the 2016-17 lineup for Iowa. A last minute addition to the 2015 class, Holloway looks to be the heir apparent at 197 with the graduation of three-time All-American Nathan Burak. Holloway is the lone wrestler on the current roster listed as a true 197-pound wrestler, though several wrestlers make try and seize the opportunity for themselves by bumping a weight.

Holloway closed the year with a 12-6 record with two of those losses coming to the national ranked South Dakota State wrestler, Nate Rotert, and two other losses coming to former Iowa prep Evan Hansen, who now competes for Grand View. There is some encouragement in one of Holloway’s losses to Rotert in the fact that the freshman went out and lost in a wild 11-9 match.

Holloway lacks the signature victory that would cement him as a known quantity, so for now we will have to rely on the  hope that working with Burak and upper-weight coach Ben Berhow will be enough to get Holloway ready for next season, who may need to do some learning on the job.

While Kemerer has received the lion’s share of praise out of this recruiting class, the potential of Vince Turk has been far from unnoticed. Early on into Turk’s career there were reports circulating that he had the potential to be the first true freshman to start under Brands. Something that got buried with the late season of senior Brody Grothus.

Still the 18-4 record was a strong debut for the 141-pound wrestler, with his marquee win most likely being over Jake Koethe (UNI) who appeared in the top 20 ranking at one point during the season, but he also notched a solid 10-8 decision over South Dakota State NCAA qualifier Seth Gross. To this point Turk’s ability to win has come from his offense on his feet, but he has struggled in the bottom and top positions.

Cash Wilcke was the first the first top 100 recruit to join the 2015 recruiting class, and the former Iowa prep standout finished his season with a 13-3 record, with all three of his losses coming to Division I competition.

The jury is still out on what type of potential Wilcke brings to the Iowa program. He notched two marquee wins on the season, a pair of decisions over Wisconsin top 2015 recruits Mason Reinhardt and Hunter Ritter, the latter holding more significance.

Looking over the lineup, Wilcke will be hard pressed to make the full-time lineup with All-American Sammy Brooks ahead of him currently at 184, but he could get some valuable experience in the backup role, before potentially taking over the spot in 2017-18. If that isn’t Wilcke’s plan, there is the chance that Wilcke bumps to 197 and battles with fellow freshman Holloway for the opening Nathan Burak leaves.

Choosing the last wrestler to highlight was rather tricky with this class, as there are about three other names to consider, but in the end I picked Gunther based on two factors: 1) He will be wrestling at a weight that currently lacks a favorite in the room for the spot, and 2) he beat teammate Jeremiah Moody on both occasions giving him the head-to-head there.

Gunther has certainly peaked quite a few interests this season, and may currently be the top wrestler competing with Burke Paddock for the spot next season.

In order to get a better look at what wrestler fans are looking forward to, we opened up the discussion on Twitter. With Kemerer’s true freshman season being a bit of an outlier, we structured the poll around the next three most impressive freshman (Turk, Wilcke, and Holloway). We received almost 600 votes, with Turk winning the poll and we recieved several good responses as well. Aaron Meyer, Keegan Shaw, and Paul Glynn were the wrestlers mentioned when selecting “other”.

Outside of Michael Kemerer, which Hawkeye true freshman are you most excited about and why?

Responses to the poll:

@RossIAWrestle None particularly, but Holloway is the only one who is likely to be a starter next year, IMO.

@RossIAWrestle I'm saying Turk just because I'm ready for someone to score some pts at that weight.