Brands and Hawkeyes look to grow from 2016 experience 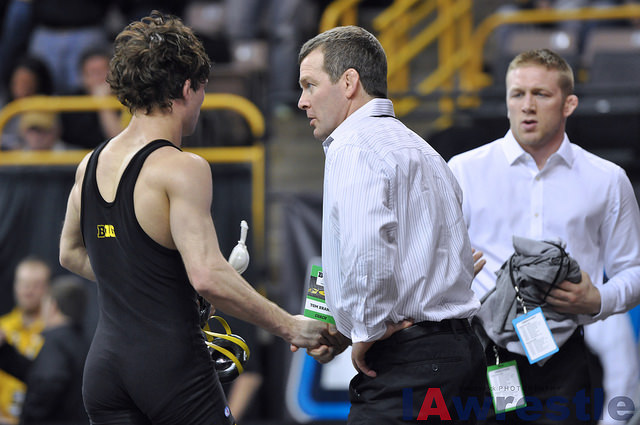 Wrapping up the 2015-16 season is not an easy thing to do if you are an Iowa Hawkeye, as the team finished a disappointing 1-6 on the final day of the NCAA tournament. The bumpy finish to the season included all six of Iowa’s All-Americans losing their final matches, with three of those losses coming in the finals.

After his wrestlers concluded their tournaments in Madison Square Garden, Iowa head coach Tom Brands spoke with the media and he described himself as feeling miserable for his wrestlers falling one match short of being national champions, and also added, “We are a long ways (from Penn State). And that doesn’t mean that this guy is giving up. But when you look at how they wrestle, when you look at the points they score, and I am not talking about only match points, I am talking about bonus points and how they add up, we are a long ways. It’s not light years, but we have to do some things that close the gap.”

One of the things that Brands noted that his 2016-17 squad will need to do to close that gap with Penn State is to score more match points and through that, more bonus points. Hawkeye fans don’t need to look much further than their 125-pound finalist to find someone who exemplifies what Brands is asking for.

Gilman finished the tournament as a runner-up at his weight, but also as the ninth highest point scorer as an individual (he actually scored a half point more than 125-pound champion Nico Megaludis of Penn State). Each Hawkeye will need to find their own style, but it’s clear that Iowa needs more Thomas Gilman’s, who ended his season with 83% of his wins coming by way of bonus.

There is a lot to be excited about for the following Iowa wrestling season, as Tom Brands will return five of his six NCAA All-Americans. Returning for their final seasons will be Gilman, two-time finalist Cory Clark (133), and the newest Hawkeye All-Americans Alex Meyer (174) and Sammy Brooks (184). Brandon Sorensen will return for his junior season after earning his second All-American honor by reaching the finals.

Starting the season, Edwin Cooper Jr. was considered to be one of many wrestlers in a battle for a spot in the lineup. While Cooper entered as the favorite to win the 157-pound weight, his season got off to a rocky start, before some December adjustments allowed the senior to flourish into a NCAA qualifier and optimism as high as a dark horse All-American. Cooper finished 1-2 at nationals, but with the strides he made went a long way in solidifying a question mark weight for the Hawkeyes.

You can’t have a 2015-16 season highlight post without mentioning Iowa’s Grapple on the Grid Iron event when 42,000 spectators showed up at Kinnick stadium to watch a wrestling dual and the product on the mat delivered. Not only did the Hawkeyes reclaim the attendance record for an individual event, but fans were also rewarded by seeing their team down the then #1 dual ranked team, the Oklahoma State Cowboys, in a come from behind fashion. The 42,000 Kinnick attendance also help propel the Hawkeyes to over 90,000 total fans on the season, which is almost 40,000 more than their 2015 total.

Perhaps one of the brightest moments on the 2015-16 Iowa Hawkeye team was redshirt freshman Sam Stoll, who emerged as a bonafide high caliber wrestler in his first season as a starter. After a 17-5 redshirt year, many wondered what to expect from the top recruit from the 2014 class, but those questions were quickly answered when Stoll started his career winning nine of ten, with his first two losses coming to All-Americans Austin Marsden of Oklahoma State and Nick Gwiazdowski of North Carolina State.

Stoll rose as high as the #7 in some rankings this season, but an injury at the National Duals most likely ended what could have been a truly special season for Stoll. He may not be an All-American, but with Stoll returning along with the five AAs crowned in New York, the Hawkeyes have six strong starters heading into next year.

After 2015, the Hawkeyes graduated five starters from their lineup, leaving key holes at several weights (141, 157, and 165). Some of those weights didn’t receive their answer as to who would be the post season starter until February.

Looking at this current team, four seniors will depart once again creating holes that Tom Brands will need to fill. The good news is that there does appear to be some young and willing wrestler that have put in an early bid for a few of those spots.

Currently redshirting, Michael Kemerer has flipped the switch from high school sensation to college standout. His first season saw him down several NCAA qualifiers, and was highlighted by a fifth place finish at the Midlands. Kemerer is a 149-pound wrestler by trade, but has the frame to potentially fill the 157-pound vacancy left by Edwin Cooper Jr..

A season of battling for a spot in the lineup should be viewed as a positive for Topher Carton, who will enter his senior season in the running for the 141-pound spot. Carton held the edge over freshman Logan Ryan to start the season, but the return of Brody Grothus bounced Carton to second on the 141 depth chart. Looking forward to 2016-17, Carton will battle with redshirt freshman Vince Turk to be the guy at this weight.

Similarly to Carton, Burke Paddock spent his redshirt freshman season battling Patrick Rhoads for the 165-pound spot, with the latter getting the postseason nod. Paddock took some lumps in 2016, but should be viewed as a potential favorite for the spot.

Brands has put together a well-respected 2016 recruiting class, which is headlined by three nationally ranked recruits.

Alex Marinelli (left) is the top wrestler, coming in a consensus #3 ranked wrestler in the entire class. Marinelli is a 160-pound high school wrestler by trade, but bumped to 170 to help his team. Hailing from the famous St. Paris Graham High School in Ohio, Marinelli brings a variety of leg attacks that many point to as what will allow him to be successful in college from day one. A potential dark horse challenge for the 165-pound spot, Marinelli should be a name Hawkeye fans get used to hearing.

The second big pickup for Brands was the local product, Carter Happel of Lisbon, Iowa who became his state’s 25th four-time state champion earlier this year. A Fargo and UWW (formerly known as FILA) Cadet national champion, Happel is expected to join the 141-pound race after a redshirt season.

The third biggest name in the class belongs to Punxsutawney’s Kaleb Young, who captured his first Pennsylvania state title a few weeks ago. Young was the first commitment to the Hawkeyes from the famous Young Guns club early in his junior season, and has only seen his stock rise since the commitment. Young was the 160-pound Super 32 champion in 2015 and is currently ranked #2 at 160 by most sites. Young is noted for his long frame and is expected to be a future 165/174 contender for the Hawkeye lineup.