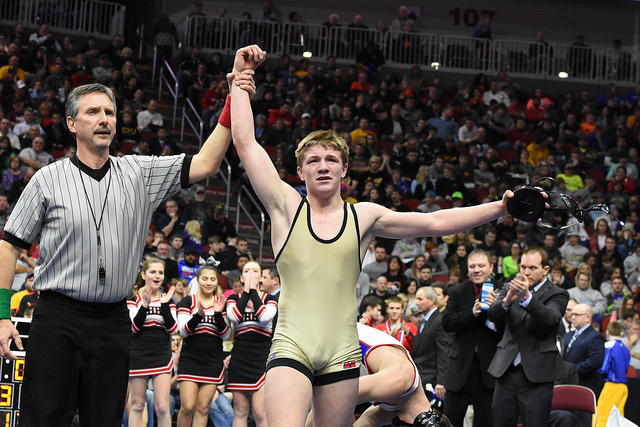 IA Wrestle: How does it feel to be an Iowa state champion?

Keaton Geerts: It feels great to be an Iowa state wrestling champ. I put in a lot more work this year than last, so it feels good for the hard work to payoff.

Who is someone significant that has supported you in your career?

My wrestling coach is Nick Hemann. He has helped me go to the wrestling club events, etc. over the summer.

How was your weight this season? There seemed to be some discussion that you might have been able to wrestle at 126, but wrestled up at 132 for the team.

Yes, I could have made 126 pounds if I wanted to but Coach Hemann wanted me to wrestle up at 132. I thought it would be good for the team to get a senior in the line up.

You train out at Elite Takedown Club, what do you like most about your club?

The club I go to is one of the greatest things because everyone there wants the same thing and that is to be the best in not only the state but in the world. Wrestling freestyle and Greco, and working out at the Elite Takedown Club have helped me a lot.

In 2015 you were one match from being a freestyle All-American, is that something that has played into motivation this season?

Being one match away from becoming an All-American, I want to push myself now in high school, so I can get even better and try to become an All-American in both styles.

I have had one interest from a college, UNI, but that’s the only one right now.