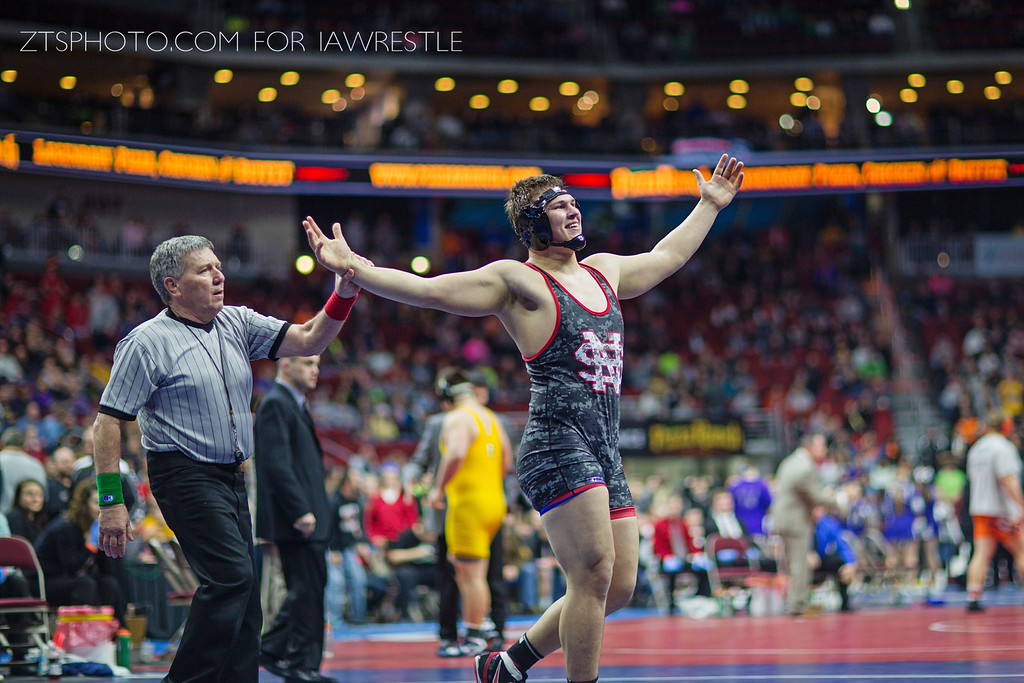 This past weekend Wyatt Wriedt of North Scott pulled off the shocker or all shockers when he defeated Southeast Polk’s Ethan Andersen in the 220 pound 3A finals. The win (along with an excellent 2015 summer which included a top four finish at Fargo) have moved Wriedt into the top 20 rankings on InterMat. Wyatt was kind enough to catch up with us to talk about his recent success.

IA Wrestle: How does it feel to be an Iowa state champion?

Wyatt Wriedt: It feels great winning a state title in front of tons of people and it was always a dream for me going up through the little kids room and watching high school kids win titles

Ethan Andersen has been one of the best wrestlers in Iowa for sometime, where did some of your confidence to know you could go out there and get the upset come from?

Some of my confidence came from seeing him beat last year at the Ed Winger. I knew he was beatable and I just went out, wrestled my match, and just had fun.

What is the biggest difference between where you were last year taking 3rd at HWT to this season. What improvements have you made to get you to where you are now?

I knew I had to work hard in the room this year, every day to get what I wanted. Last year getting pinned in the semifinals was a heart breaking feeling. I knew the feeling of losing in front of all those people and wasn’t going to let it happen again.

North Scott has had no shortage of elite upperweights over the last three years, what is it about your high school that does such a good job at developing the upperweights and getting you ready to perform at the state tournament?

It goes back to our strength and condition program. They help us so much with how good we able to move and how we are so good on our feet. The practices we have are very high pace and we never stop moving. The condition really comes in play when your wrestling bigger guy because in the second and third period you can just break them.

How did you celebrate your state title once you got away from the crowd?

I went back to our warm up area sat down and praised god for the win and helping me through the way.

What are your summer wrestling plans?

I plan on wrestling a lot of freestyle in my free time and going up to Fargo to wrestle up there.

Heading into your final year of high school have you received any interest from colleges, or do you have any colleges that you are interested in at this time?

A lot of colleges have been calling me. I might do an unofficial with Nebraska in the Spring.

One thought on “Overtime with North Scott’s Wyatt Wriedt”